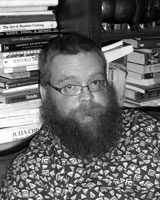 Marc Pietrzykowski lives in Lockport, NY, and has published poems, stories, essays, and reviews in various places. Following Ghosts Upriver is his most recent book of poems. You can visit Marc virtually at www.marcpski.com.

All these sad, broken towns
strewn with rusted oil drums
and pallets, stacked and rotting,
are my home, every one.
Along the Mohawk, the Niagara,
the oily Genesee,
run the tracks and the trains
and the passengers on their way
somewhere bright, somewhere
with a hint of glamour, somewhere
not like the dead little towns
they have left behind. I was born
under their rooflines, drank
from their sooty wells,
learned that their borders,
stubbled with briar,
were the edges of love; that grace
was a crumpled cardboard box
thrusting a flap skyward
from the sidewalk; and that
the evening fire beckoned to us
from the hearth
because it was dieing.
Watching the streets and the spaces
between them blur by, I know
I have been away too long in places bright
and not so glamorous,
but not so long, a voice humming up
from the engine tells me,
that I have forgotten
how to peel off my shoes
and pull a chair up beside the embers
and start to place my small sticks,
one by one, upon the coals.

In line at the business center
pretty kitty in a box
beneath his arm: no surprise
how that turned out, no refund
no return, tech support =
2 pints of plasma/hour.

And he needs his blood to eat,
and his clones all failed
in the summer heat,
his credit stamp a faded smear,
pretty kitty won’t get fixed
this year or any year, the way
his luck’s been going.

But the office must count
for something, as patriots insist,
and so he broadcasts his plea
on the afternoon feed:
Your President needs your help,
dignity, other heads of state,
Pretty Kitty! Please vote today.

They watch the numbers tick by,
pretty kitty a sack of wires,
Mr. President a sad old man–
sad enough for the referendum
to pass. Tech support, orange suits,
a blur in the oval office:
pretty kitty purrs at last.

Grinding up through the Cumberland gap
in a rented panel truck
stuffed with boxes of wine and oil,
umbrellas, socks, all the detritus
plucked and condensed from
the Kuiper belt of objects
drawn into orbit by the force of our habits
and our habits’ habits;
grinding up from Atlanta
and its nest in the piedmont,
from a New City full of nothing
but a surging tide of options
and derivatives, upon which floats
all the usual trophies desired
by souls who believe money
the fruit of all good. Atlanta is no
sprinting maiden stopping
for golden apples, nor is Hippomenes’
golden youth alive in the sun;
no, it is there, in the stall
at the edge of the crowd,
the one selling souvenir fruit
painted gold, and silver too–

Across the street a little girl screams
the way only children can: a scream
of delight, but still, every grown-up
in every yard turns their head to check.

She is taunting gravity with a puddle,
splashing banana-yellow boots down
into the muddy meltwater, drops
arcing out into space or bending back
to speckle the hem of her pink coat
and her improbably white leggings,
even up to the gleaming red coil
of her face.

She screams again when her mother
backhands her cheek, doubles its color,
and then once more as she is yanked
by the arm up to the house. More heads turn,
tsk, tsk, turn away. Above them, the moon
just now clearing the roofline is pocked
and scarred wherever bits of dust and rock
and ice have struck her, because the moon
has no atmosphere, all her scars come
in silence. Here on earth, scars
come silent and deafening and all
frequencies between, and so
we who are mostly water
must learn to build, layer by layer,
our own atmospheres, stripes of
troposphere, stratosphere, mesosphere,
sheathing to deflect
the smallest bolides and break
larger ones into fragments that flame
the night sky, so we might
make wishes at them.

But some among us never learn the trick
and instead remain as moons, noiseless
and present, craters and pocks aglow
for all to see, waxing and waning,
tugging the oceans of human love
to and fro. This night, the moon seems
to take up the whole of the sky, lighting
the street bone-blue; in such light
the girl’s mother comes out to the street
again, screaming herself now, into a cell phone.
In the upstairs window a small face, freshly
scrubbed, ashen, watching her mother’s body
bend and twitch and dream of velocity.