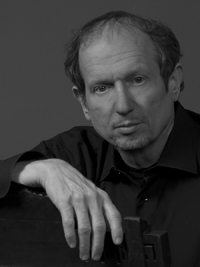 LeRoy Sorenson began writing when he was a teenager: essays, commentary pieces, short stories and poetry. He has worked as a child psychologist, political organizer and financial analyst. He was one of four poetry participants in the 2009—2010 Loft Mentor Series and graduated from the Loft’s Foreword program in December 2014. He was a semi-finalist for the Pablo Neruda Prize for Poetry given annually by the Nimrod International Journal of Prose and Poetry. His work has appeared in Briar Cliff Review, The Cider Press Review, Dr. T. J. Eckleburg Review, Nimrod, Pirene’s Fountain and other journals. He lives in St. Paul, MN with his wife, a novelist.

Here is America so American it’s almost Americana—soured by the hog plant’s exhaust and populated by suicides, preachers shouting Heal! and veterans facing double shots at a bar.  Here’s a gallery of haunted characters living in a place of sweet whiskey and sudden fornication, quick damnation on the jukeboxes a slow future that’s been strangled by the roots of a life-long grief.  Here are the blues, and boy do they sing! –Tony Barnstone

In LeRoy’s Sorenson’s poems we find a protagonist who confronts, in a truly remarkable way, the people and communities of the American Prairie; this is a protagonist who, having “escaped” the small towns he writes about, refuses to abandon them. And what more can we ask for? These are poems about family, religion (or lack of it), slaughterhouses, addiction, violence, difficult love, history and the enduring human desire for connection and tenderness against the odds. –Jude Nutter, author of The Curator of Silence and I Wish I Had a Heart Like Yours, Walt Whitman

In a language of visceral accuracy made memorable by narrative’s propulsion, Leroy Sorenson tells the story of the living and the dead—an American story of the seldom-seen bedrock people of the Midwest, prayer on the edge of their tongue poised like the last amen. Articulating a wide range of expression from intimately confessional to grandly oracular, these poems are concise in the mind: tight and sinewy in the mouth.  –Juliet Patterson, author of Threnody and The Truant Lover

The Haunting of Verna’s Farm

Her door knocks at the oddest times
and she runs toward the sound of company,
finds an empty night as the moon casts
a starved light over the farm yard.

In the spring, she spreads bread crumbs
for robins, crows cackle for their share.
God, she believes, watches over
her home like a green-eyed lover.

Her door knocks at the oddest times.
She flings it open to find her dead
husband, his hat in hand,
her love for him a lightning rod.

Gone too soon, he left her with worn
clothes alive with his odor,
a growing brood, tobacco pipes
with teeth scars on the stems.

Too many children died early—whooping
cough, pneumonia—night after night
of bitter gales freeze her tears and her face
withers with the need to call their names.

The old man and woman cling to their house,
their days limp from his rage, her sorrow.
Geese and chicken strut the yard and wolves
circle closer every day. They keep
the riffraff away. The days offer the same old
insult, the nights’ ghosts shimmering on
prairie’s edge. Sprouted wheat the sure sign
of decay. What is killing them is memory
and hope. The woman sees their children
romp from the barn, screaming in delight
and the old man lives in the days
when he tossed hay bales twenty feet.
They will not visit their dead
at the Mennonite church. If belief
is strong enough, the dead are wiped away
and the children return. Neighbors bring
crude bread and sweet apple pie
and the men sneak a bottle of corn to ease
the pain. At summer’s end, failing
to summon mercy and white clouds,
the couple dies in final denial. The wolves
enter the yard. The trees turn fire red.

No hills. Unchecked wind brings
words of the dead in a language
just north of English. Farms
scattered like matchsticks. Crows
circle miles away. On the farms,
houses stripped to shallow

gray, bare chapels hard earned.
They demand worship in coin unknown
to the young. Everyday magic consigned
to the pig sty. How can anyone measure
love here? On the plains, words

appear on the horizon, jump aboard gale—
a cheap ride to the next folly. Leave
the speakers dazed at their disappearance.
In some places, the dead and the living
are afterthoughts. Not here. Farmers
cling to what they know, who they
know. Their faces hard set against

prairie glare, the prayer on the edge
of their tongues poised for the last amen.