($7 if order from the MSR Online Bookstore)

T.J. Beckerman is unlucky in life and love. Newly divorced and struggling to make ends meet as an overworked and underpaid adjunct professor, he whiles away his evenings hopping from dive bar to dive bar with his two boozy friends. Skirt-chasing, but still pining for his ex-wife—who has a new love interest—Beckerman struggles to maintain a presence in his still-impressionable son’s life. Strapped for cash and desperate to pay his child support obligations, he takes a cue from a fellow professor and enters into a very questionable sideline—a shady business sure to end what little of an academic career he’s got left. Free Range Men is a modern day tragedy set in small-town Pennsylvania, told in a spare prose, and punctuated with dark humor.

“I got a one-bedroom apartment over the laundromat. $400.00 a month, all utilities included. Except for the occasional water bug in the kitchen, and the one incident of domestic violence on the third floor that left a man clinging to life after his wife stabbed him in the chest with a steak knife, it wasn’t bad. There was a twentysomething woman who lived above me. She was on the heavy side, but that didn’t stop her from entertaining weekend paramours. She was quite vocal during these encounters which could be heard clearly from my apartment—especially with the television off and the windows open. I bought a goldfish in a bowl. It died. The man stabbed with the steak knife survived, but later overdosed on prescription sleeping pills. He died, too.” 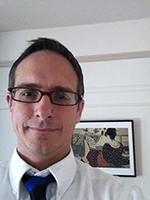 William Bryan Smith is a graduate of The Bennington Writing Seminars program at Bennington College, where he earned an MFA in Creative Writing and Literature. His work has appeared in such magazines and journals as Fresh Ink (the journal of the California Writers Club), Conte: a Journal of Narrative Writing, and Papyrus (the art history e-journal of Mansfield University). His short story, “Scottie’s Room,” appeared in Spectrum, the literary journal of the University of California-Santa Barbara, College of Creative Studies. He is the author of two novels: Buddy & the Jack (2002); and Starry Night (2005).

With Free Range Men, a picaresque tale that travels the terrain of sex, love, and poor decisions, William Bryan Smith proves himself that rare breed, a master of the tragicomic. He brilliantly brings to life a man who’s damaged, whose morals are questionable as often as not, a disaster to those around him, but an utter delight for the reader. A novella of downfall and redemption, Free Range Men goes to dark places, but is lit by the deep charm of the writing.  —Deborah Michel, author of Prosper in Love

“If you marry him, I’ll kill myself on your wedding day.”

I say it, only half-joking.

“I will shoot myself in the face on the steps of the church.”

“I won’t ever have another church wedding.”

“Outside of the Justice of the Peace then.” I think about it, imagine the blood, the gore. “Better yet, I will find out where you are honeymooning and I will kill myself in your hotel room—in your bed—while the two of you are cavorting in the surf. I’ll use a crossbow. It will be messy.”

“Who cavorts in the surf anymore?”

It is cold. The sky is gray-white and featureless. It’s a sky for hopeless Sundays in February, but it’s only Tuesday and January. We focus our attention on the side door to the school. There was a mix-up. I had wrongly assumed it was my turn to pick up James.

“I thought you had your yoga class,” I say.

“That’s the third Tuesday of every month. Did you forget?”

“No.” I pull my coat tight. If I learned anything in our twelve years of marriage, it was to never admit a thing.

There’s a hint of playfulness in her tone, her eyes. It could be that she remembers our dynamic, or a trick of light, or the two martinis I had with lunch.

“How could I forget?” I say. “Of course, yoga is the fourth Tuesday—”

“I got the Tuesday part right.”

“His first name is Jerry.”

“I don’t want to get that personal. He’s Bloom.”

She turns away to look toward the school.  The door opens. Some children spill out. This batch of kids are too small to be from James’s class.

“Are you going to marry him?”

“We haven’t discussed that. Even if we have, it’s none of your business.”

“You moved him in. It must be serious.”

“Obviously. Do you love him?” What I really want to know is does she love him more than she loved me.

“Why do this, Beckerman?” Her voice is full of compassion. Poor Beckerman. Poor, silly, Beckerman. “This is why we shouldn’t talk—”

“Jesus Christ. Do I like him? How old are you?”

It’s a valid question—hers, not mine. Frankly, I’m embarrassed by my level of neediness, of desperation. I’m still inexplicably tethered to the past. Not to the arguments, the dress-downs, the public humiliations, spilled drinks, flying spaghetti plates, dead dog, and (false) accusations of abuse—emotional and otherwise (and which have never been proven); but of the moments of fleeting tenderness, the soft kisses on the edge of dreaming, the fingertips trailing lightly on the back of my neck while driving, and the 7:00 AM blow-job wake up call.

I say, “I’m just having a little fun with you.”

From the up-turned corner of her mouth, I can see she is skeptical. Our entanglement of atoms has a stronger pull on me than her.

“How do you want to do James’s party?” she asks.

“What does that mean?”

“Where does he want to have it?”

“He’s a seven year-old boy. That’s what he likes.”

I can feel that I’m smirking.

“If you don’t want to pay anything at all, that’s fine. Jerry and I will—”

The door opens. More children come out. None of them are James. I steal a quick look at Brie. She’s wearing jeans. She looks good. Her hair is clean, healthy; she’s wearing makeup. It’s a complete turnaround from the final years of our marriage when she only wore sweatpants and an old Lawrence Taylor jersey.

“What are you still doing here?” she asks.

I almost tell her she looks good. It will get me nowhere. So, without a word—I leave.