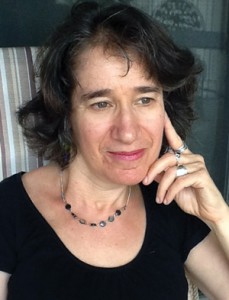 Ona Gritz’s poems have appeared in Ploughshares, Bellevue Literary Review, Seneca Review, Beauty is a Verb: The New Poetry of Disability and many other journals and anthologies. In 2007, she won the Inglis House Poetry Contest and the Late Blooms Poetry Postcard Competition and, in 2009, placed second for Lilith Magazine’s Charlotte Newberger Poetry Competition. Her chapbook of poems, Left Standing, was published by Finishing Line Press in 2005. Ona is also a children’s author, essayist, and columnist for the online journal, Literary Mama.

When a geode is cracked open, it has rugged edges and sparkles. Life is like this, but these poems are perfectly shaped. They are dense and clear as glass, or like mirrors. Although not “jagged,” they take risks —with intimacy, and risks with forms, veering in and out of concise lines and conversational moments. They break open to allow breath and double meanings; they imply rough-edged “stories,” but they feel smooth. They reflect the poet’s sensuous experience of being with her blind lover, of the joy in being heard, and in listening. These poems hold their pieces of “geode” in honor, and raise all parts of daily living to the light. –Madeline Tiger

Ona Gritz writes her life in a sequence of beautifully observed and crafted moments, with superb control, not a line out of line. Disabled yet unsparing of herself, she claims her kin. But her emotional depth, her honesty, and the clarity of her voice will reach every reader–she’s akin to us all. This is a fine collection. –Hettie Jones

Ona Gritz’s poems prove the unlikely – that it’s possible to dazzle with simplicity, an eloquent, apparently effortless simplicity that poem after poem registers emotional truths. Many poems in Geode explore what it means to live gracefully with a disability. I don’t know if Gritz has perfect pitch, but she has its poetic equivalent; she continually hits the right note, and moves us to a different sense of regard by her precisions and her exquisite sensibility. I love this book. –Stephen Dunn

I have been out of the water
three years, breathing air.
They have placed me waist deep,
my bottom hanging in the familiar wet
like a conch shell.
Beside me, standing rooted and tall,
father, uncle.
I do not yet know they are brothers.
I do not yet know I am here
because one of them entered water,
pulled me out.
In front of us water lifts
like a greedy tongue that could take me back.
I yell, “Over my head, it’s over my head”
and the men laugh,
raise me by the arms
into the air between them.
I think it’s magic to be lifted whole-bodied,
magic that they do it each time, saving my life.
I do not yet know this is my element,
run, like I am, by the moon.
I do not yet know I will come here,
sucking the salt from my hair,
loving the slap of waves on my bones,
letting it drip with a tap down my back.
I do not yet know I will come here
in dark hours with other men,
finding the water
I began collecting inside me on this day,
making it rise, dance, begin to seep.

Somewhere, I am still seventeen,
sealed in my father’s blue Barracuda,
hearing out his anger.
I am still being told
how I used to be good,
how they used to trust me,
now, I’m a stranger.
I’m still sticking
to the stitched white vinyl,
avoiding the eyes, their glint,
beer bottles on the sand.
Still, he’s saying a man of twenty
only wants one thing
and when I get pregnant
don’t come running to him.
I am still that girl who can’t explain
why my insides rise like tide
when I park by the beach to kiss.
I’m still leaning my head
on that streaked glass
taking it in–
how unfair a man is,
this man, the first one I loved.

I sit in the stilled car,
feet in tan sandals on the dash,
gauzy dress gathered to my knees.
It is two o’clock, the hour
we are supposed to be married.
But the justice is late and the young man
beside me taps a beat on the steering wheel,
studies an airplane’s vapor trail
like a chalk line drawn across the sky.
Lifting a can of juice to my lips,
I think about the flowers wilting in the back seat
and how fully I want to love.
Of course, anything one does fully
is a journey alone. But I don’t yet know this.
Not once do I glance at the dangling keys.

This was at his father’s funeral.
He spoke at the podium
and from the pews, sniffling,

shaky laughter, a low cry
from my own throat when he noted
the children he’d one day have

would never know their granddad.
My kids, I thought and tasted tears.
Afterwards, he looked for me.

Over a slow sea of heads
I saw him craning, calling.
My name a question

he repeated and repeated
until I broke through, reaching up
to hold his wide trembling back.

For a decade, I lay with that back pressed
against me in the dark, often recalling
how lost he seemed on that hardest of days.

It’s one reason I stayed.

My four-year-old picks this,
the homeliest of stones,
out of all the treasures
in the museum gift shop.
Though it looks like an egg
made from a slab of sidewalk,
he grasps it in his dimpled hand.
At home, I put it in an old sock
and let him pound it with a mallet.
All of this thrills him,
the noise, the destruction,
and finally the discovery.
Beauty can be jagged.
A broken thing can shine.