Girl on a Bridge 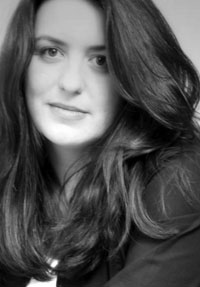 In addition to Girl on a Bridge, Suzanne Frischkorn is the author of Lit Windowpane, also from Main Street Rag Publishing (2008), and five chapbooks, most recently American Flamingo, (2008). Her poems appear in numerous journals and anthologies including, Ecotone, Indiana Review, Margie, Verse Daily and Conversation Pieces: Poems that Talk to Other Poems, part of Knopf’s Everyman’s Library Pocket Poets Series. A 2009 Emerging Writers Fellow of The Writer’s Center, her honors also include the Aldrich Poetry Award and an Artist Fellowship from the Connecticut Commission on Culture & Tourism.

Suzanne Frischkorn is a fierce and fearless poet. In Girl on a Bridge, she first upends our dainty notions of girlhood and then leads us into the wilderness of violence, madness, fear, and love — and does so with beauty and tenderness.

Julianna Baggott,
author of Lizzie Borden in Love
and Compulsions of Silkworms and Bees

Good citizens beware: Suzanne Frischkorn has let Girl on a Bridge loose on the world and she’s spreading the word about the furies of femininity and the madness of motherhood with its “stone weight of home.” These poems burn holes on the fairy tale pages of domestic fantasy and uncover the treacherous (though more exciting) narratives of those women who dare stray from the path or, at the very least, who celebrate their desires: “What’s more flattering than being wanted by a mouth that waters?” This book of finely-crafted verse holds up its poetry like a lovely razor blade.

–Rigoberto González
author of Other Fugitives and Other Strangers,
and So Often the Pitcher Goes to Water until it Breaks

–while purple flagstones
split with grass.

The same day a child next door
squeezed six new kittens dead.
That’s when I knew–

There are two shades of still.

Public Transportation
It doesn’t matter that a yellow leaf
spins cartwheels on the sidewalk,
or even that a few weeks earlier
it shimmied the green dance
of August like a 1920’s tart–
see it didn’t rustle it shimmied–
but that’s not the issue. Neither
is the Carnecia on the corner
of Dora Street and Cove Road,
whose signs exclaim Goat Meat,
Cow Feet and Turkey Wings,
while I sit behind the transit bus,
and study a logo blatantly ripped off
from Degas, with ad copy asking
“Pregnant? Birthright gives free
pregnancy tests.” The point
is–I turn to my left in disgust
and in front of the gray house
with white trim–here a tenth
of a mile from the projects–in
a yard no bigger than my bathroom,
grows a cornfield.

Chrysalis
Hair tangles signal three weeks of work,
each knot grows with each day in bed.
Once a woman,
a wife, a mother–
now a captive of the house,
tied and bound by sleep.

Taking a shower makes her sleepy.
Pulling bristles through her hair, too much work.
As dirty dishes seize the house,
she scouts sheets and pillows on the bed
for misplaced anger at her mother.
Tired of being a woman,

she wonders if the title wears out all women,
if females need more sleep.
She decides to take a nap, then be a mother.
‘Those synapses take a lot of work,’
she sighs and returns to bed.
Light retreats from the house.

She wants to be alone in the house,
resents that she’s a woman
who’s expected to get out of bed.
It doesn’t matter that death and sleep
share the same job, do the same work.
Guilt hovers over this mother,

who refuses to speak to her own mother.
She feels safe in the house
it’s the only talisman that works.
Makes her forget she used to be a woman
who never needed sleep,
and never stayed in bed.

“Hush. Sleep,” croons the bed.
Her eyelids darken the role of mother.
Even a prince could not disturb this sleep.
Once rested she’ll leave the house,
slip into the role of woman,
fix it so it works.

Soon the bed will not work,
and the woman becomes her mother,
even now while she sleeps in the house.