Hoyle Templeton is a good man, leading a simple life, who wants only to reestablish a relationship with his grown daughter. He reaches out to her, but soon realizes he must first confront his own failings to help her overcome her drug addiction and the demons of her past, in particular a violent ex-boyfriend. An exploration of the responsibilities of love, Golgotha is a heroic and tragic tale about the choices and sacrifices a father must make to protect and nurture his child. 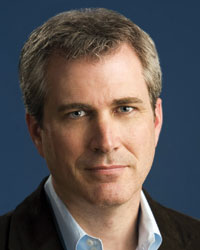 Rob Boisvert was born and raised in Massachusetts. To help support his family, he began working at a small library at age 13 where he first fell in love with reading, especially the short stories of Ernest Hemingway and William Faulkner. Other jobs include carpenter, stable hand, cook, and janitor.

After abandoning a career as a stockbroker, he moved to New York City to earn a living as a freelance writer for various newspapers and magazines. He has also lived in France, Spain, and Portugal.

Boisvert now works as a television news anchor in Charlotte, North Carolina. He has one son. Golgotha is his second book. His first book, Long Dead Lover, was also published by Main Street Rag (2008).

Hoyle wondered if he should be worried. He stood in the kitchen in the weak morning light seeping through the windows of the farmhouse inherited from his father and into which he moved many years ago after his divorce listening again to the message on his cell phone. The room smelled of coffee and fried bacon and the dryer sheet spinning around with a load of his clothes in the dryer in the mud room. A breeze from off the mountains ballooned the yellowed curtains above the sink. As he gazed at his old, orange cat crouched on the scuffed, wooden table and nibbling at a plate of half-eaten food, he was trying to figure out what the message meant, and whether he should do anything about it.

He’d noticed the message while eating breakfast, having picked up his phone next to his keys on the table to check the time and been surprised to see the two icons for a missed call and a message. The call was from his twenty-one-year-old daughter, Christine, and came in at 1:06 A.M. It contained only one word, “Daddy,” followed by thirty seconds or so of background noise in which he thought he heard passing cars and people shouting before going dead. He didn’t recognize the number, and got no answer when he tried calling it. Was her voice plaintive? Exhausted? Scared? Did she sound as if she was high? Drunk? Or maybe he was overreacting. Maybe it was no big deal and she was just calling because she needed money or a place to stay. He couldn’t decide. Listening to the message a third time, then grabbing his keys, he thought about phoning his ex-wife, thinking she might be able to shed some light on the reason for the call, but decided against it, considering how she felt about him.

Outside, where the air smelled like mud and something stringent like a broken sapling, he carried a bucket filled with grain from the small, timber frame barn about twenty yards from his house and inside a paddock in the ten-acre field rimmed by trees below the three mountains dubbed “The Skulls” by his father to three other buckets toppled in the dirt. The fence around the paddock was worn of paint, but sturdy and leaned outward only slightly as it disappeared into the woods. Already, the two bay geldings and one gray gelding were circling around him, snorting and making noises that sounded like raspy chuckles, the bays jostling him, and stabbing their heads into the buckets even before he finished pouring their grain. He waited a few moments until the bays were settled, then fed the gray about ten yards away from them, but as usual they abandoned their own feed and ran at the gray, heads down and necks stretched forward, driving it away, and ignoring him when he said, “Now you two get away from there. That ain’t yours.”

Hoyle remembered his father and how he interacted with the few horses he kept, and how the animals seemed to obey his every command. “They ain’t the brightest of beasts,” he heard his father say, “and it may take a while, but eventually they figure out right from wrong. Just keep at them.”

Hoyle took hold of the gray by its halter and led it into the barn where it smelled of warm wood and dust and old, brown hay and poured a scoop of grain into another bucket, saying, “It’s okay, boy. Some day they’ll learn some manners,” and petted the gray on the shoulder.

“Eat up quick, now,” he added before leaving and securing the gate and climbing into his pickup which he’d loaded for work the previous night.

Hoyle popped in a cassette tape of Eat a Peach by the Allman Brothers. Turning off the gravel drive running straight from the house about one hundred yards that bisected a much smaller field where his father once raised corn and melons, and his mother planted her kitchen garden, and onto NC 22 and accelerating toward the center of Krodel about seven miles distance, Hoyle made a mental note to call a neighbor to borrow his tractor and Bush Hog. The field lay fallow now. He’d allowed a few trees to grow in it, but preferred to keep it mostly clear, liking the feeling of not being penned in as he sat on the porch after work and drank a beer or two after dinner before heading inside and nodding off in front of the TV.

Krodel lay at the intersection of Route 251 which ran south to Asheville and north across the border into Tennessee. Driving on Main Street, and passing the Dollar General store, drug store, bank, and old movie theater someone from Raleigh once tried to convert into an art gallery and antiques emporium, Hoyle parked his truck in front of and entered the Deluxe Diner, a sandwich shop owned and operated by Mary Koontz, an elderly widow who local kids called Hairy Mary because of the downy hairs that grew from her chin. The shop was empty except for Dan Sheradin, a mechanic who sat at the counter reading a newspaper and talking to Mary.

“That’s why they’re going to win,” Hoyle heard him say as he poured himself a large coffee in a to-go cup and mixed in half-and-half and lots of sugar.

“I mean, you read about it all the time,” Dan said, pointing a finger to the paper. “The Chinese don’t care who they kill. A hundred people in a mine accident. A hundred more in a chemical spill. A couple thousand because of tainted milk. And that’s only the stuff they report. Imagine what the real number is.”

Hoyle stepped up to the counter to pay for his coffee. While pulling out his wallet, and extracting two dollar bills, he noticed Mary wasn’t wearing any shoes this morning, and that her white tube socks were filthy, as if she’d been walking in mud.

Dan grinned and slapped his hand against the countertop. “Ha! Because you know it’s true. That’s why.”

Dan swiveled his stool and turned to Hoyle. “You tell me if I’m wrong, Hoyle.”

“Let me just ask him,” Dan said, still grinning. “So Hoyle, I say America and China are eventually going to go to war, and that the Chinese will win. And that’s because they’re the way we were a hundred years ago. Ruthless and determined. They’ll do anything to make their country stronger and more advanced. Kill as many people as it takes.”

Hoyle nodded his head, as if he were following Dan’s train of thought, but was really trying to figure out why Mary wasn’t wearing any shoes.