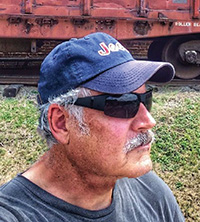 In Gone This Long: Southern Poems, Jeffrey Alfier takes his place alongside great American persona poem composers such as Tom Waits, Bruce Springsteen, James McMurtry, and Sufjan Stevens whose observations and empathy lead them to write from the underside of American life. Here is the testimony of farmers, waitresses, exotic dancers, workers, wishers, and hard-road dreamers, those “brawlers and drunks to be thrown out late at night, / as if they didn’t know what else but to be cold.” Listen: you’ll hear what it’s like to live on the edge. ~Jeanetta Calhoun Mish, Author of What I Learned at the War, 2017-18 Oklahoma State Poet Laureate

Breaking with Still Life at the Ranch Motel
Opelousas, Louisiana

3:20 am, and the widening horn of Acadiana Rail
seeped through my window, softly breaking my sleep
like the touch of a night nurse.

From my bed, I lean toward the window,
listened to the sound drift to silence, the way
late-comers finally did, a few doors down.

Between two notes of the horn’s retreat,
the hard slam of a door. Someone startled
out of sleep, realizing they never went home

Their footfalls hurried over pavement,
as another in the room they shared
rolled over, only to wake to the next train,

8:10 am — an alarm they did not set,
how they’d slumbered so deeply
as to nearly miss that sudden sound.

Cottonmouths slide to unlit worlds.
Catchfly and redstar bloom like blood on sawgrass.

Route 70’s strung out like a north-south trot line
flanking the miles along levee floodwalls.

Side streets of gravel and crushed shell
are the footwork of fallen angels, bummed

smokes hanging off their lips,
halter-tops faded to cheesecloth,

husbands gone to derrickhands
and drilling crews down on Wyandotte canal.

Between women trouble and hard weather
that tracks me like a mongrel, I take to my clapboard

Smoke from grills edges up into slash pine.
A shout, rooted in heartache, breaks from a doorway.

With my a/c broke, heat sticks close as a slow dance,
printing itself on my skin, like breath on a windowpane.

The shuttered Texaco
out on US 63
is a meth lab now
behind its soaped-out
windows. I know
who cooks it up,
know users’ names,
though they’re unaware I do.
I can name binge drinkers
leaving the corner market,
bags tucked tight under arms
like runaway toddlers.
None of that loser’s life for me.

Six days a week
I paint cars in Pine Bluff.
Never missed a day.
I swear by quiet weekends
home with mom and dad.
Some evenings we hunt
feral pigs rooting
fields near the swamp.
I bagged one once
down Hartley Dump way,
its teeth full of wildflowers,
the moon so intense
it could’ve burned the grass.