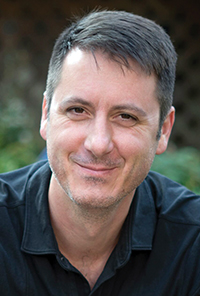 Jason Gebhardt’s poems have appeared in the Iron Horse Literary Review, Poet Lore, and The Southern Review, and his chapbook was a semi-finalist in the 2016 Frost Place Chapbook Competition. He has studied with Elizabeth Rees, Sandra Beasley, and Stanley Plumly.  In 2016 and 2017, he received Artist Fellowships awarded by the District of Columbia Commission on the Arts and Humanities. He lives in Washington, DC.

Sometimes, love is “After the gun / Love. Hyena laughing love.” Full of fresh, alert language, Good Housekeeping makes me fall in love with poetry again. Jason Gebhardt displaces the everyday into wonder, splicing in unexpected questions, wry humor, and Hollywood. Beware rabbits! Adopt highways. Realize “At any given moment within / the airport, there is / an exact count // of underwear pairs.” Read this collection. Never view an avocado the same way again. ~Sandra Beasley, author of Count the Waves

Above all else, what’s so stunning about Good Housekeeping is the overall largeness of this slim collection, in which the civic and the domestic, the playful and the elegiac keep rubbing against each other. These poems are precise, clear, wryly self-aware, and always grounded in the pleasures and limits of the body. Rarely have I encountered such a brilliant, promising debut. ~Wayne Miller

I really like this book. Not least of all because of Jason Gebhardt’s tumbling imagination, or most of all because his poems are kind and gentle. Maybe it’s because he knows the true nature of rakes, or loves his children and wife, or appreciates a clothesline of damp bras as much as he loves reading Anne Sexton while cooking dinner. Right now, writing this blurb, all I know is what you’re missing, and that I’ll never let this book go. ~Bob Hicok

I Love You as an Insurance Adjuster

After Kenneth Koch, “To You”

I love you as a sapper sweeps for mines
when I wake in the dark needing to piss.
I stagger to the toilet through the field
of your scattered shoes, and one buried
in the shag rug goes off, sending me
tumbling. How can I not then love you
as an insurance adjuster who should phone
the bean counters in Hartford to report
my twisted ankle, but instead dwells
on the precise contours of your breasts
and aches to comb for evidence in your hair,
having become just a love-struck suit,
who by night’s end can do nothing but fax
his claim to an unmanned office in Omaha?

From Here To Eternity & The Day After

of the director’s fingers.
The actors
at the waterline, fatigued
after so many takes
simulating
love.
How clean that shot was,
like war depicted in

my childhood, not unlike
the Rapture
—the sky
a blue sheet
settling on a bed
of prairie,
the tallgrass caressing
the actors’ mingled

thighs, then
the flash of the Lord’s strange
love, the roll
of smoke, not an ounce
of blood left over. Not one
pubic hair.
Again the baby’s asleep in
his stroller, and we’re nowhere

near a beach or even
Kansas.
No one is making it
through my fingers,
only those trees again
going white
with their semen
-scented blossoms

and the Cold
War still over. And not long
after it ended, we met
at 104th St. and 1996,
our floe, which cracked loose and
carried us down
the Hudson and through
the Narrows

into those bright, turbulent
waters of the parts
we were to be
offered
and the lines we continue
to deliver.

So I Adopted a Highway

along a small stretch of woods,
a thin patch of knee-high weeds
bordering the asphalt
on the westbound side, far from the city.
Like The AMERICAN LEGION
POST 77 to my east,
I have my own sign.

My friend mailed an orange jumpsuit
with this short poem stapled to the pocket:
Your roof leaks/ your front yard/
a death row/ powder blue hydrangeas
so dry/ you could sell them/
at a craft show. He titled it,
“What The Fuck Are You Doing?”

I thumb a reply on my BlackBerry,
now backlit in the falling dark: As if
I could mail you the twilight/
enclose the stars/ as they come out
of the closet/ over Shenandoah’s
tectonic ghostline. My forefinger
rounds Enter a few times,

but doesn’t press. Instead I grip the neck
of my Glad Force Flex trash bag—bursting
with a harvest of switch grass,
attic insulation, twelve dead soldiers
neatly lining their cardboard coffin—
and take a drag off the cigarette
that just flew out of a Buick.