The Advance Sale Discount price on this title has expired. For those who prefer to order by check, the price is $18/book (which includes shipping) and should be sent to: Main Street Rag, PO BOX 690100, Charlotte, NC 28227-7001. 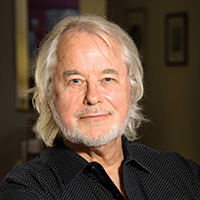 Lee Stockdale was born and raised in Coral Gables, Florida, and spent part of his childhood in Ireland, where his father served as Ambassador during the Kennedy administration. He inherited his love of language from his mother, the poet Alice Boyd Stockdale. He has written poetry throughout his life, winning the Sidney Lanier Poetry Prize among others. He earned his MFA from Queens University in 2017 and was selected as a Junior Fellow by the Library of Congress for its St. Mark’s Poetry Project. Lee and his wife, both veterans, live in the Western North Carolina mountains.

As I savored every word of Lee Stockdale’s captivating debut collection, Gorilla, I found myself again and again delighted by quirky leaps in logic and perspective, poems informed by a breadth and depth of knowledge and experience. Stockdale’s poems are sharp and witty, at times tender and heartbreaking. These beautifully crafted poems give testament to William Faulkner’s assessment of the human spirit–a spirit that will not only endure but prevail. ~Cathy Smith Bowers

Lee Stockdale, in his stark and memorable volume, Gorilla, takes head-on, fearlessly, the specter of mortality that looms and lords above us all. He dares it again and again and, ultimately, spits in its eye – with harrowing, surreal, and deadpan matter-of-fact razor-diction. At the heart of these poems is the speaker’s father’s death by suicide and the assassination of John F. Kennedy. Stockdale provocatively, often brilliantly, always hauntingly, conflates these two tragedies and, indeed, mythologizes them. Gorilla underscores the imagination’s dogged grip on survival, language’s alchemy in forging cosmos from chaos, how the spirit moves and bears witness. ~Joseph Bathanti, North Carolina Poet Laureate (2012-14) and author of Light at the Seam

In Lee Stockdale’s Gorilla national and personal traumas merge and deflect in surprising ways that are variously poignant, witty, or coruscating, yet always urgent, and enthralling. As memoir here tumbles into history, vivid portraits abound (JFK, the poet’s mother and father), and Stockdale edges along the borders of civic and intimate life, an American family and the American Empire. The irradiated core is an astonishing, multivalent story that is equal parts a childhood fable, his ancestral chronicle, and our collective hallucination.  ~Robert Polito

Each night Dufy’s Street Decked with Flags
goes crooked on the wall in our house.
Mother copied the painting with watercolors,
I inherited two of her Street Decked with Flags;
she must have been going through her French period.
The main flag hangs in the center of the painting
from a rope stretched tight between two buildings.
People stroll beneath the flags: men in straw hats,
a woman in a white apron outside a restaurant, a woman
with an umbrella. In my mother’s copies, but not Dufy’s
original, the flag at bottom left is torn open.
Through this tear my mother made, a figure appears
—darkened, smudged, unlike the others,
whose ghost makes the painting go crooked each night.

The Gorilla as a Boy

I was lucky she took me by the hand,
and pulled me from the shock of the freezing river,
where jagged ice moved past me at eye level,
legs too numb to kick, I couldn’t breathe,
an electric eel coiled around my chest.

The river stripped off whatever I was.
I rolled to the side to hide from her sight.
She lifted my body to the Miami sun
no Coppertone lotion armored me from,
pumped my chest so I squirted a fountain
of water between blue lips.

She took me to Boy’s Town,
bought me new pants, shirt, socks, shoes.
Now, she said, you look like other boys.
I stood in the mirror and had to admit,
I did look like a boy, not a gorilla.

From then on, everything seemed like a joke,
whatever a teacher said. Or my mother.
The funny thing was, nothing was funny.

Well, she asked, have you had enough?
She took me back to the icy river.
I turned it into the warm Mississippi,
where my father grew up on the banks, in Greenville.
I stood on the raft, a pirate, or boy,
just Huck Finn and me in the wide-open world.

The House Between the Towns

We’ll stop at dusk at the house I pass
between Kaiserslautern and Mühlbach
as the First Sergeant’s driver,
with its colored lights strung from posts like a café.

We will sit and laugh at the tables
set up outside and very close to the road,
as the Felliniesque father—why do we think he’s a dentist,
or was once a dentist—tells stories and clowns.

It’s comforting, and unusual, to have someone at the center
so gracious with the hospitality of his personality,
to say nothing of the wine and French bread that don’t stop.

Young people on scooters come and go all night.
Their laughter, hair, and radical ideas
fly in the breeze.

How many times have I passed this house
and known what I know now?

We will never return to our old lives.
We’ll be like migrating birds
who don’t go home.
We’ll find things to do,
make ourselves useful,
ride scooters.

is like the old kind, words are still “written” down like before, except they’re no longer “words,” but blockchain bits on Merkle trees, so whatever “words” a poet “timestamps” (writes) is “viewed” (read) virtually through its certificate of authenticity.

Someone who views the original timestamp, does not actually view the original Merkle bits, but an auto-generated computer near representation, which sounds inoptimal, but it’s not: Crypto poetry is a thousand times better, It’s been synthesized through countless computers. “Countless” is, of course, hyperbolic: by the time a crypto block gets to a viewer—all of whom must be certified authentic—the certificate of authenticity comes with the precise number of computers through which the blockchain bits have traveled. So the owner, by logging onto cryptopoetrycentralsystem dot com, may watch in real time as the number snowballs and explodes exponentially.

Like the “poem” my friend, Alex, sent me from Santa Fe, strained through crypto farms in Iceland, Russia, China, the Ukraine, and—wait! new numbers are coming in now! yes, from a location in Langley, Firginia, which gives me a warm feeling that it’s the real thing, and I’m viewing Alex’s authentic blockchain bits, and if any problem (“error”) is found—an unusual image, say, or concept “not recognized”—cryptobots homogenize in a split-second so nano it’s faster than anything recorded on earth or in space.