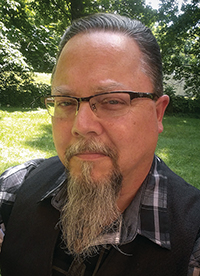 Larry D. Thacker is a Kentuckian writer and artist hailing from Johnson City, Tennessee, where he lives with his wife, Karin, and their cat, Abraham Lincoln. Besides Grave Robber Confessional, he is the author of numerous books, including the paranormal folk study, Mountain Mysteries, two chapbooks (Voice Hunting and Memory Train), and the full poetry collection, Drifting in Awe, with another full collection forthcoming in late 2019, entitled, Feasts of Evasion. His writing has appeared in over a hundred-and-fifty publications. His poetry and fiction MFA is earned from West Virginia Wesleyan College.

In Grave Robber Confessional, death is an obsessive and compelling preoccupation, Thacker’s gaze candid, ironic, amused yet soberly aware. The communities of the living and dead commingle, each with its own key to the cemeteries abounding here. These fine poems are rooted in the fleeting but sensual stuff of the world: body and bone, ash and clay, mountain and crow. The poet’s hands read the inverted “brail” of the stones, our own names soon enough. —Gaylord Brewer

In Grave Robber Confessional Larry Thacker encourages us to embrace death in authentic and tender poems that proclaim collectively: “Everywhere we step, death / hums an old, intimate song.” These poems visit boneyards and haunted houses, but also attend to some familiar markers of Thacker’s voice: loss of homeplaces, of communities, of fairness. Thacker has created poems with poignant melodies, gallows humor, and a confidence derived from understanding the essence and boundaries of our existence. ~Marianne Worthington, co-founder & poetry editor, Still: The Journal

I waver among so many choice visions,

as if I have a say in the matter, to be found
one day, perhaps, after a satisfactory day of writing,
hunched over and still, grinning at my desk, a good
and decent poem only just completed, no jerky script
trailing off the page, no forehead pressing
a final pun of pages worth of z’s out,

or after an afternoon of hard work
in the garden, rest coming nice and easy,
found in my beat-up recliner, the one
my wife sort of hates, poised half way back
in a balanced spot, where gravity doesn’t pull
on my legs and my head’s relaxed, the TV on
some rerun of Six Feet Under or The Walking Dead.

Time was when the vision surfaced loud
and violent, too easily dreamlike. I imagined it
messy, with an audience, scattered over a bloody field,
perhaps after I’d done the world a pretty good favor,
taken a few who’d earned it out with me.
A frozen half-smile hinting at the epiphany
of purpose found in a mundane hour.

No. Rather, I’m mellowing as the end
clears its throat. Whatever the end looks like,
may it be fairly bloodless, as a favor,
not so much for me, but for anyone
having to clean up behind me. Not quite
a passing-quietly-in-my-sleep-cliché-of-an-exit,
but maybe something with some humor to it.

As if I had a choice in the matter,
sometimes I find an old, overstuffed chair
in a busy antique mall, when the light’s failing
outside. Sit there motionless, never acknowledging
customers passing by, and nearly drift off to sleep
under the tune of a music box an aisle over,
wondering just how long the little song has left.

It’s knowing a hand well enough
to recognize his warming fingerprints
when they wrap her hand as she rests
in the ICU after open-heart surgery.

It’s lingering fingertips as hands
separate and she walks off to Belk
down the mall and he happily stays
with the Christmas bags on a bench.

Her love of his half-missing finger
mangled off by the table saw
as he cobbled up a new coffee table
for her fifty-seventh birthday.

As he cradles her perfumed wrist
to his never-fixed broken nose,
the one smashed outside the bar
where they met on a blind date.

The callouses of his palms reminding
of every dollar spent grocery shopping
or paying the light bill, of lotioning
his hands as they cracked in the winter.

He tells his friends he can’t fall asleep
without holding her hand every night,
but she knows it’s more about soothing
her when she mumbles in her sleep.

She held his hand, desperate to find
a pulse, dialing 911, after hitting his head
falling in the kitchen, after forgetting
to eat, again, his sugar bottoming out.

Her reminiscing in the hospital how
he’d read her palm as a silly excuse
to hold her hand on their first date,
massaging the IV purpling bruises.

Now stilled hands she crosses over
his chest as everyone begins arriving.

You can have my body for science,

but you’ll damned well earn it.
I’ve handled the preliminaries.
Find my signed donor card in my wallet,
along with a gym membership access card
I hardly used. It’s probably expired.
You can have what’s left of me
after a year in the grave. That’s right.

It’s not straight to the stainless steel table
for me if I have any say. There’ll be no
neat and official exhumation of my remains
in the pretty light of day for you. No,

I want it done in the fumbling, stinking night,
under terrible conditions, maybe a storm
moving in, dogs barking warnings
down the road, bird call in the trees,
a plan for begging forgiveness,
rather than asking permission brewing
in your mind. If I’m grinning when you get down
to me, you’ll know it was worth the wait.

Brush your ear by my lips while you’re working
occasionally. I’ll have something to say.