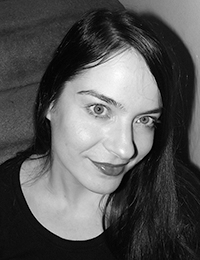 DeAnna Stephens holds an MFA from George Mason University. Twice-nominated for the Pushcart Prize, her work often explores the connection between regional geography and identity, in particular the theme of cultural estrangement. Her work has appeared most recently in Canadian Woman Studies, PoetryRepairs, and The Lascaux Review. She resides on Tennessee’s Cumberland Plateau where she teaches writing and literature at Roane State Community College in Crossville, Tennessee, and serves as a reader for Helen: A Literary Magazine.

Brimming with astute observations of rural life and crafted with uncanny sonic deftness, DeAnna Stephens’ prodigiously rich poetry pleases and unsettles with equal measure. Like a swig of good moonshine, Heliotaxis has the power to simultaneously intoxicate and clarify, to shock and reassure. This is a true poetry, where perceiving and imagining are poured in one pure stream, where lightning bugs at dusk can reveal “these woods’ rare edges”. ~Jeff Baker, Author of Whoop & Shush

To open DeAnna D. Stephens’s engaging book, Heliotaxis, is to travel to the mountains where blackberries are plentiful, and family is ever-present. But you won’t linger long in the succulent memories before you are pulled, like the poet, toward a longing to leave this troubled place. These poems will set you down in a vivid, complicated world, and they will lift you, as they lift the poet, toward a brighter place of hope and possibility. ~Barbara Presnell

Gallon blackberry hips
swing beneath my mother’s waist.
She wears my father’s belt like a tool belt,
looped through the handles of two
plastic, yellow milk jugs,
sliced at the neck. She is ever
ingenious, plucking each berry
from the vine, twining
her hand between the leaves
without the foliage suspecting
she is anything more than rain
or a bird. She works
this way for minutes,
painlessly,
until my father approaches,
grinning, stealing the fruit
from her side. He says he’s taking
me fishing. She says, Be
careful. She means don’t get
tetanus from barbed wire fences
or fall in the pond when he isn’t looking.
But he’s more mindful
than she thinks: He stamps his foot
on every barbed wire fence, compresses
each tier of rusted metal
to the earth, so I can step over
it. But he doesn’t clear
the path of brambles tugging
at my pant legs. He looks back
only once because it is
just ornery vegetation.
I won’t fail him by complaining
that those last few briers have distorted me
into something delicate, injected
me with apprehension about becoming
beautiful. I avoid the thickets
that would climb my thighs,
and, perhaps, make scars
like the ones across my mother’s
hips and abdomen. I wade through
the smaller ones, almost catching
up to my father. I focus
on him, tall and narrow
as a spruce pine, shifting
between the other trees. I could lose him
and never learn how to handle
a spiky-finned brim or how
to extract steel thorns from lips left
gaping at what we have done.

tussle in the womb of her purse, though her aunt calls it a pocketbook. There’s room for a Gideon’s and her hog bristle brush. A tube of bubblegum luster hides in the lining. The brush’s handle is a heavy paddle like teachers use. When she has those thoughts, she sneaks to an empty room of the house or church and spanks the palm of her hand. She thinks of women who are black and white and gray like cigarette ashes who rap the knuckles of children for what they do not know. But she knows. Fat drumsticks grease her lips at the church’s Christmas dinner. The preacher speaks of an indefensible nook in the heart, but he doesn’t say nook; he says sin. She wants a house with a breakfast nook and sunlight. She wants a bay window to sit before and lilies and grass and white trellises to cloister her from neighbors. The devil whispers in her head, while it lies sideways to the world. His voice is the blue insistence of a Bunsen burner, while the teacher is gone from the room.

Until my eighth month
in utero, my mother shaped hinges
in a Detroit factory, curled
their bolts’ diameters into snug
fists clenching each pin
so tractor-trailer doors
wouldn’t open spontaneously,
yield frozen Cornish hens
or Levi’s to windshields,
highways. At the stethoscope’s end,
the doctor had pronounced two heartbeats,
two babies. My mother imagined
the allantoid membrane
as a thick hinge pin,
each baby growing exponentially,
too quick for the eye to detect
like the wing beats of a sphinx moth,
faster than the thrum of steel needles
her sisters plunged through bolts
of polyester and denim
in a sky blue Southern factory
of sheet metal, windowless,
where women measured hours
in bobbins. She was better off.
Two dollars an hour, no place to sit
beat her sisters’ 75 cents,
their backbones that arced
over machines in their sleep.
She was buying a house,
would work until the babies
arrived. Baby. A solitary
spool uncoiling into completion,
assimilating what it entangled,
her blood, its weaker sibling’s
self—casualties
like brittle hinges,
the placenta forsaking its fetus,
or fabric sewn to fingers
with the wrong shade of thread.