The Advance Sale Discount price on this title has expired. For those who prefer to pay by check, the price is $18/book (which includes shipping) and should be sent to: Main Street Rag, PO BOX 690100, Charlotte, NC 28227-7001. 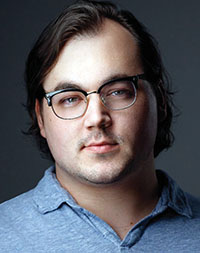 Eric Stiefel lives in Athens, Ohio with his dog, Violet. He is a PhD candidate at Ohio University, where he teaches poetry and composition and is an assistant poetry editor for New Ohio Review. He received the Sequestrum New Writer Award for Poetry in 2018, and his work has been nominated for a Pushcart Prize, the Penn Review Prize, and others. He earned his MFA from Washington University in St. Louis and his undergraduate degree from NYU. His work has been published in journals across the globe.

Though its title seems to announce a kind of playful nihilism, the poems of Eric Stiefel’s Hello Nothingness are surprisingly full of heart. It is a collection weighted by the vicissitudes of history, to be sure, peopled by the very objects subjected to its toll: crumbling statues, former lovers, a garden that has “lost its war with time.” But, like the lilacs “breeding” (in a nod to Eliot) from “dead land,” these scenes of destitution hover at the cusp of renewal, brimming with potential for new life. Stiefel, then, locates presence in the midst of ruin, reminding us over and again that — as he so eloquently puts it — “the palpable remains palpable even when it’s gone.” –John James

Eric Stiefel’s Hello Nothingness reads like the close narration of a dream one desperately wants to remember. “Life becomes a thicket” Stiefel writes, and as the narrator pushes away branches of memory and personal relationship, we are invited to view vistas of staggering beauty and grief. This is a generous and compelling collection. Unlike the dream landscapes we inhabit ourselves, this world you will not forget. ~Kyle McCord, author of Reunion of the Good Weather Suicide Cult

Each time I kill one of my old selves—or more often let him loose
into the static—I stumble on his shade sometime later, often
when the seasons have changed and the lilacs have withered
so that they, too, no longer resemble their former selves—

He was there, right there, standing in front of the meat market,
with a ring of brass keys in his hand, just watching
as the pedestrians idled by—

and I start to ask if I would recognize myself if seen
from any real distance, or would it all just blur, terribly,
so that there could be no gesture, no omen or ominous figure
lurking in the corner of one’s eye, and what

would I do then, what jar would I keep the days in, and how
would I order them or else unravel further into a blizzard of ideas,
and then what sense could I make of this before suddenly drifting away?

Tell Me Who I Am

and all I have from all of my yesterdays is
a smudge on an old polaroid—as if a pair of bees
could remember themselves out of honeycomb,

having fallen to the ground—I don’t know
who I am, not just the story of who I am—
the secrets I need answers to are watching

from the cedar-limbs by a pair of blackbirds
hidden in snow. Even the cupboards could hold
a gentle sheen or a soft glow, as if

a chain of memories could be mended, once
broken, when the moonlight pierces the reeds
and paints the sea the muddled green of grief.

If I chose to tread through this endlessness,
I’d start to imagine waves crashing and then
slowly molding a long white beach—

How do we hold ourselves against the abyss?

I’ve heard it said that if you open
the door to your body from before your body
was a vessel for this melancholy or
if you believed, truly believed, that your
spirit lives on elsewhere, if you believed
that the notes that Siobhan called forth,
as if from a trance, when the two of you
were alone, just the two of you, in a great
auditorium you had never seen during the day,
if you believed that her harp could still speak
to you, or if you believed that the smoke
from the censers swung by the priests from
your mother’s church could still strike
fear in you, or if you believed that
the maps between stars could hold
secrets that would still bewilder you—
if you could take back the days you lost,
before you had reason to lose them, before
you walked through flooded streets
and found peace in them, for once,
knowing that it would leave you, that
night would swallow you and you would
swallow your ghosts, only to neglect them
and then try to conjure them, desperately
wanting, no, needing to believe that
some child managed to survive inside of you,
someone to speak to or summon or at least
make contact with, some vision you’d once lost,
if only you could believe it, long enough to let
silhouettes of steam sing to you at sunrise, to rest
your head in wild grass as if you were
sleeping on rings of Saturn, to let yourself
sleep as if you could dare sleep to soothe you—