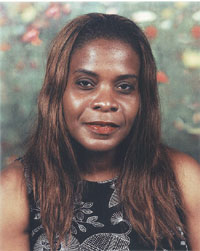 Romella D. Kitchens is a member of the Pittsburgh Poetry Exchange. She is an honors graduate of the University of Pittsburgh, with a double Masters Degree in Education and a Masters Degree in Special Education. Her poetry has been published in Essence Magazine, Catalyst Magazine, The New Pittsburgh Courier, Revista Americana, Kindred Spirits (now Chiron Review), 5AM Magazine, Ship Of Fools, The Pittsburgh Quarterly, Black Obsidian Journal, Iodine Poetry Journal, Shooting Star Review, Minus-7 Literary Magazine, The California Quarterly, Brevities Minimalist Poetry Magazine, Chapter & Verse in The Pittsburgh City Paper, Alpha Beat Soup, HeArt Magazine and, many more. She is also a fiction writer, performance poet and an artist.

She is a past member of The University of Pittsburgh’s Kuntu’s Writer’s Workshop. A poem written by her is included in the much esteemed Tsunami poetry collection, Only The Sea Keeps.

Look at me.
I’m a hip-hop warrior.
Tribal member of the urban war.
Using cocaine and low-brained
rifts and rhymes to score
my success.

But, even yes, I must confess
to the end of anyone, to anyone
in my way’s destruction.

Would I have been in
slave chains if I had
expounded upon the political?

I would say the observation is critical
that if you want money, you have
to call even users and abusers so
many “Yassuhs” it isn’t funny.

I will use you to climb up upon like
you are some wild but useful vine
and then, destroy you.

I can shoot another man.
Then, say it was all because of where he came from…
No matter how much he has done for me.
Hip-Hop Warrior… Progeny of when tribes were
tribes and, fought each other, sold those not native
blood bred brothers to European slavers.

I mean, pimp my ride.
All my bitches “glitter”.
I mean, I can do the impossible.

The car’s death slow its metal black bones
leaving legacies in a back lot at the projects
grass shoots up angrily between the
broken floor boards.

On the car’s back floor…
Old hypodermic needles, drinking alcohol
bottles emptied into the pained and discontented
bodies of angry young men.

4 boys and a younger girl.
Winter howls like a vicious coyote across the lot.
The boys 15& 16.
The girl ten years and three.

Libretto of the ghetto.
100 proof grain alcohol.
And, hating the smell of reefer
but, loving the release.

Wide like a woman the girl talked out of
her naive state shoved into the car’s back seat
boys on line waiting like jangling keys in the
wind.

No prom for her.
No quiet corsage or romantic pledge of adoration.
Dark falls like baled hay on the threshing floor of existence

Bigotry makes hard Black fathers.
Were you hard, father?
Did the words and threats
Stab deeply within you and
Thus re-create you?

On other days cod.

You would sit in the kitchen
With the correct posture and
Eat silently your jaw as tight,
Hard as the fork tines.

One day you weren’t hungry,
Seemingly.

One day, you were angry
Seemingly.

Your service revolver poised
On your lap just so.

You threatened to kill us all
Because a man in the newspaper
Had gotten tired of his family and done it
And, to you that was good.

We circled you seated on your
Favorite stool and you knew.
The floor tiles were clean and
Honest and we were not willing
To just go.

We circled you and were at the ready.
Mother stroked your cheek,
Softly talked you out of
Killing us simply because
You were angry with the
World.

You neatly re-boxed
Your gun.

Went to your room,
Looking old and tired.

We went to the mall.