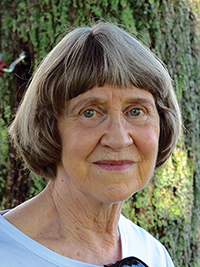 CAROL GRAMETBAUER’s poems have appeared or are forthcoming in Appalachian Heritage, Appalachian Journal, Connecticut River Review, POEM, The Cabinet (published by Potomac Review), The Kerf, The Notebook, Pine Mountain Sand & Gravel, The Sow’s Ear Poetry Review, and Third Wednesday; in the online journals drafthorse, Still: The Journal, Fluent, and Maypop; and in a number of anthologies. Her first chapbook, Now & Then, was released by Finishing Line Press in 2014. She lives in Kingston, Tennessee, where she is chairman of the board of directors of Tennessee Mountain Writers.

Thomas Wolfe tells us you can’t go home again, but in Homeplace, Carol Grametbauer’s new collection, the sure ground of home is alive and within reach. In these evocative poems, feel “the sun of a different century,” the shadowed thresholds still bright in memory. “Blink, and it’s gone,” she writes in aromatic detail of her forged roots. Sometimes memory restores us, sometimes it hinders our journey. Come along on Grametbauer’s restorative journey—the acres, porch, arbor, wakerobin, and bannister—held as dear as our very breath. —Linda Parsons, This Shaky Earth and Mother Land

Can half-remembered dreams be resurrected? Can a ghost town be re-peopled? Over and over again, Carol Grametbauer answers yes. Each of these poems does exactly that, beautifully recalling the dead and giving new life to a ‘Homeplace’ not yet faded away. –Denton Loving

HOMEPLACE offers deep gifts of memory, dreams, both past and present. Carol Grametbauer’s thoughtful personal voice and vivid sensory details create a world readers must believe in. The sense of place in each location paints the wonder of home—family, flora, birdsong—shadows and light—moments lost and re-found on this charmed human stage. In her scattered detritus of decades, these rich words murmur like echoes of forgotten/ voices in the waning light… —Bill Brown

She remembers the summers of her childhood,
leaf-green, the way in early June
they stretched ahead, long chains of days

in the near-dark. How the tarred patches
on her street bubbled in the noonday heat,
how the shade that pooled under the arching

branches of the mock orange by the back steps
created a cool cave she could read in for hours.
The rusty-gate calls of jays in the mornings,

bees bumping through the tall purple phlox
by her grandmother’s front porch, the honeyed
crunch of sweet corn and watermelon

at Sunday supper. And then the way
that gilded eternity was truncated at last
by the lure of new school shoes, fresh tablets

and pencils, summer’s loss ignored in the clamor
of the yellow bus’s squealing brakes, bright
chatter outside classroom doors. Now,

decades later, she stands at the kitchen window
and sips coffee, watches a cool drizzle
shake yellowed leaves from walnuts and sumac,

Another place lies close beneath this town
where I was raised – two-lane streets
under the four-lanes, all the storefronts different:
Schaffer’s Drugstore, Hummel’s IGA, the Isaly’s
dairy that burned one noon when I was seven,
struggled across a snake’s-nest of fire hoses
on my way back to school after lunch: the charred black
smell hung over the square for a week. Its sidewalks
teem with familiar faces – Smitty, the traffic cop;
my spinster kindergarten teacher; Great-Uncle Aussie
striding to the barbershop in his black high-top shoes,
vestige of a time when that century was young.
Reverend Conklin tapping his cane at the curb,
old Mrs. Schiltz with the huge goiter like a second head
protruding from her neck: admonished not to stare,
I could not tear my eyes away.

this buried place, its residents half-remembered dreams,
alive to fewer of us each year. Traces of it
can still be seen, but most lies buried
under the scattered detritus of decades, and below
that, older apparitions still—shuffling horses tied outside
the dry goods store, dusty roads scored by wagon wheels,
the bell on the German schoolhouse tolling on an autumn
morning. Blink, and it’s gone: Traffic piles up
at stoplights that mark every intersection, skateboards
rattle across parking lots, pedestrians stare into
their phones. Beneath it all, the ghost town sleeps.

Each spring sun-faced daffodils bloom
in scattered clumps along weed-covered
steps, golden beacons pointing the way
along an overgrown path to nowhere.
It’s set just off the trail through the woods
that must once have been a road. I climb

the short grade, wade through clumps of bittercress
and broken stems of last year’s blackberries
and try, as I do each time I visit,
to pace off the foundation. Scattered
blackened stones from the old fireplace
lie beneath a chaos of English ivy

and the first purple blooms of deadnettle:
I imagine the family gathered here,
parents, a grandparent, little ones
together telling stories on a blustery
evening, stew simmering in the cookpot,
chestnut coals glowing underneath. Once

I found in the weeds a button the size
of a penny, cracked with age, and stroked it
in my palm as if to conjure them
the way they were when the hearth stood firm
and the mortared walls sheltered them from the world,
floorboards echoed with their footsteps. Amid

the tumbled stones and broomsedge I heard
a garbled, low-pitched murmuring, like
muffled voices in the distance — so real
I wheeled around, saw just a ragged row
of cedars where the back door must have been,
scaly leaves rustling in the March wind.