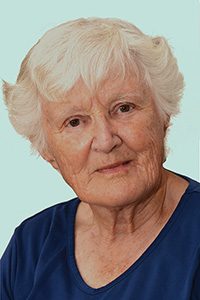 Maureen Eppstein has three poetry collections: Earthward, Rogue Wave at Glass Beach and Quickening. Her poetry has been nominated for a Pushcart Prize, has appeared in numerous journals and anthologies and has been featured in a university geology course and a National Audubon Society report. A former executive director of the Mendocino Coast Writers Conference, she has run a poetry reading series and taught poetry at the college level. Originally from Aotearoa New Zealand, she immigrated to the United States in 1967 and now lives on the Mendocino Coast of California.

In poems as lithe, shrewd and unified as shoreline plovers, Maureen Eppstein moves from a girlhood in New Zealand to an aging wise woman on California’s north coast. Contemplating the complexities and beauties of migrating, she paints tender portraits of the whales, swallows, foxes, frogs of her chosen home and allies herself with a snow goose, “at the tail end of a line of birds/ who tolerate our strangeness.” In Horizon Line, this entwining strangeness is the poet’s artistry, her gift.  ~Kathleen McClung, author of The Typists Play Monopoly

With keen eyes on the horizons of memory, Maureen Eppstein brings us the essentials of “music at the daylight’s edge.” Each poem is a world of its own, taken in by a mother, a friend, an observer who has witnessed the losses alongside the gifts – the gray whales, the clock, the “subtle tug” of a fish, felt for decades. The power of these poems lies in their smallest details, which reveal a lingering “ecstasy of urgent light.” ~Maya Khosla, author of All the Fires of Wind and Light.

To limn a life in perspective
the artist first defines
a horizon line eye level to the viewer.

From my hill of years the horizon
is fluid as in watery, but also
as in unpredictable.

On the sea’s face a wall of fog
moves in and out like histories
remembered and forgotten.

Sometimes silver striates the sea
with such a glitter of insight
I am bedazzled and cannot look.

so that I stand on the shore
dwarfed by a surf of knowledge
that pounds at my ignorance.

Sometimes the sea becomes invisible
the white air a questioning emptiness
a finger-touch of damp against the cheek.

Detritus of kelp and crab parts
mark the undulating border of low tide.
Clouds of flies rise
from patches of bedraggled purple fur:
sand dollars, half-decayed
torn by surf from their sea-bed home.

Old letters from a college friend
with photographs:
three girls with white-blond hair.
One young woman visited.
I gave her a keepsake—
a sand dollar shell.

I forget now
which of my friend’s three daughters
this one was.
My lapse sits lumpily in my mind
like sand that fills my sneakers as I walk.

I find three perfect shells
still blotched with purple, not long dead.
Each bears the delicate insignia
of opening petals.

picked almost clean by refugees
tell stories of their loss
their black and mangled cars
and solitary chimney towers
looming from ashen voids.

As if we too were jerked awake
at 2:00 am by smell of smoke
or neighbors pounding on the door
and fled in our pajamas
from a roar of flame.

As if we could reverse the clock
un-dream the images
we tell ourselves that
once the bag is packed
we will be safe.