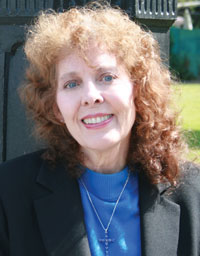 Sara Claytor spent her childhood years surrounded by red dirt roads in Warren County, NC and most of her adult years around Chapel Hill, NC. A former teacher of literature, writing and communications, she holds two graduate degrees from UNC-CH. Recipient of numerous poetry prizes, she has also won first place in such short fiction competitions as the Elizabeth Simpson Smith Award and the Virginia Highlands Festival. Along the way, she co-edited the Internet literary magazine The Moonwort Review and worked as fiction editor for a small press specializing in mystery-suspense. Her chapbook Reviving the Damsel Fish was published by Pudding House Publications (2007). Today, she is grateful for super children and grandchildren, long-time friends and former students, and loves that never die.

Howling on Red Dirt Roads curves memory’s experiences through writhing humanity, often where recall momentarily stumps itself. And memory gets close to the bone. Family relationships, the past, humor, drama, time—all shape Sara Claytor’s stories in these verses. The colorline—with solid certainty—shines especially here in poetry I cannot forget.

Howling on Red Dirt Roads is a hand-drawn map. You think you know the South? This poet is about to show you new scenery. Forget the main road, the journey that ends where it began. “What is the point to the circle?” Sara Claytor asks. With imagery that’s unique, both tough and tender, Claytor reveals that there are secrets and ghosts in every house. Slow down, she says, listen; there are silent cries.

Sara Claytor’s poetic voice is like that of the storyteller whom you randomly encounter, to whom you are still listening, enraptured, several hours later. Her poems are brimming with eccentric characters and compelling details. I think it’s a bit limiting to say that she’s a southern poet, but the south definitely breathes in her work, both its exquisite charm and haunting darkness. Her poems flow, page after page, delivered with wisdom, humor, and a profound sense of optimism—that life, in the end, is indeed a splendid thing.

Miz Southern Belle
committed to tradition, bound by heritage
wearing a full length mink coat to a bar-be-que
rituals of mourning with sherry sedatives
wedding receptions at the country club
contradictory, confusing
marshmallow on the outside
a Mack truck on the inside
azaleas blooming in hot pink

Strip to the Soul

Thousands of eyes have roamed my body;
they bore me as they bore into me, invading
my secret crevices. Idiots! They should be
home with wives, feeding children macaroni and cheese.

I curl my legs around the stage pole, my breasts
quivering, hump in rhythm to music. It is nothing personal.
Look at the goof leaning on the stage, light patterns flashing
on baldhead, chewing his lips like a fish puckering for air.

In the side room, slow lap dance with my sweet tush
sliding his torso, slapping hands from my flesh–raw hands,
pudgy hands, dirty fingernails–I’ve felt them all.
I’ll whisper to his mouth, tempting with my tongue tip,

tell him lies, “Feels good, baby. You turn me on, baby.”
Give him the illusion before he flips my G-string,
pastes money against my hipbone, leaves smiling.
I knew I’d take his dollars and more.

Foolish flutters in this false zone;
clatter of laughs, clink of bottles,
super sluts tweaking pink tits.
Only six more months; I pay off my debts.

At home I feed my goldfish, read Yeats,
scrub skin ’til my bones tingle, melt away
the scents of sin, seek my soul in soap,
my prayers yet to be whispered in the dark.

When I smell Clorox, I see your teeth simmering
like bone ash on asphalt, your head cap of pigtails
tinted red, the freckles scattered across your cheeks.

You were my black mother in starched fruit-patterned
aprons, pink velveteen palms flashing as you fluted
piecrusts, ironed white sheets with perfect edges.

You told me haint stories, sewed colorful feed sack
dresses for my dolls, introduced me to radio hymns,
gospel, boogie beats. Together, we sang for Jesus,
clapping our hands, shaking our shoulders.

Once I went to your African-Methodist Church
where we danced in the aisles and shouted Amen’s.
I ate three pieces of chocolate cake at the noon lunch.
Stomach aching, I was sick in the outhouse while you held
my head. Afterwards, the church ladies fed me ice cubes
and gushed over my long, blonde curls.

On the screened back porch, the white mother served you
food in a stained tin plate, iced tea in a Mason jar. Your
bathroom was behind the garage. The white mother always
checked to see if you had stolen her dime store jewelry.

You didn’t know pain in your belly from me or a stretching
of the thighs; no one told me about invisible fences
separating mother loves.

Part of my heart moved down that red dirt road to your house
with its blue porch rocking chair and yellow birdhouse nailed
above the tin roof. I was your ‘baby gal,’ even after I graduated
from college, visited you last in a nursing home where you kept
a photo of blonde three-year-old me tacked on the wall above
your bed?right beside the picture of a white Jesus.