I Never Learned to Pray 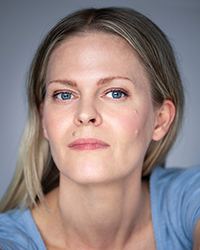 Estelle Bajou is a French-American polymath. Her poetry received a 2023 Best of the Net nomination, a 2021 Pushcart Prize nomination, and is featured in Broad River Review, California Quarterly, Heavy Feather Review, Sheila-Na-Gig, SWIMM, This Broken Shore, and elsewhere. I Never Learned to Pray, her debut poetry collection, was longlisted for the C&R Press Poetry Award. She’s also a playwright, screenwriter, and visual artist, and her acting and composing work in film and theater has earned her critical praise and several awards. www.estellebajou.com

Estelle Bajou has a cold and discerning eye, a warm heart, and a poetic voice that is all her own. And she is not afraid to be true to all of them. The poems in I Never Learned to Pray open a door to a world that is at once starkly real, human, and beautiful. ~Daniel Weeks, Author of For Now: New and Collected Poems, 1979-2017

In these poems by Estelle Bajou there is an incisiveness and a distinct poetic voice that often rises to a kind of lamentation. Whether she surveys the conflicted state of man, or of nature, or reflects on the posited hopes or failings of the most intimate of relationships, she never averts her gaze. Her lines are carefully chiseled and seem effortless and reflect the hard-earned craft of a mature poet. ~Gabor Barabas

So much of Estelle Bajou’s I Never Learned to Pray sounds like prayer: “A stubbornness appears…like cold, blue dye/through still water under light” or “We will only die as bees succumbing to the fragrance of a flower.” “What I Hear, I Hear” ends with “my mouth/Forms a dilatory/O,” the reader’s exclamation after many of these sad and sharp poems.” ~Terese Svoboda, Guggenheim Fellow, author of Theatrix: Poetry Plays

IF I EVER FEEL LONELY

Am I a meadow opening like a pair of legs to a sultry sky?
A stretch of highway forsaking the last wild place?
A turtle scuttling across a highway to a meadow?
Do I stop my shivering car to help?
My anxious body jerks in its shell.

I am a pebble in the lung.

I once heard of a man who cut up his babies and cooked them,
Sliced open his wife’s belly and sewed them back in, saying:
I don’t love you. I love my tribe.
I am the powerless sound of his voice.
The frying pan. Final blink. Stunned knife in the bright room.
Sound of keening in the bathroom. Soap in the dish.
Blood in the veins. Feet on the coals. Heat in the fire.

I am a blossom becoming an apple. Bee. Insecticide.
Spray nozzle. Hand spraying. Flight to the next flower.
The one sting before death. Sound of thunder.
I am a young bird on a branch, watching.

I am dark matter: invisible but for the things around me.

Isn’t it awfully moving to be surrounded and alone?
Isn’t it like your own teeth ripping through skin to be together?
Isn’t it like a planet cooking in the constant light on a spinning spit?

If I ever feel lonely, it is because we are all one.
Are we not like a song disbanding in the air?

From my windowsill perch
I see a man
My neighbor, a stranger
Exit the building
Across the street
Dignified, middle-aged, Black
With short hair and glasses
A neat salt-and-pepper beard
Wearing slacks and a winter coat

Turns east toward the subway
And the sleeping sun
Pulling on a mask
Crossing himself twice in a row
Sensible, sad, I think

I think
Is he a doctor? I wonder if he’s a doctor
Or a nurse
Or a grocery store manager
Or a bus driver
Or a policeman
Or a county official
Or a delivery person
Blessing the essential workday
Ahead of him

Kid says nothing, swallows a handful of pushpins. Other kid raises her eyebrows, impressed. They’re standing at the bottom of the crevice between two high-desert boulders at least seven stories tall.

Kid looks at the other kid’s mouth as little drops of blood pool at the corners, and a line of blood forms
between the lips, and thinks:

There’s got to be another way out.

The very soft sound of a bell from down there signifies the time has come to clap.

Kid claps. Other kid claps too.

Because I’m watching from on top of the west boulder, I don’t hear the bell, so I don’t know to clap.

Because I’m watching from on top of the west boulder, I’m not close enough to see my kid has made a political statement and is preparing to die for her beliefs.

If this was the state of New York, would I be guilty of child endangerment?

Dear Kid,
You were born in the year of the Dog. Be careful. Are you wearing red underwear? Oh what nonsense. Sorry about that.
Love

Dear Kid,
What do you want me to say? Fuck up. Try and learn something. That’s pretty much the only thing I sort of know. Though it hasn’t exactly worked out great for me either, so. Take it with a grain of. Oh fuck it. I’m bad at advice.
Love,

What are you doing down there?
Do you realize how profoundly special you are?

Way past infancy, your eyes are still changing colors. Your feet and hands are too big, like a puppy’s.

What are you guys doing down there? Who’s your friend?

I get worried and start climbing down into the crevice. If we die down there, our remains will be very well preserved because it’s the desert.

If we die down there, who will bear our bodies north? Who will fear our return? Who will hang our clean, dry bones in a museum? Who’ll wash our dishes? Our clothes?

I’m still way above you with one hand slipping and one foot flailing in the air.

Did I tell you about the elders and the bluebells and the King of Swords and your bright, your very bright, bright future? Kid? Other kid? Can you hear me? This is no time for a nap.