If You Turned Around Quickly 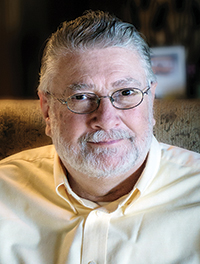 In 2006 The Backwaters Press published his first book of poems entitled Dare. He has worked as a truck driver, weed whacker, garbage man, teacher, tutor, substitute teacher, and administrator. He has taught creative writing at the University of Arkansas, Univeristy of Nebraksa at Omaha, and at Creighton University.

His awards include an Intro Journals Award for Poetry from AWP, two Lily Peter Fellowships, a Pushcart Nomination, the Holt Prize for Poetry, and National Finalist for the Ruth Lily Prize. In 2003, he received an encouragement award from the Nebraska Arts Council.

The book title expresses its aesthetic. Its poems present arresting images, incisive economies of diction. Seeming fragments leap from contexts to startle us. Our lives’ often imponderable patterns blaze up in sudden unforgettable insights, disorders clarify– even if briefly–crystallize. “I pedal a hot curve of asphalt/ … glide under sprinklers” captures an essence of childhood. An amazingly intricate villanelle builds through complexities to yield this irrefutable truth: “We are what we sought.” —Greg Kuzma

If You Turned Around Quickly is a volume of sharp observations in well-crafted poems, where time is a major player, moving them both physically and emotionally, and where head-and tail-lights are “Always/ the traffic to remind/ us we breathe.” Catherwood makes imaginative use of form, repetition and rhyme, transforming cars, trash cans, shopping malls, bars, box cars, gravel roads and gritty asphalt into engaging poems that “…bluff/ my bones until they’re stunned/ into the dance….” —Twyla M. Hansen, Nebraska State Poet Laureate, Dirt Songs: A Plains Duet

If you’re in the mood for pastoral melodies, look elsewhere. These poems are played in a minor key, with both power and finesse. They’re about entropy and mortality, observed mainly in a part of the blue-collar Midwest where bars function as retreats from a hardscrabble existence. But beneath the grimness, a muted beauty abides. Thanks to Catherwood’s artistry and passion, If You Turn Around Quickly offers compelling music about haunted lives in a haunted landscape. –William Trowbridge, Poet Laureate of Missouri

In those old photographs they all look so
smug, cigs dangling from their pampered hands,
the black and white sheen slick with promise,
a serious smirk across the endless luminosity

hidden in those colossal brains. Auden, Kees,
even Lowell looking quite confident, Berryman,
his shaking hand out of shot. And the pic of H.D.
makes me nervous, the images burning like suns

under her eyelids. Oh, the seriousness of it all.
No doubt we could not carry their cast offs,
the poems marked up and shoved into shoeboxes
buried in the east on muddy banks—

those pages running out across oceans,
where all the secret fires are hidden.

There it splays in winter trees
for just this moment,
the play among the gray, the bark

cleansed by snow, the branches
gouged by frantic squirrels, across
from the sloping porch, the railings

sunken into the bare wood, each
thing reflected in the other, throwing
shadows like foil into the melting street

that sit on the wet slick wires
threaded to the sky like music lines
where shadows creep into this room.

March and the predictions said snow.
I watched the white daggers descend from the sky,
ignored the newscasts, the slobbering weather anchors
delighting in their snobbish knowledge.

Of course the snow began as rain, then sleet.
I thought about a good bowl of chili,
a chilled Sapphire and tonic. I sat at the restaurant
and refused the usual talk about the weather.

“I’m from Nebraska,” I told them. “A little spit.
A tiny dark cloud. It will all be over,” I said.
Well, we all know what happened, for the most part.
But the turn is not in the restaurant or in the gin.

The turn is in the stranded nature of things.
How life beats itself back into collateral amusement,
the short left hook, the stubbed toe,
the sudden thunder of a blown tire.

No. A large woman drove me across town, snow
gusting and cracking against my better judgment.
And this poem is about judgment.