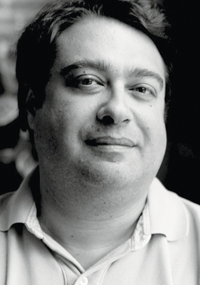 Born in New York City, Justin Vicari was raised in Pittsburgh where he currently lives. His first collection of poems, The Professional Weepers (Pavement Saw, 2011), won the Transcontinental Award. He is the author of six books of film, literary and cultural theory, including Mad Muses and the Early Surrealists (McFarland, 2012) and Nicolas Winding Refn and the Violence of Art (McFarland, 2014), and also the translator of works by Paul Éluard, J.-K. Huysmans, Octave Mirbeau and Philippe Soupault.

Justin Vicari’s wrenching, poignantly evocative book of poems, In Search of Lost Joy, is the work of a master poet whose poems are steeped in literary traditions but utterly fresh and compelling. There is the nod to Proust, Whitman, O’Hara and Ashbery, but as the speaker looks back at his youth in the Eighties as a lonely naïf, a “tadpole in a tight polyester shirt,” we are in the gritty world of hunger and regret, “gray silence” and unopened doors. The stunning Astarte Sonnets alone are worth the price of admission. Read these poems. Read them again. Read them aloud. —Joan E. Bauer

“At eighteen I still believed I was an unkempt room,” Vicari writes in his powerful new collection, In Search of Lost Joy. From a sonnet sequence that invokes the ancient goddess Astarte, to poems about family, isolation and unrequited love, we find the poet in middle age, finally breaking free of those shackles that “in time we came to resemble” — some self-imposed, some imposed by society. These are poems of victory and reinvention. They shout from the rooftops and gutters, with the wild abandon of a voice long held silent, laying proud claim to the self. “For the first time I knew what I was,” the speaker of “I Just Wanna Be Your Everything” says as he recalls watching Andy Gibb sing on TV. In the end we are who and what we are, for better or for worse, and these poems prove that if we only believe in ourselves, we can be whoever we want, and can own it. —Jason Irwin

At eighteen I still believed
I was an unkempt room
needing a woman’s organizing eye.
She used to trot beside me on the street,
clapping her small hands to stay warm
in the winter weather.
Come spring, she liked the way
I pulled down a high branch to smell a forsythia.
I don’t recall how it smelled
or how I felt toward her
except as allegory.

Relieved, sure, that a woman
liked The Young Man I Tried To Be.

To Be Exposed, my Lack Of Genuine Interest
in her Disturbing to my mind.

Yet, when she said I looked good in yellow
and should wear more yellow,
I wore my cable-knit yellow sweater confidently.
Everything under the sweater
was what yelped in unease.
Later I came to decide I
looked better in green. Or,
on a good day, nothing at all,
kneeling as a kindly man approaches.
I reach out and draw down his bough
to smell the flower. I know exactly
how it smells, and how I feel.

I wonder if this was how my mother felt

when my father made love with her. I’m lying
under this guy, his cold belly scooping

the small of my back, his dick sinking in me.
I’d like to say this fuck means as much to me,
but he is temporary assuagement. Even now,

as he climbs the ladder of his coming, I imagine
my rooms released of him, me
back to my own moves and thoughts,

not bent over in this admittedly silly position
I need to be in, right at this moment.
The different generations of panacea:

only one penis, my dad’s,
she knew her whole life. My belated bathhouse is
a dating site, pool of suburbanite studs,

but I wonder — now when I finally feel
pinned, found, identified, blessedly
identified, as if a waxy butterfly

flapped in joy at the collector’s pin-prick —
if this was how it felt for her,
same anonymous joy I feel

rumbling, hiding in this sharing of my private skin.

WHEN YOU GET TO BE WATER

I told him I was in love with him.

He was straight and played guitar
in a local rock band.
I’d see him sometimes in Chiefs.
One afternoon on South Side,
he pulled up in his car
howling my name.

happy to be found again.
He parked by the river, we smoked
a joint. My lips sucked
the moistened end his lips sucked,
closest we ever came to a kiss.

When you are dry Land
you yearn to be Water.
Solemn, lucid flood upon the world.

When you get to be Water,
perhaps you yearn to be
Air: ungraspable dancing.

He had to be somewhere
so he dropped me off,
smelling like weed and his old car,
dazed with a love I still felt.