In the Room of Thirsts and Hungers by Indigo Moor 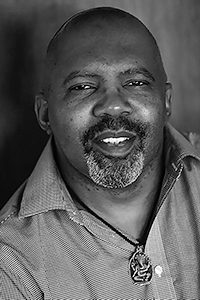 Poet Laureate of Sacramento, Indigo Moor is also a scriptwriter and author. His first book, Tap-Root, was published as part of Main Street Rag’s Editor’s Select Poetry Series. His second book of poetry, Through the Stonecutter’s Window, won Northwestern University Press’s Cave Canem prize. As with Tap-Root, Indigo’s 2017 release, In the Room of Thirsts & Hungers, is an Editor’s Select choice from Main Street Rag.

Three of his short plays, Harvest, Shuffling, and The Red and Yellow Quartet debuted at the 60 Million Plus Theatre’s Spring Playwright’s festival. His full-length stageplay, Live! at the Excelsior, was a finalist for the Images Theatre Playwright Award and has been optioned for a full-length film.

Indigo teaches at the Stonecoast MFA Program, where he graduated in 2012 with an MFA in poetry, fiction, and scriptwriting. He is on the advisory board for the Sacramento Poetry Center, a Cave Canem fellow, the resident artist at 916 ink, and a graduate member of the Artist’s Residency Institute for Teaching Artists.

In these ‘Broken Sonnets,’ Indigo Moor holds a reflecting glass between Othello the Moor and Paul Robeson, the actor, scholar, and equal rights activist who portrayed Othello in the America of racial oppression and Communist witch hunts. This immensely ambitious collection contains a history of race and the legacy of the slavery in Shakespeare’s time that culminated in the driving of the Moors out of Catholic Spain. On the other side of the mirror are the 1900s of Paul Robeson: lynch mobs, blackface minstrel shows, Jim Crow, and the persecution of Negros. This book is a populous mirror, reflecting a cast of characters from Iago to Joe McCarthy, Desdemona to Langston Hughes, W.E.B. Du Bois and others. In the Room of Thirsts & Hungers reverses our understandings of these two complicated, proud men and makes them shine in the glaze of our refractions. This is one hell of a book. You can’t look away from it. It’s looking back at you. —TONY BARNSTONE, author of Pulp Sonnets

The interlacing narratives of In the Room of Thirsts & Hungers suggests that our world is nothing so much as a mirror, revealing who we are and have always been. These carefully-wrought and brightly-imagined poems are both timely and timeless. Indigo Moor has written a necessary book. —CAMILLE T. DUNGY, author of Trophic Cascade

In the Room of Thirsts & Hungers is a duet between men and ideas. Paul Robeson was once viewed as the tallest tree in the forest. Here, Moor gathers his leaves and turns them into words. Somewhere Shakespeare is tapping his fingers. The work glitters from remembering. This book is filled with surprise which, at times, becomes magical. —E. ETHELBERT MILLER, author of The Fifth Inning

A Bullfight, a Revolution, and a Langston

Fondling a gin flask, Hemingway quips “we should live
In the ring, not die on our butts.” The matador executes
Verónica, wiping the brow of a two-ton Christ. Today,
There are no Nationalists, no Loyalists, only Spaniards.

Ernest believes the Negro will have his day. That all
Locked doors shatter their frames when kicked open.
Three barbed flags dive like swimmers into the bull.
All poetry should be that direct, merciless to marrow.

Tercio de Muerte: The beast sways, cattail in a zephyr.
I wonder if he can taste his ancestors’ screams in the air?
We could hollow his horns and trumpet two civil wars:
America to Spain, his sacrifice uniting our struggles.

There’s a devil in the Matador’s patience. Sword
& muleta: the cape, red, not for the bull, but to hide
The blood. Every revolution needs a martyr. Mules
Pull the carcass around the ring like Hector’s at Troy.

Ernest says muleta and mulatto were meant to sound
Alike. Both carry a man’s hard choices locked in skin.

Talking to Othello’s Reflection I

Paul’s still swollen from a London stage. When he laughs,
Thunder rolls over itself, stardust coats his dressing room.
Pen strikes paper. Heavy grace: the two words that match
His cursive. Othello, how many times must I don your cape

Before Pygmalion christens us father and son? Before
Reflection ties your flesh to mine? I’m restless: my scars,
My shields. Absent years from America broaden my song.
But I’m still hostage to my people’s needs. Jim Crow bled

Me of stars & stripes. So I raised sail. Wagered a pound
Of flesh—thirty gold coins— overseas. From London
To Moscow. What can I say: I was beautiful. Tell me,
If a man sheds his country, can that country shed him?

We’re both hemorrhaging faith. Forging our own swords.
Standing before the sphinx, stoned to our own riddles.

Men like this are molded. From need. From want. Sacred
Stuff. Sacred straw, by God. Joe’s the righteous right arm
Of Jesus-Almighty-Christ. A chicken farm and a kick-in-
The-butt. A widow’s peak and a giant can of whoop-ass.

Hem to hymn, our flag’s streaked with Russia and Reds.
Korea and rotten cabbage. China and fucking rice plates.
And Truman’s just another and. All hat and no damn
Cattle. Big, fat and smelling up the whole damn picnic.

Men like Tailgunner Joe are born, balls of their feet.
Balls in the air. Brass nuts juggled like dog balls
Under liberal noses. Answer the phone. Squint down
The line, plan a duck shoot over God’s last dirt patch.

Listen. To make a pure white omelet, you gotta break
A few eggs in Hollywood. Blacks in Harlem. Scramble
The whole lot. Square nothing with Democrats, women’s
Libbers, equal righters shitting shells in our frying pan.

Just look. He’s got the simpering sympathizers pissing
Bricks. And he hasn’t said “fucking Commie,” not once.