In This Dream Everything Remains Inside 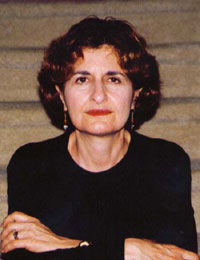 Gilda Morina Syverson, born and raised in Syracuse, New York, is from a large Italian-American family. She moved to the Charlotte, North Carolina area with her husband, Stu, in 1979 after having received an M.F.A. in Fine Arts from Southern Illinois University. She has taught at Queens University, Central Piedmont Community College and at the University of North Carolina at Charlotte. Her poems and essays have appeared in numerous literary journals and magazines, as well as in anthologies including, Hungry For Home: Stories Of Food From Across The Carolinas, (Novello Festival Press) Sweet Lemons, Writings with a Sicilian Accent, (Legas) and ON AIR: Essays from Charlotte’s NPR Station, WFAE 90.7 (Main Street Rag). Syverson’s commentaries have been aired on Charlotte’s National Public Radio station WFAE. In 2003, the Association of Italian Canadian Writers awarded her first prize in both its Poetry and Nonfiction contests.

In 2004, Syverson became a Healing Touch Practitioner through the Colorado Center For Healing Touch, Inc. She integrates concepts of energetic healing into her writing, and her drawings and paintings of angels. Her artwork has been exhibited regionally, nationally and internationally and is represented in Charlotte by Skillbeck Gallery and in Provincetown, Massachusetts by The Oz Gallery.

Dying To The Old

My brother returns my phone call
with the question, who died,
and I wonder how he knew
across thousands of miles
a part of me had succumbed
to expectations of a first generation
Italian family about making
lots of money or at least
lots of children.

Having done neither,
I gave up thinking
I was a failure. Instead
of celebrating, I worked
my way through the house,
washed clothes, scrubbed floors,
made beds, feeling like I did
as a child after returning
from drawn out wakes
and funerals where my brother
and I hid behind cars stuffed
in our grandfather’s driveway,
escaping relatives who pinched
our cheeks until it hurt.

Now on the phone, I envision
my brother, the pensive lines
of his forehead, listen to him
tell of his own longings,
even after stock market wins,
even after the birth of a son.

Nonna and Zia take a step off
the porch into the backyard,
grab chickens, snap necks dead
against their hips.

They hustle to the kitchen, plunge fowl
into boiling water, pull them out,
place them on the kitchen table, begin
talk about childhood in Linguaglossa,
while plucking feathers from dripping hens.

Nonna starts about goats raised,
Zia, tomatoes grown behind
the stone house. Both sigh
when Nonna mentions black
umbrellas carried to keep away
ash erupting from Etna, as spewed
lava smothered everything
that summer their mother died.

A Mother In My Dream

Outside the kitchen door a boy wrestles
a mother raccoon, playful, not wild.
He tucks the head of the animal under
his arm. They roll in the grass,
then play ball. He tosses,
she taps back with her paws.

From behind the screened door I call,
Be careful, she may have rabies.
He brushes me away with a wave
of his hand, walks to the corner
of the yard, grabs a shovel, peels back
skin from a rock quarry unearthing
baby raccoons. He lifts one onto
the blade’s edge, the others
begin to stir.

That’s when the mother raccoon turns
like a rabid animal, snapping
at ankles and feet, at anyone
that comes close.