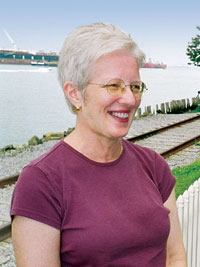 Born and raised in the greater Boston area, Ellen Wright received her undergraduate training at the New England Conservatory of Music. After moving to Brooklyn in 1975, she acquired a Masters Degree in Comparative Literature from New York University. While academic writing gave her little satisfaction, she eventually came to love the magic of generating a poem where previously there had been nothing. Recent publications containing examples of her work are Margie, Water-Stone Review and The Paterson Literary Review. She is organist and director of music at Resurrection Episcopal Church in Kew Gardens, Queens, and has taught music in several elementary schools.

and apparently out of practice at speaking
until this guy tried to dive for I.D.
until he flopped onto the ground to fish
under the bench even though we all knew

into some limbo outside our category of people
who have somewhere to go.

To the Star Above the Gowanus Canal

I know your pinhole of light has pierced the cobalt
of our low ceiling with one-shot precision.

Because Carolyn is dying as messily as possible

the spark of the radiance dammed behind your
tiny opening has singed my wishbone.

I want to renounce any claim I might once have made
to share in your brilliance. I hereby forego

the dream-tiara of cadenzas I had hoped
to wear like a princess at the opera.

An understanding heart would only serve
to increase the volume of the clutter.

Instead since wishes beg fulfillment
let me crave your boon of tuning.

Wrench me east. Twist me west.
Wind me around the sting of your beam.

Point me with your single frequency
along the way of your purpose.

stops you dead.
Bent elbow
and spangled
zeal of the

Walking Man
usher you
between the lines.
Since wrist to

tip Hand’s flare
of danger
equals the
full height of

Walking Man
his soothing
embrace is
too puny

to assuage
Hand’s panic.
His eyes are
only for

the safety zone.
How can they
co-exist
in their box

but in al-
ternating
shifts. One must
stay in while

the other
goes and works
the corner.