Murder is tough on lawyers. Especially defending it, and especially if you’re Jim O’Hara, a mid-life, mid-career, and successful trial lawyer. Jim is saddled with a defendant no other lawyer in his small town would take on. But the crime was awful and Jim is seeking desperately for something in his life that makes sense.

Homelessness is tough on single moms, especially Sophie Skribneski, a young widow with a teenage daughter to raise. After Sophie and her daughter spend their first night in an old, abandoned mortuary after being kicked out of their foreclosed home, she realizes she has very few choices.

Eventually Jim becomes Sophie’s landlord. It is all business, he would say, with, well, sure a fair amount of affection. Affection, though, that’s a tricky notion, a sieve, he might say, that can’t begin to explain the bizarre kindness Jim ultimately pays to Sophie. 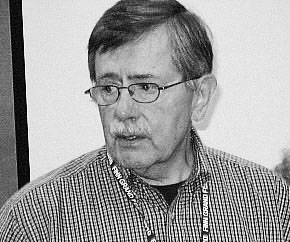 G. K. Wuori, the author of Nude In Tub and An American Outrage (ForeWord Magazine’s Book of the Year in Fiction), is an Illinois Arts Council Fellow and winner of a Pushcart Prize. He has published over a hundred short stories in such journals as The Gettysburg Review, Prairie Schooner, The Kenyon Review, Shenandoah, Eclectica, The Barcelona Review, and TriQuarterly. He is associate editor of the literary journal, Kippis, and vice-president of the Finnish North American Literature Association. He lives in DeKalb, Illinois.

Reading Wuori’s novella is like watching a master tailor sew two completely different garments – a shirt and a pair of pants – and then somehow connect them into one, a jumpsuit whose patterns belonged together the entire time. One story line: a lawyer tries to defend an indefensible murderer. Another storyline: a mother goes to extremes, signing on for medical experimentation, in order to make a home for her daughter. Wuori stitches them effortlessly together and you get a romp through relationships and marriages, love and expectations. Funny, sly, and quicksilver narration – all hallmarks of the G.K. Wuori style. –Kathie Giorgio, author of The Home For Wayward Clocks, Enlarged Hearts, and Learning To Tell (A Life) Time

With exquisitely chosen words, and chilling precision, G.K. Wuori dissects human nature to the bone. This slim novella is so full of insight, so lyrical in its examination of how we live our fragile lives, that it is bursting at its seams. Therefore, it’s a novella that is much, much bigger than most novels. –Cathie Pelletier, author of The Funeral Makers and The One-Way Bridge

Jim O’Hara, a trial attorney of local renown, sits in quiet mystery with Johnny Mondragon with only one more question to go, a difficult question because it represents stupidity piled on top of idiocy, but a question Jim has to ask.

Johnny Mondragon shot his wife, Andrea, and killed her.  He used two 9mm pistols and shot her seven times until she was dead.  Then he shot her some more.

Jim O’Hara, earlier, had sweated over Johnny’s request for counsel, his initial thoughts about Johnny’s act beginning with savage and ending with ghastly.  He stewed, he mulled, he meditated for three days.  He thought about giving the case to his friend, Stanley Cannon, then remembered more than one conversation where Stanley said he could not do murder cases anymore, that he hadn’t the nerves for it, that in his maturing years he’d begun to believe once again in innocence and felt adrift and incompetent in its absence.

Even after Jim agreed to take the case he continued to let it churn him up inside.  There was a small problem with his wife, Bridget, too, whose maiden name was Mondragon.  The family, though, had been very large with a good many laborers, mechanics, a few teachers, several nuns, and at least one priest.  Mostly, they’d occupied a large part of the agricultural acreage in the county with some of the family making money and some not.  Kids, however, they’d made a lot of those, fertility high on the list of virtues a big Catholic family cherishes.

When the case first hit the paper and Bridget saw Johnny’s name, Jim said, “Do we know him?  Have I met him before?”

There were uncles and aunts and cousins of no distinction, Bridget said, no hooks to hang a memory on, though she did remember the priest, Eli, a boy a few years older than her; fragile, she remembered, with eyes the color of Coca Cola, but of the one boy, this Johnny, “Shirttail,” was all Bridget said.  “Some of them live in old chicken coops remodeled to look like new … chicken coops?”

Jim worried, too, that Johnny Mondragon might be some kind of nut and difficult to control, to present as innocent.  The boy’s deed suggested that he didn’t like the world saying no to him.

Jim took the case, finally, as Stanley Cannon had once said about another case, “because it gets you up in the morning feeling like you just want to pound the shit out of someone – usually it’s your client.”

Jim O’Hara would find certain excuses then, certain mitigating factors in Johnny’s behavior because that was his job.  He would not find innocence although that did not bother him.  Innocence, to a trial lawyer, is about what hugging is to someone making love – nice enough but not really relevant.

The act took place on a Saturday morning well before the average person’s drinking time.  A blood/alcohol test, in fact, revealed Johnny as hard sober that day.  Too bad, Jim knew.  Nothing like a drink to take the edge off of things, particularly a charge of first degree murder.

“I wanted that marriage, what with the baby and all,” Johnny told Jim, “but Andrea she didn’t want that at all.  She moves out of the house, see, and she don’t take nothing, not even her clothes.  That’s like pissing in a thimble, sir, like saying she didn’t get nothing during our marriage so why take anything at its ending.”

That, Johnny concluded, “hurt like a sliver in your eyeball.”

To read more, order your copy of Infidelity today!