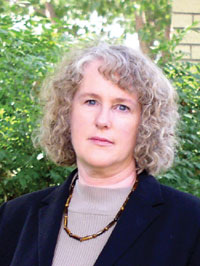 Gaynell Gavin’s poetry, fiction, and essays have appeared or are forthcoming in such places as Praire Schooner, Fourth Genre, Natural Bridge, Viet Nam War Generation Journal, The Comstock Review, Bellevue Literary Review, Quercus Review, Tulane Review, and Texas Journal of Women and the Law. Her memoir, What I Did Not Say: Reflections of an Attorney-at-Large, was a finalist for the 2003 Associated Writing Programs Award Series in Creative Nonfiction, and she was the 2001 winner of the Audre Lourde Creative Writing Award. She has lived in Illinois, Massachusetts, California, Missouri, Colorado, Michigan, and Nebraska.

I
I hardly ever lasted long:
not ringing up cheap junk all day at Wynotte’s,
legs aching behind a counter
in the shadow of Dudley Street Station;
or next with Goldie Wolfe
at Roveto of Boston,
the oldest men’s neckwear company in the city,
on an edge of the Combat Zone and Chinatown
where I did payroll
while the owner’s slut-man son
returned from lunch drunk on live porn,
offered good dope if I’d stay after work
and not tell my husband.
Goldie babbled of her favorite restaurant
with colored waiters in white jackets,
then fired me for pregnancy
as I leaned faint against a file cabinet
in the smoke and heat of her office.

II
After the muffler fell off
our white 62 Delta 88
and rolled down a brick hill,
we kept out windows open
until the car stopped running.
The streetcar didn’t come in coldest weather.
Cleaning offices at night,
I needed uniforms a size larger each month,
overheard the gossip,
She’s married to a colored boy.
Reprimanded after pausing
to check for the reassuring motion
of a foot or fist across my belly
in the eighth month, I quit.
I’d saved enough for a double bed.

This September afternoon
while I stared
out an office window
at a rain soaked parking lot,
trying to figure
how to collect child support
for a Wal-Mart clerk,
the camera of memory,
without apparent reason, snapped
a picture of you at six
with dark curls
on a tumbling mat
in gymnastics class at the YWCA
where brick walls
smelled of honeysuckle
all summer. That
was years ago, but I remember
all your smallness
grown now and gone.

Some of the Best Lawyers

in this country are jailhouse
lawyers, practicing law
eighteen hours a day
like me. I’m here,

nearly killed my wife
over another man. Can’t say
I never hit a woman before,
but only when I drank.
This time though was rage,
one thing I was really good at.

The hardest part,
growing up, wasn’t gym class.
I didn’t want to take my shirt off.
No kid wants to say, about all
those bruises, My dad did this.
The hardest part? Hearing

my sister scream. I’d plan
to kill them, then think, I
can’t, they’re my parents.
Next morning I’d see her
busted lips and black eyes.

Then the Army got me
ready for Nam. The war
ended in time to keep me
from going, but not
from going crazy.