I’ve Been Warned Not to Write About This / Ron Riekki

I’ve Been Warned Not to Write About This

This project has been canceled.
Refunds will be issued to those who pre-ordered. 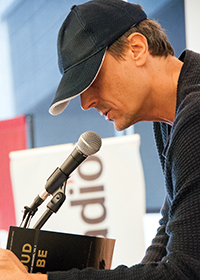 Fire burns through these poems like truth—from California, to hazmet suits, to the impeached president’s distain for science—to people like Riekki himself who work as first responders, teachers in prison, who know PTSD. This is a kind of holy book of witness—a fire ritual. The opposite of diatribe, it is an ovation to language that speaks truth. “This is not theater” Riekki tells us, “but rather our lives, my life, your life.” ~Joy Gaines-Friedler, author of Capture Theory

To “feel good enough to grace God with belief,” is to appeal to Blake’s Muse: To see bloodshed where the comfy see bullion; to know that God commissions Bible verses, not bullets, and commiserates with poets, not plutocrats. Ron Riekki is that United Statesian-Saami bard, who knows that Prez Delirium Tremens is “a David Duke of Earl,” and that a person, “killed in slow motion” equals “an adult being born.” Here’s biopsy—not autopsy. ~George Elliott Clarke, Poet Laureate of Canada, 2016-18

Read this book—not for comfort, but for truth. In poems that counter political propaganda with a powerful accumulation of guns, ghosts, and “hands. . .covered in oil,” Riekki lifts the veil of consumer culture to show us our lives of “violence as normal,” reminds us “this is not theatre.” Himself birthed in trauma, the author puts on poetry like a hazmat suit, here kneels to offer CPR to an America, pistol-shot and burning. ~Kimberly Blaeser, author of Copper Yearning, Wisconsin Poet Laureate 2015-16

The kid walks up to the fence.
He is bleeding from his leg

and arm and face and chest.
Imagine what looks like hoof-

prints of blood splattered all
over, almost comical; there’s no

need for that much blood.
I’m just off break. I’m union.

We get two breaks per shift.
I sleep in the back of my car.

It’s my time. I can do what-
ever I want for those fifteen

minutes. My hair sticks up.
He says he needs help. I go

I say, I’m an EMT. Doesn’t
that stand for medical some-

thing? I tell him I’m an EMT
for the factory. I can’t climb

no, that I have to call the cops
if he does that. I feel like an

idiot. He tries to climb but
he’s too cut up, too hurt. I

asked what happened. I see
a kid behind him, lying there.
What happened? I ask. Just

playin’ around. I’ve seen
patients with this much blood
before. We have workers

whose arms get caught in
the machinery. They get
degloved and eviscerated,

avulsions. I get them too.
A drunk employee punched
me in the cheek before,

the eye really, the cosmos
I see permanently if I close it.

I tell the kid that he’s gotta stay
on his side of the fence. I have
to stay on mine. He tells me

I’ll burn in hell. The factory
behind me pours smoke out
like it’s fighting to own the sky.

I ask where he’s bleeding
the most. He says he doesn’t
know. I say it again, angry.

to put it above his heart. He says
he can’t, it’s his leg. I tell him
to figure it out. How do you get

your leg above your heart? He lies
down. He holds his leg. The kid
in the background starts holding

his own arm. They’re controlling
the blood. I get down on the ground
and I look up at the sky too.

When I taught in prison, I told the prisoners
that if they murder someone on the page,
they can win an award, but if you murder

someone in real life, you’ll end up back
here in prison. One of the guys raised

his hand and said, What if you kill the person

who gives you the award? The class liked that.

I’d arrived by foot, but the parking lot greeted me anyway with a gala
of sun, as if the past, the onomapoetic plot!, was barbecued, ready to be
eaten, shared, trashed; I wish this hilly bliss could blizzard the vets

drowning in the intrusive flashback nets, could fix their hashed exits
with the new days of denouements, to be rescued by relief,

decluttered, as if ungunned, the agony gone, fileted;

there are times you feel good enough to grace God with belief.

When newspapers died,
their son
took over
the business
and he liked boobs,
so he’d write
obituaries
about boobs
and show boobs playing
golf
and he made the weather report
a boob weather report.

The boobs
appreciated the fame.

In the old days,
boobs couldn’t be
involved in politics,
but now boobs
run for President
every year.