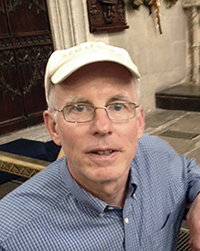 Charles Rammelkamp is Prose Editor for BrickHouse Books in Baltimore, where he lives. He is the author of several previous collections of “historical” poetry sequences, including Fusen Bakudan (Time Being Books), about World War Two Japanese balloon bombs and leper colony missionaries in Vietnam; Mata Hari: Eye of the Day (Apprentice House), about the life and career of the World War I femme fatale spy; and American Zeitgeist (Apprentice House), which deals with the populist politician and Scopes Trial buffoon, William Jennings Bryan. He has also published a novel, The Secretkeepers (Red Hen Press) and several collections of short fiction, including A Better Tomorrow (PublishAmerica) and Castleman in the Academy (March Street Press).

I love to read volumes of good poetry telling fascinating stories with new facts from history. Charles Rammelkamp’s JACK TAR’S LADY PARTS fulfills all of my wishes. I had no idea so many women went to sea as wives, tarts or disguised as men, misfits in the world of women on land. Though against regulations, these women come to us in this fine series of narrative and persona poems to offer us a delightful voyage! ~Carol Hamilton, Former Poet Laureate of Oklahoma

In this wonderful collection, Charles Rammelkamp is both a poet and a historian. His monologues help us to rethink gender and gain empathy for those who do not fit in with the traditional roles of their time. With such lively voices, it feels like his characters are right in the room with us as we read. ~Kenneth Pobo, author of Loplop in a Red City and Trina And The Sky

In JACK TAR’S LADY PARTS, Charles Rammelkamp takes us to sea. Through the portholes of his colorful poems, we glimpse the lives of women (often disguised) on British ships of the 18th and 19th centuries. With the intriguing section titles of Wives, Prostitutes and Transvestites, we become privy to the triumphs, tribulations and tragedies of these females of another era. How brave, these early Wonder Women! Rammelkamp treats them with awe, humor, always with respect. ~Shirley J. Brewer, author of A Little Breast Music, After Words, and Bistro in Another Realm

They called us Jack Tars,
the seamen of the British Empire:
Royal Navy or Merchant, either one.
We tarred our clothes before going to sea
to waterproof them; tarpaulin as well.

We also soaked the ships rigging with tar,
so the hemp wouldn’t rot in all that wetness.
Seems like we were always doing it,
soaking the ropes and cables of the standing rig
on our old wooden ships,
like looking after pets or caring for farm animals.

Since it was hard for us to cut our hair,
we wore it long, in a ponytail,
smeared it with high-grade tar
as if slathering jam on bread,
so the hair wouldn’t get caught in all that equipment
on all the frigates and the dreadnoughts and caledonias
and three-deckers and what-not,
the ship’s chandler sometimes like a miser
handing out the rosin, the pitch, the turpentine and tar.

Some took Jack Tar as an insult,
a hoity-toity stick-up-your-nose term,
but me, I was proud to be called Jack Tar,
Royal Tars of Old England.
God Save the King.
Must have been over forty thousand sailors,
most of them Jacks but some of them Jills.

A Captain is not to carry any woman to sea…without orders from the Admiralty. – Regulations and Instructions Relating to His Majesty’s Service at Sea (1731)

Despite Admiral Jervis’ obsession with women
squandering the drinking water onboard our ships,
Rear Admiral Nelson’s vow to rid the fleet
“of all the women, dogs and pigeons,”
they both loved “ladies of quality”
traveling in the officers’ quarters.

We rescued the Wynnes, a prominent family in English society,
and their four comely daughters
after they’d been evacuated from Leghorn in 1796,
ahead of the arrival of la petit Caporal’s army.
They spent the next few months with us on the Theseus,
Jervis showing a special fondness for Betsey and Jenny –
“the Admirables,” he nicknamed those teenagers –
entertaining them to a round
of dinner parties and dances,
even encouraging Betsey’s engagement to Captain Fremantle,
commander of a ship in Nelson’s squadron.

And Nelson? When he took Lord and Lady Hamilton on a cruise
from Palermo to Syracuse and Malta and back
aboard the Foudroyant, the spring of 1801,
nine months later their daughter Emma gave birth
to Nelson’s little girl, Horatia.

I’d already spent five years as a marine,
sailing to the West Indies, Tahiti, India,
taken as able by me mates,
but when that press gang picked me up
walking along the streets of Plymouth
dressed in my man’s clothing,
then tossed me into a stinking cell
in a crimping shop on the waterfront
to await a ship’s assignment,
rats scurrying over my hands and feet,
brushing my face, hardly any light,
I started to panic,
feeling closed-in on all sides,
and I told them I was a lady,
Hannah O’Shaughnessy, from Ireland.

They still didn’t believe me,
or at least claimed they didn’t,
and I pulled down me breeches,
like I expect they were waiting for me to do,
showed them my minge.

I prefer being a man,
but when I saw my liberty was at stake,
I figured it was my only way out,
like a trump card in a game of skat below decks.