An Advance Sale Discount price of $9 (+ shipping) is available HERE prior to press time. This price is not available anywhere else or by check. The check price is $13/book (which includes shipping) and should be sent to: Main Street Rag, PO BOX 690100, Charlotte, NC 28227-7001. 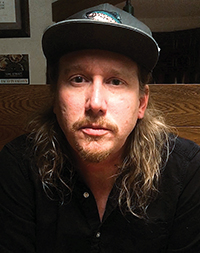 Wilson Koewing is a writer from South Carolina. He is a graduate of The Creative Writing Workshop at The University of New Orleans where he received an MFA in screenwriting. His work has appeared in Gargoyle Magazine, Pembroke Magazine, Wigleaf, and New World Writing. He lives in Asheville, North Carolina with his partner, Sarah and his dog, Odie. They are expecting their first child, a daughter, Freya.

Reading Jaded feels like you’re peeking through a keyhole, or reading someone else’s texts. A car crash of a flash collection that you cannot turn away from. Koewing’s prose is urgent, abrasive, and sexy; his characters naked, vulnerable, and devastating. It is a must read of contemporary literary fiction.  ~Meagan Lucas, author of Songbirds and Stray Dogs

By turns tender and brutal, these stories consume the world the way we all do now—in short and brilliant bursts. Jaded takes us from the kitchens of the French Quarter to the heights of Denver’s construction cranes. This is fiction steeped in place and Koewing is a willing tour guide. No stranger to a Sazerac, he’s too good at making you stay for just one more.  ~Greg Tebbano, finalist for the First Pages Prize and the Robert C. Jones Prize for Short Prose

I learned of Josh’s suicide from a comment on someone else’s post. Shane and I were in bed watching that Hitchcock film with no cuts.

“My ex killed himself.”

I went outside before he could respond and called Dignan, the mutual friend I still had with Josh.

“You know this was months ago.”

“You haven’t changed, have you?”

I started to hang up.

When I returned to bed Shane was jealous. I got it. Nothing had excited me as much as Josh killing himself in ages.

After Shane fell asleep, I scrolled Josh’s Facebook until I found a photo outside the dorms at The University of New Orleans. The first time I’d seen snow. Josh stood in the background laughing as I made a pathetic snowman.

In the end, Josh drove away from the levee-side bowl by Lake Pontchartrain where UNO housing waited to flood. His gold Civic rose up the bowl’s side, slid along the edge and dipped out of view.

I found his number still in my contacts. His final message bled across the screen: I know I’m the reason for this ending, but I hope we meet again.

I typed I’m sorry and sent the text.

Shane kept at it when we woke up mid-afternoon.

“Why not microwave those,” he said, watching me put frozen waffles in the oven. “It takes forever that way.”

“Why don’t you stop being jealous of a dead guy?”

My phone vibrated on the counter.

“Probably your dead ex I’m jealous of,” he scoffed.

I nearly fainted. It was a text from Josh’s number: How are you?

I walked down Esplanade to the edge of the French Quarter, bought a to-go whiskey and sat on a bench in the neutral ground.

Josh? I texted. How is this possible?

How is anything possible?

I downed the whiskey in a gulp and walked down Chartres until I reached the Chart Room. I ordered a Sazerac and stood outside. If I planned to consort with ghosts, the Quarter seemed a fitting arena. My phone rang.

“Where did you go?” Shane said.

“That’s what I’m trying to figure out.”

As I hung up, a Facebook notification appeared from five years earlier. A photo of David Cerny’s “Man Hanging Out” sculpture taken the day Josh and I met while studying abroad in Prague. I was smoking outside the hostel when he wandered up and asked me to get a drink. I hadn’t yet unpacked. We were jet-lagged and delirious. I told him to give me an hour.

He sat outside of the pub below the sculpture wearing a fedora and drinking a beer. The late afternoon sun painted long shadows across the walls that lined Old Town’s cobblestone streets. I didn’t realize it was him until I got closer, and the sun dipped behind the building.

“Only if you throw that hat away,” I said.

He’d just purchased it in Wenceslas Square, but frisbee tossed it into the street no questions asked.

He was smooth. I liked him immediately. And the beer was strong.
A whirlwind evening ended at the Prague Metronome above the city. Once a monument to Stalin under communist rule, now a haven for skateboarders or a secluded spot for clandestine lovers to watch the Vltava snake through Prague.

Hidden by an alcove of trees we had sex while the metronome’s methodical click thumped against thick summer air.

The text from Josh’s number read: We should meet.

I downed half the Sazerac. A guy in a Saints jersey smoked on the corner. I bummed one even though I’d long since quit.

“What are you getting into tonight?” he asked, lighting my smoke.

His eyes widened and he turned away.

Meet where? I responded.

I’ll be there in fifteen.

I killed the drink and left.

I hadn’t thought much about Josh in years, but I took comfort in knowing he was out there. That’s the thing with exes, unless criminally horrible, it’s nice to remember they lurk. If what you had could be that good, who’s to say it couldn’t someday be again?

A guy wearing a fedora sat outside drinking a pint. As I neared, his features took on the shape of Josh’s in the crumbling dusk light. A lump grew in my throat that caused my feet to cement on the ancient street. He took a sip and turned to face me. The facade of it being Josh dissolved into the evening’s ether.

I could tell he was who I’d been texting with; a strange eagerness hid behind his gaze. Glancing away, I passed close enough to touch him and crossed the street. Blocks away, I slid to the ground against the wall of the St. Louis Cathedral to breathe.

A text from Josh’s number read: Was that you?

I stared out into Jackson Square at the palm readers and Tarot ladies. One Tarot lady, her face white in a candle’s glow, stared back like she saw a ghost.

I left, feeling her eyes as I went. A tugboat horn sounded on the Mississippi. I imagined Shane angrily pacing outside The Chart Room.
I texted Josh’s number: No, it wasn’t me? I got held up.

Night had fallen when I wasn’t watching. In the distance, the skyscrapers of the Central Business District jutted in stark contrast to the Spanish buildings of the Quarter, a perfect blend of old and new. Flickering light from gas lanterns lit Royal Street as I walked back toward The Chart Room to find Shane.

If you’d like to read the rest of this book, please order JADED today
at the Advance Discount price and have it delivered to your door
when it is released in the Spring of 2023.