poems of the road 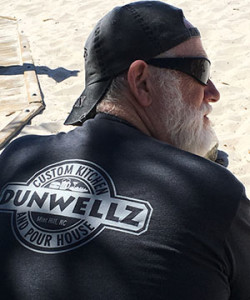 M. Scott Douglass is publisher, managing editor, and book designer at Main Street Rag Publishing Company which he helped found in 1996. He grew up in Pittsburgh, attended Penn State-Behrend (Erie, PA) and has a graphic arts degree from Central Piedmont Community College in Charlotte. His poetry has appeared in such places as Ashville Poetry Review, Gargoyle, Iodine Poetry Journal, Midwest Review, North American Review, Plainsongs, Poetrybay.com, Redheadded Stepchild, San Pedro River Review, Slipstream, Tar River Review, The Southeast Review (Sundog), Southern Poetry Review, and Wild Goose Review (among others). He’s been a Pushcart Prize nominee and the recipient of a 2001 NC Arts & Science Council Emerging Artist Grant which was used to publish his first full-length poetry collection, Auditioning for Heaven (an honorable mention for the 2001 Brockman Campbell Award). In 2010, the Poetry Council of North Carolina dedicated its annual, Bay Leaves, to M. Scott Douglass for his support of poets and poetry in the state of North Carolina. His cover designs have garnered two PICA Awards and a 2010 Eric Hoffer Award nomination for graphic design.

Off the field (so to speak), he’s been a dental technician, a construction/demolition worker, a bookstore owner, baseball and basketball coach. He bred rats for the University of Pittsburgh’s Pathology Department and even wrestled a lion once. Yes, a real lion.

All he wants is lane space, wheels
to carry him, fuel to burn, and time.
Everything else is scenery or obstacle.

So concludes Scott Douglass’s evocative poem “Highway Man,” only one of many beautifully crafted, thought-provoking pieces in this new collection. Reading Douglass’s JUST PASSING THROUGH is like reading a picaresque lyric-novella. The title itself sets us in the mode of travel then embarks us upon a road trip both literal and metaphorical of life’s long, varied, and instructive journey. A lovely, lovely accomplishment! —Cathy Smith Bowers

M. Scott Douglass’ JUST PASSING THROUGH  bristles with direct, honest, often humorous tales of the road. A sharp observer of human behavior—on motorcycles and in cars, in rest stops and motels, at red lights and roadsides—he doesn’t miss a thing. Reading these poems, I feel like he’s nudging me in the ribs, and pointing, saying, “Get a load of that,” and I’m happily following his gaze, trusting him not to know where we’re going. —Jim Daniels

Scott Douglass’s fine new book of poems, JUST PASSING THROUGH, takes to the highway with verve and thrum and claims that terrain—as well as the volatile back lanes of the heart—as the province of yearning. His language ignites and pounds like pistons. But the landscapes he roars by stay with us as he marks each signpost with poems that “reveal a sacred / path to another wayward spirit.” This book establishes him as a bard of the open road, “passing through the walls of lives / with no fixed destination, / but a tireless need to say / [he’s] been somewhere.” That somewhere is here, this interstice in time, this whistle stop, we all occupy and flail away at making sense of. These are deep, contemplative poems—Scott Douglass at the top of his game. —Joseph Bathanti

She Won’t Drive with You
Through Kansas or Nebraska

These are only two of many
places she’d rather fly over.

You counter with a debate of corn
versus wheat versus soy,

of drought versus drowning,
healthy versus sick,

of sunflowers waving
in fading light, the golden glow

of morning dew in late summer,
air kissed with a hint of must.

You remind her of a blue rowboat
beached amid Nebraska grasslands

of fleeing funnel clouds springing
up and down over distant prairie,

the fluorescent green innuendo
of terraced Iowa fields in spring.

This treasury of accidents
you witnessed together, lost

or smeared on muddy canvas
from thirty thousand feet.

He sees himself as a road warrior,
not a Mad Max post-apocalyptic mercenary type,
but someone who drives angry,
drives with a vengeance,
drives determined to arrive on time.
He wants a road to call his own,
free from the scourge of soccer mom
mini-vans drifting in and out of lanes
between cell phone calls, free
from overcautious octogenarians
in thirty-year-old Le Sabres, free
from truckers side-by-side, holding hands
and skipping uphill as they haul oversized loads;
free from entitlement Caddys and crotch rockets
that slash across multiple lanes like rash
hummingbirds, disrupting the bubble
of space he clears for himself against
an erratic shamble of traffic.
It’s all very simple to him:
drive it or park it, but stay
the hell out of his way.
There is Point A and Point B
and no point obstructing the distance between,
no point debating right-of-way or speed.
All he wants is room to ride, wheels
to carry him, fuel to burn, and time.
Everything else is scenery or obstacle.

You roll out early, hoping to beat
rush hour traffic. The rear windows
of vehicles you pass reflect pink
and purple layers of sunrise.
At a bottleneck, a family van driver
in the adjacent lane gazes at luggage
strapped to the passenger seat of your
motorcycle. You hear her heart wonder
if this is freedom and how it feels.

In this fantasy, you answer:
Come. Ride with me. Feel rain
and sand sting your cheeks
at seventy miles an hour, taste
tire dust and sprayed blood
from suicidal insects, savor
the many flavors of road rot,
decay, death; show me your body
can handle ten hours in the saddle
then we’ll talk about freedom,
we’ll talk about a love so strong
it aches for more aches.

The highway splits as the sun breaches
low-hanging clouds, warms your back.
A halo appears in front of you,
around a shadow of your head: light
refracting through your windshield,
illuminating the road itself, as if
to highlight a passage in the book
of the open road, reveal a sacred
path to another wayward spirit.

Every rest stop tries
to red-arrow you into place
on a piece of paper framed
behind glass to protect it
from bleary-eyed graffiti
and wayward steerage.

You remember going off-
road to stretch your legs, test
the local cuisine. Your waitress
migrated from Austin, bright
eyes, pretty smile, she forgot
you soon after your tip met
the bottom of her apron.

Your map is a jumble of rusty
road signs, scarred vehicles,
blurred landscapes, faces
in silhouette. You’re a ghost
passing through the walls of lives
with no fixed destination,
but a tireless need to say
you’ve been somewhere.