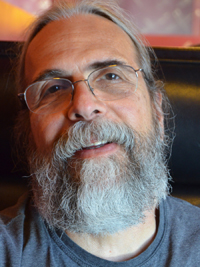 Jonathan K. Rice earned his B.A. from the University of North Carolina at Charlotte and did graduate work at Erskine Theological Seminary and Gordon-Conwell Theological Seminary-Charlotte. He is founding editor and publisher of Iodine Poetry Journal. He is the author of a chapbook, Shooting Pool With A Cellist (Main Street Rag, 2003) and a full-length collection, Ukulele and Other Poems (Main Street Rag, 2006). His poetry has appeared in many publications and he has been a longtime host of poetry readings in Charlotte, North Carolina, where he lives with his family. In 2012 he received the Irene Blair Honeycutt Legacy Award for outstanding service in support of local and regional writers, awarded by Central Piedmont Community College. He is also a visual artist. His work has been featured as cover art on books and has appeared in the online magazines The Pedestal, Referential Magazine, Red Headed Stepchild, Levure Litteraire, The Inflectionist Review and Empty Mirror. He was also a featured artist in Apogee Magazine, the literary arts magazine of High Point University.

Time is, indeed, the unifying metaphor in Jonathan Rice’s delightful collection Killing Time. But Rice, himself, is not just killing time—he is shining a light of gratitude on every ostensibly minute thing within the range of his witness. Rice gives us a new way of thinking of pennies in a urinal, the rattle of filament in a burnt-out light bulb, the grace of thirty-dollar co-pays, a broken bottle of cabernet sauvignon, slugs and heat lightning and cardboard drums. Each is a small blessing this poet gives thanks for, then, in language that sings, passes on to his fortunate readers. –Cathy Smith Bowers, former North Carolina Poet Laureate (2010-2012) and author of Like Shining from Shook Foil and The Collected Poems of Cathy Smith Bowers.

Jonathan Rice’s poems, in his new volume, “Killing Time,” quietly, almost imperceptibly, compile a litany of the world, in all its incarnations, coming to life before our very eyes. These fine poems laser in on the daily offices of those we habitually pass on the street without noticing. Rice, however, is attuned to the nuance of every moment in which he finds himself inevitably immersed. “Every night / the same lamp / disappears / in the dark,” laments the speaker in “Solipsist Meltdown.” Yet, come morning – through the work these poems do to keep us all breathing and burnished – the light appears anew. I love the humanity of these poems, their contemplative reverence for the least of them – in all their misunderstood turmoil and twisted glory. –Joseph Bathanti, former North Carolina Poet Laureate (2012-2014) and author of Half of What I Say Is Meaningless and The Life of the World to Come: A Novel.

Despite what the title of Jonathan K. Rice’s new book of poems might suggest, you will not be “Killing Time” when you read these pages. Rather, you will be taken into a world of seemingly ordinary objects, events, and people rendered extraordinary through the poet’s sharp, unstinting vision. With Rice’s wry voice to guide you, you’ll enter auto shops, topless bars, tattoo parlors, cafes, and pawn shops, even a men’s restroom where three Lincoln pennies, trapped in a urinal, offer up imaginative possibilities. There are love poems here, too, poems of longing and desire and loss, and portraits of men and women who wish only to stop time, a wish this poet grants, page after page, for his lucky readers. –Rebecca McClanahan, author of Deep Light: New and Selected Poems and Word Painting: The Fine Art of Writing Descriptively

Rivulets of dirty water
flow down the sloping trail

through the woods where I’m
caught in a downpour with my dog.

The creek begins to rise,
gets louder as we get wetter

and I feel like a sponge,
becoming heavier as I walk.

My dog lays down her ears,
water dripping from her jowls.

We make it to the trailhead,
my car in sight where it lies

beyond a meadow turned marsh.
The coffee in the travel mug

might still be hot. It will be
warm and dry inside my car.

I have plenty of towels in the backseat.
Too bad that’s where I left my hat.

She sat at the kitchen table
late in the morning
as the sun angled
across the iron étagère.

Fruit in a bowl were beginning
to overripe. An African violet
bloomed in a small ceramic
pot by the window.

A smooth cotton towel
laid before her as she planned
to embroider black hearts
across the grain of fabric.

She slipped on the brass thimble
traced the broken lifeline
in her palm as she unspooled
soot black thread, took the needle,

and worked them together
to bring an image of permanence,
a sense of meaning through the
impermanence of the morning.

Young man at the curb
by the grocery store
squats to play a cardboard box,

taps out rhythms
with his nimble hands
hopes for spare change,
maybe a dollar or two.

His audience slows down
for the traffic light.
A driver waves a buck.

He darts between cars,
grabs his money,
thanks the man loudly
and returns to his spot.

There is praise in his voice,
promise in his cadence,
the beat of his cardboard drum.