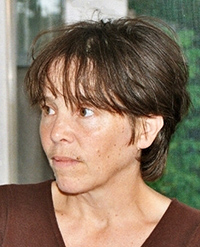 Kate Gleason’s Laika in Space showcases the broad range of this poet’s remarkable lyric voice, by turns witty, vernacular, scientific, rueful, restrained, and tender. The poems braid together passages focused on science with stanzas on history, art, myth, and biography—weaving together connections and echoes so that what is human and what is nonhuman, the stuff of the universe, are clearly made of the same cloth. The poet brings the same empathetic but unflinching gaze to her own mortality, and the mortality of those she loves. ~Martha Carlson-Bradley, author of Begin with Trouble and Sea Called Fruitfulness

Kate Gleason’s imagination makes brilliant, witty connections: from Darwin’s voyages to gun violence in our schools, from Laika the Russian dog to her father’s deathbed and her life as a daughter, a teacher, a woman in this century. There is scientific curiosity in these poems, keenness of intellect and a passion for knowing. Her poems are a thrill to read: breathless in pace, full of compassion, entertaining yet deeply moving. ~Deborah Brown, author of Walking the Dog’s Shadow (winner of the A. Poulin Jr. Award at BOA) and The Human Half (American Poets Series at BOA)

Why We Use Daisies to Mourn School Shootings

You can always count on a daisy
to suffer its petals falling out
or being picked off
to find the answer to love
is often loss.
With their blossoms just beginning
to wilt, their faces still bright
above leggy stems,
they’re easy to slip into the thousands
of diamond-shaped mouths
in a chain-link fence
above a sea of flickering votives
and photos of the dead.
Like the yellow hubs of daisies,
our centers feel too porous,
a sponge that grief needs
to nightly wring out.
Oh, how these blooms nod
over the snapshots of the lost:
boys with Nike Airs
and backward baseball caps,
who will now never unfold
their jack-knife lives.
Or girls with the still-round faces
of imoji’s, and Hello Kitty
cell phones in hand, posing
for what will come to be
their last selfie on Facebook
or Instagram. Daisies now
watch over them,
and the loved-ones they left behind
try not to get too riled
when talks over gun laws stall,
a new bill killed on the Senate floor,
all so some Texan
can sling his power around
his hips and swagger down the street.
And the parents of the dead?
Don’t they have the right not to carry
this unbearable grief, this ache
that won’t ease, no matter
how many moons may pass,
each a round that’s emptied
into the body of the night.

Possible Models of the Cosmos

We used to think music
came from the turning
of celestial spheres
nested in a system
that placed us at the center
where we were certain
we belonged.
The orbits of other bodies
made haloes around us,
a harmony
as our armillary spun,
ringing like clinked crystal
or the humming lip
of a hollow goblet
from which God’s finger
pulled a song.

Where we stood
in the scale of things,
we had no idea till Galileo
showed us with his new lens
how we, not the cosmos,
revolved: a tiny dot
circling the sun.
Or not even circling,
our orbit elliptical
and simple as an egg
or a plain oval brooch
of faceted jet,
no gaudy baubles
of epicycles needed
to ornament the deferent
or explain, so often,
why Mars was in retrograde.

Everything changed.
How could we deny it?
There, before our eyes,
a new star in the firmament
that was said to be fixed.
And our blemished moon
closer now than ever
where someday men would walk.

The clock springs
of spiral galaxies
keep winding up the universe
so tightly
it will never run down,
and the motions of bodies
are accurate to within
one arc-second of where
they were predicted to be.
A few underlying constants
grease the wheels,
the pieces that are less than
the sum of their parts,
the whole broken, reduced.
Even the moon’s a nickel
that our planet flips
into the dark slot
of the night’s
mechanical bank.

Suddenly space
becomes also time,
a grid of lines like city streets,
but curvilinear, a net
we all fall through together
but at seemingly different rates,
depending on the speed
of the observer.
Each perspective is equally true,
the way we’re both ourselves
and the child we used to be,
like the twins
in Einstein’s paradox:
In the mirror now,
we see the one left behind,
not the boy on the rocket
who escaped the earth’s pull
and for whom
only a moment has passed,
but the man with the body
that isn’t as quick,
time moving faster
the slower he goes.

The Big Bang made everything
bloom from nothing,
made time and space all at once
flare out and widen
like the fluted mouth
of a trumpet vine blossom,
that long alembic
where time travels now
in one direction
and carries us with it
out of the flower’s dark throat
filled with sweetness
and dying.

It’s hard to say just what
exactly happened
in the fractions of a second
after the Big Bang,
but the thinking now goes
that we branched off
from the singularity
into zillions
of bubble universes,
each with its own laws
of physics. In this one,
we live on the surface
of a three-dimensional
membrane, or brane,
that according to String Theory,
has six more dimensions
hidden inside it somehow,
able to fold themselves up
at non-Euclidean angles,
more compact
than a microchip.

Otherwise, nothing
has essentially changed.
We still feel
as lonely as the next guy,
our bubble a tiny speck
in the ocean
of cosmic froth,
where death, as always,
foams at the mouth.
We still try, as we walk into it,
to whistle against the dark
or hum under our breath
a little song,
if you can even call it that.

Hansel and Gretel knew: You never get over
being a Lost Child, the one who makes herself invisible,

forest. Later, whenever love throws a few breadcrumbs,
you mistake them for a trail that leads to home.

But being lost is what feels like home to you,
your sense of direction skewed,

like a polar explorer whose compass always points
to a cold, drifting waste of emptiness,

the needle obedient to the North,
helpless against its magnetic pull.

childhood’s black box still emitting its signal
from the old reptilian sector of the brain, where fear’s yellow

almond-shaped eye nightly lowers its transparent second lid,
keeping watch even as it sleeps: your extremities

suddenly flooded with blood, your heart clanging its clapperless bell,
everything so real it’s dreamlike. Why don’t we call it

fight and flight, my running away as a girl a weapon
I deployed but hoped that someone would decode my message

like the lines I once cut into my arms, trying to let something
from the inside out, a row of x’s: a word written under erasure.

I’ve roped off some of my childhood memories
like a crime scene: the men who left

their invisible fingerprints on me, saying
“Can’t you take a joke? It didn’t mean anything

personal.” Like seeing a movie with no soundtrack,
I watched my life from a good distance

above the earth. Houston, we have lift-off.
I can still feel something in me

escape upwards like heat,
and — voila — my body is there

and not there all at once
the way a fish can hide in stillness.

I’m right back in that body whose only safety was when
it grew light enough to fit into a high, thin place

where the touches that men meant nothing by
could penetrate.

Before closing the hatch, they kissed her face and wished her
Bon Voyage, knowing she wouldn’t survive the flight.

During takeoff, her pulse tripled and never calmed down,
even later, when floating weightless was soothing for a while.

Her handlers used to comfort her after a centrifuge ride
made a carnival of her vital signs.

Without that now, her heart couldn’t return to its normal rate.
Mere hours into her orbit, the insulation failed,

and her cabin temperature climbed. She died from panic
and overheating, all the while waiting for her master’s voice

to call her back in from the diaspora of stars,
all those scattered points of light

a trail of bread crumbs that led nowhere
close to home.

5. Decades after Her Death Was Covered Up,
Laika Gets a Memorial Statue

Maybe cold comfort
is the most we can ask, a brass plaque

embossed with her name, Laika,
meaning “barker,” one who has a voice.

Maybe it’s enough that the real story
eventually came out, like shrapnel

that slowly works itself to the surface
of the skin. At least now

she can finally be laid to rest
and at last properly grieved.

At least now, we can remember her like this,
with the ground again under her feet.