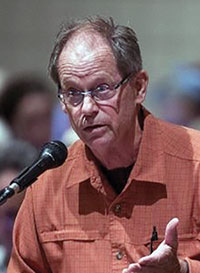 William Jackson Blackley, MD was drafted in 1966, served four active duty years in the US Army, completed two tours in Vietnam, and was awarded four Bronze Stars, four Army Commendation metals and two V Devices for valor during combat. He served as the Executive Officer of a 155-mm self-propelled artillery battery and volunteered for a second tour to lead a Civil Affairs Platoon that worked to help the Vietnamese civilian population improve their lives. Bill has been the President of the NC Poetry Society and is the co-founder and Chairman of the Gilbert-Chappell Distinguished Poet Series. He enjoys reading poetry and works hard to capture reality in his personal writings and credits poetry with helping him overcome dyslexia.

Bill Blackley’s debut collection, Lingering Fire, is aptly named. The fire that burns throughout these incendiary poems is fed by the caustic memory of war—though Blackley, at every turn, sifts through language for the antidote to violence. But, ultimately, like any good poet, he settles for the often awful truth that abides in the unforgettable images seared into his consciousness—the sheer ordnance of them —meticulously catalogued in this reluctant soldier’s psyche. Such brave and luminous poems.  — Joseph Bathanti

The poems in this collection reveal how even when war has ended, the war is not over. Images return to haunt—those of the ones you couldn’t save: “Bobby’s . . . fixed charred lips, whispering, / Lieutenant, Do you think I’m gonna make it?” Isn’t this the question everyone asks in war? Soldiers are taught to show no sympathy for the enemy, but that’s not what we find here. Among other unshakable images, Blackley has witnessed a Viet Cong soldier’s “. . . rope-dragged, / head bouncing on the road . . . .” It takes immense courage to write such poems, and Blackley is as courageous in his writing as he was in Vietnam. There are moments of tenderness and great insight. And you, dear reader, will be utterly changed. — Gail Peck

As a southern boy I iconized spit
shine, square shoulders, brocade
eagles and Lugared holsters. I idolized
trouser-creased soldiers in overseas
caps, John Phillip Souza, parades, BB
guns, battle stars, crossed bars and Rebs
who mustered in with Lee, Jackson,
Longstreet, and Early. I believed Pickett
to be a hero charging Cemetery Ridge where
my great granddaddy quick stepped
onto the Confederate Role of Honor. Such
was my glorious notion of war until
pinned in a kill zone in Vietnam where,
blackening my silver bars against snipers,
I fired an M-16 through a bunker slit.

How willingly fresh recruits step
from civvies and shoes, to fatigues and boots,
don helmets, web gear and flak jackets,
thinking, they’ve got the risks covered.

Wouldn’t it be cool if kids could leave
battle gear hanging on the rack, could
rollick through spring campaigns, boys
in blue shorts and, girls in yellow jumpers.

At age ten, I hipshot, with a BB gun
a sparrow from a tree, then cried
over its limp body. In the tenth grade,
a bully punched my friend’s head
against a brick wall. I nearly vomited.

In Vietnam, I gathered burnt men
and lay them in a row, watched
a man feet-tied and rope-dragged,
head bouncing on the road,
fist-sized potholes in his chest,
yet, did not protest when an American
safety-pinned a unit patch to his bare skin
as revenge for an ambush.

A klick away we laid out 155-mm guns
in a lazy W, and waited. An aerial observer
spotted six VC on bikes in the open
and radioed in a fire mission. We ordered
gun # 3 to bracket and then called in six guns

for effect. Without a twinge of remorse,
we landed six artillery shells dead center.
A reconnaissance team brought in a single
mangled bike that we nailed over the mess
hall door, and then we paraded in for supper.