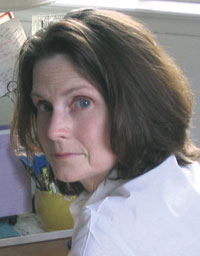 Kat Meads is the author of The Invented Life of Kitty Duncan, Sleep, Born Southern and Restless, Not Waving and other books of fiction, nonfiction and poetry. She has received a National Endowment for the Arts fellowship, a California Artist Fellowship, two Silicon Valley Artist grants and artist residencies at the Fine Arts Work Center in Provincetown, Yaddo and Millay Colony. She also received the Chelsea award for fiction and the New Letters award for essay. Her short plays have been produced in New York and Los Angeles.

Life frequently goes from bad to worse in Kat Meads’ collection of Flash Fiction–the literary equivalent of that children’s ditty “Great green gobs of greasy grimy gopher guts.” And whether she’s addressing boomerang offspring, pity visitations, dead pets, the Emilys (Dickinson and Bronte), or crabgrass, her ears and eyes are trained on language like a linguistic sniper, waiting patiently as words billow and bloom in a kaleidoscopic oil spill of color. In Meads’ fragmented world, rage, frustration, failure, and disappointment are nothing compared to aunts who throw big fat snakes at greedy nephews. And you, dear reader, will cheer these disconnected, discombobulated, misfiring somebodies on to Pyrrhic victory.

Instead of words back here by ink-stained blurbistes and blurbettes, why not let’s cut the cackle and mark books with hobo symbols instead? If we did, I’d have to mark these evil and hilarious tales with ö ? (beware tiny pyramids), /// (not a safe place), “” (expect a blur or two), (watch out for black holes) and Ø? (zero boredom).

–Robert Gregory, Author of The Beautiful City of Weeds

In edgy slices of dark humor and outright raw revelation, Kat Meads serves up stories populated by folks of all emotional shapes and disturbances.

–Suzanne Hudson, Author of In the Dark of the Moon

Hers was a big, sprawling family of wiggy folk: dad Robert, mother Francesca, brother Seth, Aunt Bet, Uncle Don, Nanny Lou, four quarter horses, several sheep and too many other relatives and animals to list without fatigue. The earliest and most profoundly influential residence of Jacqueline (Jakie) Shell looked and was a by-gone-glories Colonial with faded floral wallpaper, leaky wing porches and chimneys clogged with starling nests, surrounded on all sides by a goat-nibbled yard and maple trees split by lightning strikes. Jakie Shell loved and lost two dogs, both, she was told, run over, though not contemporaneously, by a speeding grain truck while she slept. Alphonse and Arrowhead met their ends a year apart. In each case, following a suitable period of mourning, Jakie dug a hole in the squishy dirt near the septic tank and dropped her pet in. Brother Seth conducted the formal services, dressed, out of respect, in the only costume his closet provided: a Boy Scout uniform. After each funeral, Jakie sneaked off to the local store for a bag of penny candy to assuage her grief. On the second occasion, another customer, a stranger with hairy hands, pulled her aside to relate a long involved story about dead Granddaddy Shell: a “notorious, lyin’, cheatin’ bootlegger” who “covered the whole damn swamp with whiskey stills,” her informant said. Listening closely, Jakie swallowed several chocolate balls whole.

At dinner that evening she faithfully repeated the slurs word for word. Seth grinned foolishly; Francesca paled. Among more creatively obscene oaths, Robert shouted: “It’s a damn lie!” With exaggerated ceremony Nanny Lou spread her black lace fan, flapped it, mussed her curls and crooned: “What if he did? What if he did?” When Jakie asked Aunt Bet, the most forthright of the dissembling Shells, if all her relatives were odd, Bet began the evaluations with Francesca. “Let’s put it this way,” she said. “Your mother managed all right at first with my brother’s gambling, even with his women, but she’s not as constitutionally strong as she should have been to marry into the Shells. I said as much at the wedding. Back then she was charmed by his recklessness. But you see how it’s played.”

Mostly Jakie saw evidence of her father’s no-advance-warning moods. By turns maudlin, abusive, apologetic and weepy, he grabbed his children, pawed their heads, called them his “precious ones” and bound them, squirming, to his bony chest. An avid hunter, he owned a stockpile of guns. The night he decided to hold one to his wife’s head, he had a healthy arsenal to chose from. When Francesca screamed, Jakie and Seth raced to the landing in their pajamas. One of their father’s hands twisted their mother’s hair; the other pressed the gun barrel against her temple. Regardless, Francesca worked hard to stomp out the burning cigarette dropped by Robert to free his shooting hand. “You’ll fry us!” she screeched, scarlet with rage. On the landing, Jakie elbowed Seth. “Why does she care? Won’t she be dead by then?” Infuriated by the distraction, Seth cuffed her hard across the mouth. Out of nowhere, Aunt Bet appeared to shoo them back inside their bedrooms. The next morning, their father woke the entire household to announce cheerfully: “I’m going now.” Two burly strangers duck-walked him down the stairs and out of the house. “Going where?” Jakie quizzed her aunt, not Seth, who twitched violently beside her. “To the nuthouse, darling,” Aunt Bet replied, blunt as ever. “Don’t expect him back.”

Francesca lived on air and cigarettes. Mealtimes, always tense, grew tenser. At lunch she served one half of a sandwich to each of her children, disgusted by their ravenous gorging, their gross, unappeasable appetites. If either flesh-eater paused to take a breath, Francesca snatched up his or her plate and, come dinner time, re-served the mangled bologna. Skulking around the table, clouding the air with smoke rings, she said often to no one’s inquiry: “You know very well your father’s not here!” As soon as she became a grownup, Jakie planned to have that epigram tattooed across her chest, a substitute coat of arms. Wisely Uncle Don confiscated all the guns and bullets from the gun case, but somehow forgot and left behind the kitchen knives. When Bet again miraculously appeared, Francesca was sawing at her wrist. “Brace yourselves,” Bet warned while collecting blood-absorbent towels and antiseptic.

“Your mother’s lost her reason.” Was reason very difficult to find? Jakie wondered silently as Seth drew crosses in the air. In the end, forced to rely solely on her own assessment, she went with the verdict: most likely.

“You are not by nature a wanderer,” the palmist in a red-hilled New Mexico town informed the weary traveller, a young woman now.

Enraged, Jacqueline/Jakie Shell sputtered: “A lot you know. I just happen to be two thousand miles away this very second.”