Living in a Red State Blues

The Advance Discount price for this title has expired.

Ordering direct from the publisher by check, the price will be $18 (shipping/tax included) and should be sent to: Paycock Press, 3819 North 13th Street, Arlington, VA 22201 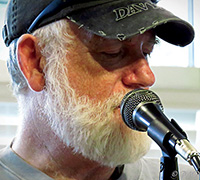 Anyone can bang on a piano, but there’s a melody in Douglass’ anger. There’s surprise. There’s light. A few times, he is even almost smiling. And if he feels soul-less without his father, just as America is becoming soul-less in a red hat, he fights for life and living all the more tougher. For him, the music that crashes out of the piano is “dirty. aged. ragged / but no less vibrant / than the rhythm / of your own / aberrant heart.” ~Barrett Warner, editor Free State Review

As anticipated from the title, these poems explore the sharp divisions within our country. But they go deeper – in language, in metaphor, and into a keen examination of how family and community shape us: “my own son could roll by in the opposite / direction and neither of us might know, / both focused on our own destinations, both / loaded down with our own baggage,” Douglass writes. “Red,” as theme, becomes a main character, a continuing thread through these poems. Red is metaphor, persona, color, symbol, and ultimately part of our collective mythology. The red state is both state of mind and state as geography. These poems are not rants – though there is one – but a discerning look at how we have all contributed to the divide that exists in our country in the 21st century. “We’re all so full of shit,” one poem declares, bringing the collective “us” into that community where we are all responsible for our divisions. We may not all be “in this together,” as white privilege, socioeconomic and political divisions offer separate realities, but we are all experiencing the effects of these deep divisions. So, come take a ride through the humor, pathos, heartbreak, and ultimately redemption that these poems offer. ~Pat Riviere-Seel

In a Post-Truth society, where sedition and insurrection are considered by the GOP as legitimate political discourse, and alternate facts and fake news are what they label any reality or scientific theory that is critical of their strategies and constituents, then Poetry has to be the cleansing agent that removes the dust of the everyday from our eyes. M. Scott Douglass’ new collection is a counterweight to the endless lies and reductive naming that passes as political discourse in contemporary America. In poem after poem he builds informative sentences that seek to dispel the blur of willful ignorance and push back against the perfect storm of cognitive degradation that allows con artists to prey on those citizens whose personal discernment amid the white noise feeds their posture of selfish communion with their fellow citizens, where the traditional ideas of patriotism and democratic thinking have been traded for personal convenience and expediency. Living in a Red State Blues is an antidote to the sophisticated propaganda machines like Fox News and Breitbart that have helped to foment the tribalism and reductive fear that are creating the schisms and conspiracies that are dividing the once United States into two distinct countries. The loss of the Fourth Estate and the rise of advocacy journalism are piled upon the fact that the average American college student or office worker cannot deeply focus on a task for more than three minutes, whose heads are stuck in echo chambers that reinforce their prejudice and inadequacy. In “The Color of Fraud,” Douglass begins: “We live messy lives out here” and posits that the fact of the matter is that common ground is a myth in our present culture, and as he rides his motorcycle across this nation’s states, both blue and red, he is an authentic and arresting witness knowing that Red sees any opposing viewpoint “as another oppressive threat to his sense of exceptionalism.” This is a book for its age, and it gives no quarter. I’ve read no other collection of poetry so intensely felt and spontaneously delivered. “I am the ghost of the storm that they would rather forget,” Douglass writes, and between these covers he tells the truth and looks directly at the camera as he does so, the narrator who needs no third wall between he and his audience, confident in the raw strength of his message. ~Keith Flynn, author of The Skin of Meaning and editor of The Asheville Poetry Review

Some people enter your life
like a hurricane, an angry
deluge of bitter bluster,
turn your home inside out,
its contents scattered, mangled,
blown up against your neighbors’
or flushed out to sea on
a twisting torrent of madness.
They stay too long, and when
they leave, they leave you
nothing, they leave you stranded
amid the clutter of a broken world
without so much as a wave goodbye.
As if a lover had dumped you
by tweet, spun the words out
across the globe for all to see.
In the end, you live with
the consolation that you
survived this oppressive storm,
that its maniacal term came
and went, a lonely blip
on history’s radar, and despite
its most expansive efforts,
Alabama had still been spared.

Mostly shirts, like new,
barely worn in several years
because I can’t wear red anymore—
the color has been commandeered
by lurid ideology, corrupted
in ways that make me ashamed
to be seen wearing it in public.
Even certain shades of pink
and burgundy are now suspect—
though not abundant in this collection.
I would donate them all
to Goodwill, but I doubt anyone
who shops there would be more
comfortable in them than me,
and those who would shop
for items like these
need to pay a higher price.
I’d like to sell them as a group,
will accept best offer, but realize
the market for such things
is quickly shrinking.
I would turn them into rags,
but the color is now so stained,
I can’t imagine anything
it could clean.

People are crazy and times are strange
I’m locked in tight, I’m out of range
I used to care, but things have changed

~Bob Dylan from “Things Have Changed”

My chapped lips kiss the wind
while they mouth the words
to a ballad that’s been camped out
in my head for the last hundred miles,
a gravelly voice grinding down
the pretext that we are all
in this together, that we are all
brothers on the road. After a pitstop
at a gas-n-go in Nowhereville,
it was easy to see the drawn lines
drifting apart, frayed threads of
a flag shredding in the wind.
Other bikers, dayworkers, a family
on the way to or from church,
strangers sharing friendly nods,
a wave, warm regards—all fade
to wariness when they see me
pull a mask from my pocket,
hang it from my ears to cover
my nose and mouth as I walk
to the door. I am now other,
an enemy in this state
of mind where anyone who
doesn’t echo dominant pre-
conceptions and mis-
conceptions can’t be trusted;
can’t be one of US.
The bard’s words keep rolling
to the hum of my tires on asphalt,
hypocrisy becoming clearer
with each two-finger salute
to a passing biker who is hidden
behind a helmet or dark glasses
and neck gaiter.
We’re all so full of shit.
The church guy in his black Lexus
keeps a MAGA hat in the back seat
for special occasions. His wife wears
her flowery polyester dresses prim
and proper for an hour on Sundays,
is bound tight to him and this way
of life, but keeps a little black skirt
in the closet because you never know
when a tempest might come
and blow it all away.

It’s like bursting in
on grandma and grandpa
doing the nasty, two
octogenarians wriggling
against each other on
the living room sofa,
clothes, glasses, and canes
strewn to places their hands
can’t reach when the action
is over.

You stand transfixed
by the moment,
the awkwardness of it all,
arthritic fingers flapping
for handholds on wrinkled flesh,
grandma’s eyes glazed open,
like prey in a leopard’s jaws.