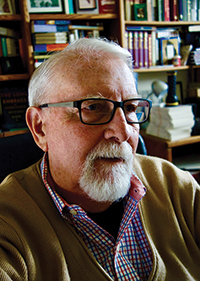 Robert Eastwood was born in Kansas City, Missouri. He graduated from C.S.U.L.A., and later acquired a secondary teaching credential from Saint Mary’s College. His work appeared most recently in 3Elements Review, West Texas Literary Review, Poet Lore, Triggerfish Literary Review, and Sow’s Ear Poetry Review among others. Broadstone Books published his first book, Snare (2016). His second book, Romer, was published by Etruscan Press (2018). Eastwood lives in San Ramon, California. Before teaching high school and becoming a poet he worked for over three decades as a manager in the telecommunications industry.

The spindrift pages of Robert Eastwood’s Locus/Loci begin “in a threnody of limits & regret,” but open outward in a generous embrace of the spiritual and physical coordinates that constellate a grateful life. The semaphore-arms of these finely wrought poems gather paradise from 96th & Main in Los Angeles to Cézanne’s Provence and beyond. Eastwood’s are poems for travelers who refuse to be tourists in their own lives, echoing the refrain: “it’s heart you earn.” ~Dante Di Stefano, Ill Angels

From L.A. to solitary coves in Laugharne, Wales, Eastwood scrutinizes place and history from myriad perspectives while charting complex internal geographies: “shyness is a token of being unfinished.” This magnificent book bursts with the things of this world: Lysol and butter, People Magazine and redwood trees. It richly fulfills what Eastwood suggests is the mockingbird’s calling: “to have the whole world below you / to reorder.” And we are made larger—and freer—for it. ~Diane Raptosh, author of Human Directional (Etruscan Press, 2016)

Lake of the Ozarks

I’m propped in a sun suit, my creaminess
aglow, in a brand-new skin.
Perched on the first step,
I lean against a mortared porch, a fat little Buddha.
Sun crimps the eyes, the stare is immobile.

I’m nine months old in an image
tucked by its corners in grandma’s album.
I’d turned over the scalloped print
(which lets me question time) & found
a date in a woman’s careful hand,

July 4th, ‘39, plus my nickname,
echoing like a call across a lake.
That date also has significance––
an echo as well––a bell-tone that rings
each American year, must mean something.

My baby-face is a bud of fleshy petals.
I wonder how blooming serenity
can be the me I know.
Others in this photo are but synecdoches:
a well-worn boot toe, a denim cuff

settled like Rembrandt’s slouch-cap about an ankle,
& a woman’s shoe buttressing my thigh.
They are mysteries, but mystery needs the dark,
& this is a bright summer day,
a holiday, my first 4th, yet filled with mystery.

Lou Gehrig, so sick, on this very day
tells the crowd at Yankee Stadium
I am “the luckiest man on the face of the earth.”
A loaf of bread cost 8 cents.
It is Tuesday.

Hitler covets Danzig.
I can know all these things, & see my semblance,
but still have no memory.
I’m left with what I imagine,
no clarity but absence, a black & white echo.

It was Sunday & on the radio, after talk
of faraway happenings, the try for Tinian

(an unknown place), Gordon MacCrae crooned,
oh what a beautiful morning. I saw

the ’41 Studebaker glisten in the sun
& I wore a tie & bibbed overalls.

Inside, cupboards yawned & emptied.
Father raised me to the stable sky.

I held onto his eyes as the ground quaked.
His face flutter-danced in my mind.

His fear electrified my hair.
That night we lay huddled by the door.

Waning shudders came, erratic shuffles,
as if the earth, off balance, drew back.

I dreamt of flames in father’s eyes.
The tremors that come, that strike us

suddenly, I had had no idea,
nor that, faraway, on a wind-raked peak,

whose hands were not stayed––golden llamas
surround them to blunt gods’ sharp ways.

Before the other grunts,
in a shack dour with cement,
the boss said, Your heart may belong
to Jesus, boy, but goddam it—
your ass—that belongs to me.
Soon I would be seventeen.
This was more than I’d ever made
& I thought
I owned my own heart.
So what, my ass was his. He said,
You take him Mule’n work’im.

Mule’s black arms hung like oak trunks
against his torn gray tee—
with a regal knowingness he looked
down at me, his face already wet,
& winked. Over stony scrabble,
with the carrier notched on my shoulder,
I hitched rocks, followed Mule
like a tied can. That summer
I tongued what seemed jeweled water,
digested troughs, never quite cleaned mortar
stuck between skin & scalp’s fletch.

Mule worked me good,
taught me his ways
for labor’s burn, the way out after,
when being there seemed unending,
the cool, that no one
but you could hear.
I learned it’s heart you earn.