Lost and Found in Kalamazoo

This book was selected for publication after entering the MSR Short Fiction Contest in 2005. 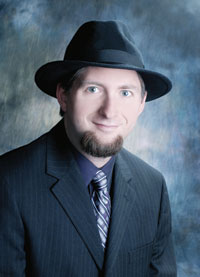 Jason Arbogast is currently attending Iowa State University, where he’s getting his M.A. in creative writing. After five years as a teacher, the return to studentdom is a welcome break. Sleeping past six in the morning is refreshing, too. After two years in Charlotte, North Carolina, though, he’s finding the flat, corn-filled expanses of Iowa’s landscape a bit dull. You never appreciate interesting geography until it’s gone. But the people are nice.

Jason grew up in Michigan, just south of Battle Creek. He could smell the cereal being made some mornings, if the wind was blowing just right, carrying the scent of sugar from the factories. If the wind wasn’t blowing right, he usually smelled the fertilizer wafting off of the field across from his house. Such is life in the country.

Jason is working on two novels while in graduate school, both of which feature characters from Lost and Found in Kalamazoo, which is his first collection.

The 2007 Diablo was heralded as the most environmentally safe family car ever produced. Unlike all other vehicles on the road, it emitted no waste products. Reportedly, this was due to its fuel source: the occasional tank of blood. Human was best, but animal could be substituted with only a slight impact on mileage.

As with any innovation in technology, there were protests when the vehicle was first introduced, most notably from PETA and other animal rights groups. As one activist at an early showing of the Diablo said, “Using animal blood for fuel is just wrong. It’s an atrocity worse than anything the fur industry ever did.” Nationwide protests were held, along with a failed boycott, but most people were more concerned with the price of gas, then at an all time high of seven dollars a gallon, than the rights of a few animals.

Another group, the United Church League, added their voice to the dispute when ownership of the Diablo became more prevalent. Although the use of blood as a fuel source was something they considered problematic, their main concern was more practical. “The disturbance caused by the car is simply too disruptive during services,” Pastor Marvin Savini once told an interviewer, referring to a design flaw that caused the Diablo to smoke and loudly shriek whenever a parishioner parked one on a church lot.

The president of the United States, whose campaign fund had received modest contributions from Hastur Industries, the Diablo’s manufacturer, was quick to address these complaints. In a press conference, he stated, “The CEO of Hastur Industries has assured me personally that the current model’s design flaws will be addressed in future models.” He also said that the blood consumption was, “…a boost to the economy, giving the meat and embalming industries the chance to sell what was formerly a waste product.”

The president’s speech assuaged many doubts, as attested by the doubling of the Diablo’s sales figures in third quarter since its release, making it the best selling first year car ever produced. This favorable response prompted the announcement by Hastur Industries of both an SUV, the Mamon, and a full-size truck, the Surt, that were scheduled to be released in quarter one of the 2008 model year. They were to have the same “demon-drive,” as the blood-powered engines were nicknamed, employed by the Diablo.

Rumors had even begun to circulate that the Big Three were going to start phasing out their internal combustion engines in favor of the demon-drives. No proof of this is likely to ever be found, though, because shortly after the rumors surfaced, the story of Tommy Johnson broke.

Tommy Johnson, a ten-year-old boy from Kalamazoo, Michigan, enjoyed helping his father, Jim Johnson, work on his car, a cherry red Diablo. It was while Tommy was assisting him one morning that Jim discovered a useful property of the Diablo’s engine. According to Mr. Johnson’s lawyer, “My client accidentally turned on his Diablo while his son was too close to the car’s serpentine belt. Unfortunately, his shirt sleeve got caught in the belt, which resulted in his son being pulled into the engine and killed.”

After that day, the fuel gauge on Mr. Johnson’s Diablo never went below full again.

Shortly after this incident, similar events began to be reported. Each time, a family member was somehow killed by the owner’s Diablo, and the car’s fuel gauge never decreased again. Killing a family member on the car’s engine block, people soon realized, kept the fuel tank filled indefinitely. Gas prices being as high as they were, many people were willing to make what they considered a small sacrifice for savings in fuel.

Before the story had been out for a full day, Hastur Industries began lobbying Congress to pass a bill reclassifying family members as alternative fuel sources in an attempt to mediate the certain media backlash. The bill was created and passed Congress, but was vetoed by the president, reportedly when he was informed that both of his children owned Diablos.

While it was popular in Congress, the bill did not have the two-thirds vote necessary to pass without the president’s signature. A few senators attempted to attach a reworded version of the bill as a rider to a foreign aid bill, but that failed as well.

Shortly thereafter, sales of the Diablo were halted in the United States. Within a few months, production of the car was ceased altogether when most countries made the selling of vehicles with blood-powered engines illegal.
Possession of blood-powered vehicles remains legal to this day; however, possession of a “fuelless” vehicle is illegal, though, as a California state police officer who wished to remain anonymous said, “It’s rarely enforced due to lack of interest and relative scarcity. We’ve got more important things to do than make sure every Diablo on the streets is legal.”

As can be expected, the few fuelless cars still in existence have become highly sought after by collectors, despite the ban. As Eric Morgan, president of the Arizona chapter of Diabolic Riders, a Diablo collector’s club, put it, “It’s the thrill of the hunt that keeps us searching for them. I’m looking for one for my son right now. I think he’d be perfect in a Diablo.”

Not one to be deterred from their setback with the Diablo, Hastur Industries has recently turned their attention to the energy crisis that once again faces California. As the ban on blood-powered technology only extends to vehicles, it has been reported that the former automobile manufacturer is attempting to apply this technology to the energy deprived state with the help of several government grants and subsidies.

“We just want to help get the world where we know it should be,” Hobart Hastur, CEO of Hastur Industries, said in a recent press release. “No matter how long it takes.”