The Advance Sale Discount price on this title has expired. For those who prefer to pay by check, the price is $19/book (which includes shipping) and should be sent to: Main Street Rag, PO BOX 690100, Charlotte, NC 28227-7001. 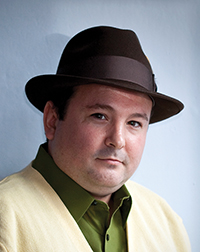 Joshua Michael Stewart is the author of two other full-length poetry collections: Break Every String, and The Bastard Children of Dharma Bums. His poems have been published in Massachusetts Review, Brilliant Corners, Rattle, and many other publications. For over twenty years, he has been employed as a counselor, working with individuals with special needs. He currently lives in Ware, Massachusetts, and you can visit him at Joshuamichaelstewart.com

In Love Something, Stewart reveals a bitter, sometimes monstrous personal history softened by compassion. For all he, his family, even country have suffered, this poet has chosen a life which refuses to be wasted. Stewart writes with a clarity of image and pacing which allows joining his pain, anecdotes, celebrations and humor to feel irresistible and welcome. Reading this book is as natural as curiosity and says love all you are able. ~Jody (Pamela) Stewart, author of Infrequent Mysteries, The Red Window & Ghost Farm)

Through gritty odes, heartfelt homages, hard-built elegies, and elegant praise poems, abiding love and gratitude rise out of deep pain and loss. Joshua Michael Stewart’s marvelous collection, Love Something, will leave you shaken, startled, but looking up in awe of the beauty and music left in the wake of gunshot: “a flurry of starlings—melody/swooping across the sky.” ~Kristin Bock, author of Cloisters and Glass Bikini (Tupelo Press)

A bird crashes against a window.
The children scream, the mother screams.

flapping their arms like wings, slam
into walls, smash into each other, whoop

and holler and laugh, and unsheathe their little teeth—
so tiny it seems they wouldn’t break skin.

This house that smells like a woodpile
under a tarp after three winters,

where a social worker wrote in her notebook,
This mother clearly doesn’t love this child,

where a river runs through the living-room,
and wildfires bloom in the bedrooms,

where there’s something about my heart that isn’t right,
and I’m an old rug left out over a porch railing in the rain,

where tomorrow will come, and I’ll still be here
in one form or another, here where I can take off my shirt,

and bare the scar on my shoulder
that fits my younger cousin’s mouth.

IT NEVER ENTERED MY MIND

I didn’t know the words or if there were words.
Miles Davis’ 1954 version being the first I heard,
just a kid living in New England woods
at the end of the 20th century, with jazz as exotic
and adventurous as Mongolia, Tangier, or Everest.

I stocked shelves at the grocery store and walked
a two-lane night highway to get home,
while the perfect timing of song metronomed
its way into my teenage loneliness
smack-dab in knee-high winter.

Once I found a dead raccoon, side of the road
and because of a guardrail and steep embankment sliding
into marsh, the semis rumbling and blaring,
I had no choice but to step over its mouth
twist-frozen in agony, its one forearm raised

as if requesting my hand, and for weeks
the melody of its body unraveled
until it became an unrecognizable tune.
Were there kits waiting for its return
or were no creatures sleepless without it?
All these years I’ve carried that life.

I don’t know the words of if there are words
to this kinship I’ve composed,
but know its haunting key
and like Miles’ trumpet solo
I hum it note for note
when I need company.

FOR MY BROTHER ON WHAT WOULD’VE BEEN HIS FIFTIETH BIRTHDAY

His greatest joy was to pin my arms
to the floor with his knees
and fart in my face.
The day he pushed me and I slammed my head
on a nail jutting out of the wall,
he full-blown blubbered
all the way to the hospital—
it was my greatest revenge.

For years we didn’t speak.
He spent much of that time
sleeping in abandoned houses,
with a habit of pulling a revolver
on his friends and squeezing
the trigger just to hear the click
and his own laughter.

He smirked
when I arrived to see how gaunt he’d become,
the slightest flash of tooth,
knowing I knew he was dying.

Always ready to fight the world,
when he needed a cane
he chose one that sheathed
a blade in its handle.

And when there was nothing left to say
and I told him I had to go,
he wrapped his arms around my neck
and I could feel his ribs through his flannel
as he heaved and wept,
the way he did
in the backseat of our father’s Pontiac
when he held that blood-warm towel to my face.

Cuckoo clocks ticked in every room of my mother’s house.
None told the right time, all fake. Latch and hinge—
open each face and you’d find a loaded pistol.

Two rifle cabinets in every bedroom, a dozen
shotguns draped in confederate flags behind beveled glass.
An assault weapon stashed inside a hollow wall.

“Don’t tell anyone what I showed you behind that wall,”
my stepdad said as we crept from a spare bedroom.
Fortify yourself. Shun the windows.

I was twelve when my brother pointed a snub-nosed
.38 at my face. He stood me against a wall,
outstretched the revolver, click. Mom kept a derringer

on her nightstand beside her water glass. Latchkey kids,
the first thing we learned was how to unlock every gun case.
We were alone in the house. My brother could pick any lock.

The first time I fired a .22 I missed the empty soda can by a foot.
The second time I shot a .22 I blew a hole in my bedroom wall.

A neighbor called the police. I shot out his garage windows.
I didn’t think he’d know it was me in the John Wayne mask.