Macular Degeneration and other stories

An Advance Sale Discount has expired. For those who prefer to pay by check, the price is $22/book (which includes shipping + applicable sales tax) and should be sent to: Main Street Rag, PO BOX 690100, Charlotte, NC 28227-7001. 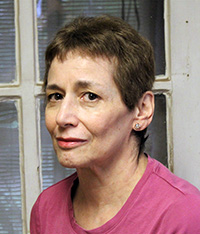 Like the lime margarita mentioned in the open of “Macular Degeneration,” Ms. Vigfusson’s writing is refreshingly sharp and equally intoxicating. With an economy of language, reminiscent of Raymond Carver, her taut narratives lure us, breadcrumb by breadcrumb, deeper and deeper into private worlds inhabited by vivid, complex characters. It’s not always pretty or comfortable behind the author’s closed doors, but drama is always on a slow burn and once you’re in, it’s impossible to turn away. ~Lorraine DiRienzo

Witty, comic, masterfully crafted, replete with brilliantly evocative detail, the short stories of Robin Vigfusson are a joy to read. I find myself saying, again and again, oh, that’s perfect, perfect. These stories do what great art is supposed to do: they leave the reader with unsettling, transformative insights. If the great 20th-century feminist/existentialist novelist and philosopher Simone de Beauvoir were alive today, these are the stories she would be writing. ~Robert D. Shepherd

Prepare to get hooked. Story by story, honed into gems from the shards of life, Vigfusson writes with the tender heart that beats in all of us, then goes for the jugular with wit and incite. Whether you’re exploring the railroad tracks of childhood or pondering a loved one’s reincarnation, Vigfusson unravels the knots that bind and blind us. You’re in for a treat with this highly entertaining collection. ~Natasha Peterson, Author of The 9-11 Story Book, Co-author of Memoir Your Way

When I told Daniel the lime margarita tasted like a menthol cigarette, he asked me what that even meant.

“Are you a teacher?” he wanted to know.

“Because you sure know a lot of words.”

I didn’t know these people and I was only there because their mail had been delivered to my grandmother’s place. When Daniel had opened the door, he was holding an empty wine glass and sweating profusely as if getting drunk was exercise.

“I brought over your mail,” I said, handing it to him. “It was sent to us by mistake.”
“Would you like a margarita?” he’d asked.

Drinking with him should have been out of the question since he looked about fifteen, but being naturally depressive, I never turn down a drink, a toke or any chance to improve my mood. He had dark hair, blue eyes, and a definite Timothee Chalomet vibe.

The house was a run-down bi-level, the living room so messy, it might have been ransacked plus you had to wade through toys strewn all over the floor. It was 103 out and the air in there felt as dank as ether. A cat and dog slept together near the blower fan, stretched out as if they were dead.

Aside from drinking margaritas, we sat on the couch watching the Home Shopping network which he said his Nana had left on. They were selling designer teddy bears and the toddlers in the room were mesmerized.

When I told Daniel my grandmother lived in the mobile home park, he wanted an invitation to the pool.

“You really don’t want to go,” I said. I found it kind of disgusting myself seeing the seniors half-naked with all that withered flesh dripping out of their bathing suits. “They just sit in the pool like hippos. Trophy hunters should really shoot them instead of endangered species, but they’re too ugly to put on a wall.”

“My mother’s fat,” Daniel said and I blushed, not sure if he meant to embarrass me or not.

He showed me her picture on his cell phone as if he was proud of her. She was a very plump, baby-faced blonde with heavy makeup and skin like white marshmallow.

“She’s pretty,” I said, “She looks really young.” She could have been his sister.

“She’s living with her boyfriend in Bakersfield. She’s not that fat, anymore. She had liposuction.”

“All over. She did a Gofundme for ‘life-changing surgery’, but no one donated so her boyfriend paid for it. Nana chipped in, too.”

On HSN, an English lady with a pert accent and bowl haircut was still showing her teddy bears. They were actually kind of gruesome with long, sloth-like fur and mute, stunned eyes as if she was holding them prisoner, but she and the hostess were hawking the hell out of them, insisting they were ‘absolutely precious.’

A customer called in and raved about how soft they felt.

“I own so many I’ve even had nightmares about them and my husband would say, ‘why do you collect them if they scare you so much?”

The hostess and the English lady tittered a little uncomfortably.

“Well, I’m a widow, now,” the woman went on. “I’m going to order mine and wrap it up, then give it to myself for Christmas.”

Daniel burst out laughing, but I thought that was sad. My grandmother had come to California after she was widowed because of a deluded stubbornness. She was suddenly determined to live in California before she died and she didn’t care where. She just wanted a California address and Pottersville was the only city she could afford. The median income here is like poverty level and meager as her retirement is, she’s still in better shape than most. Her mobile home is modern and she has central air conditioning.

One of the two toddlers crawled over to Daniel, pointing to her ass because her pamper was full.

I didn’t volunteer, either and the little girl stood up, whining, and I stroked her arm, sympathetically. She was adorable, a towhead with huge blue eyes. Her sister, maybe a year older, still sat on the floor in front of the large screen tv, enrapt in the teddy bears, with a binky in her mouth. She was also blonde, but her hair was curly and her complexion, the color of maple syrup.

“Are they your sisters?” I asked.

I was about to ask him what their names were when his Nana opened the door. She was a stocky woman in her sixties, wearing shorts and sneakers. Her lank grey hair was in a pony tail and she carried a tote bag.

“The bus never came,” she announced and Daniel said something to the effect that they changed the schedule every day because the drivers only worked when they felt like it.
She looked at me and smiled broadly. “Well, aren’t you pretty.”

She had a few side teeth missing, but didn’t seem self-conscious, maybe just glad she had enough left to eat with.

The little girl with the poop in her pampers hugged the woman’s hefty legs and Nana felt the child’s rear end.

“Somebody needs a change.” She fetched a fresh diaper from one of the bedrooms and changed the little girl on the floor.

“What’s your name, honey?” she asked me.

“Millie. Short for Emily,” I said.

“I knew an Emily as a child, but I never heard her say one word. Now, I think she might have been mute.”

“I’m not a teacher,” I said, annoyed. I was only a few years older than he was, though too old to let him paw me which he’d been trying to do ever since I sat down. “I’m in college.”

Nana’s faded blue eyes visibly glowed. “Are you from New Jersey? Me, too. Where do you live, honey?”

“What a beautiful town! I lived right near there in Little Creek as a child. I don’t know what it’s like now, but everything was green and the temperature never went above eighty. In those days, we played outside from dawn till dusk.“

People think California is the plushest state in the union, but it just shows how hopelessly shitty this town was that she talked about New Jersey as if it was Eden. The closest beach here is over a hundred miles away and the sun is different than in the North. There, you welcome it, but here it stalks you like a predator.

I couldn’t wait to go home. I was good and pissed at my parents for making me visit my grandmother while they vacationed in Tokyo. My mother never said much about Pottersville. She always said grandma had “retired to Northern California’ whenever anyone asked. She almost made it sound swank.

Daniel’s nana had changed the channel to the local news and they were talking about a young man who’d broken into a house just to take a shower since there was a water shortage in his neighborhood because of the drought.

“You know, I wouldn’t have even pressed charges,” Nana said. “I would have just told him to put his clothes on and please leave.”

~If you would like to read more of this collection–including the conclusion
to this story–order Macular Degeneration at discount today
and have it arrive at your door in May/June 2021. ~