Found and Compiled by

An Advance Sale Discount price for this title has expired. For those who prefer to pay by check, the price is $19/book (which includes shipping) and should be sent to: Main Street Rag, PO BOX 690100, Charlotte, NC 28227-7001. 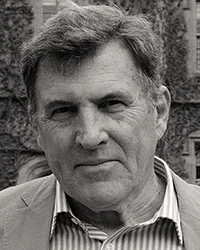 David Rigsbee is author of, most recently This Much I Can Tell You and Not Alone in My Dancing: Essays and Reviews, both from Black Lawrence Press. In addition to his eleven collections of poems, he has published critical books on the poetry of Joseph Brodsky and Carolyn Kizer and coedited Invited Guest: An Anthology of Twentieth Century Southern Poetry. His translation of Dante’s Paradiso is forthcoming from Salmon Poetry.

Donald Trump was 45th President of the United States.

In this bizarrely entertaining collection of quotations, the inspired perversity of the former president is on full display. He awards himself a Nobel Prize for having saved an imaginary country. He insists he’s not old, but young and in very good shape. He lies about millions of ballots being found in the garbage. He struts, brags, spins, swaggers, gasses and blows. He even unabashedly lusts after his own daughter. He claims that he signed “Mohammed, one of the great warriors of the middle east” while his political enemies want to “crush our farms, destroy our wonderful cows.” He weirdly boasts:

Now that Trump is no longer our president, we need to think about how this oaf, this crook, this rapist, this sycophant to autocrats, this narcissistic man-child somehow convinced millions of Americans he was qualified for leadership. This collection brilliantly demonstrates the travesty of his presidency.  ~Michael Simms

By the way, when I came in backstage,
A very, very powerful guy, a big, strong guy,
with tears coming down his face said,
“Thank you, Mr. President for saving our country.”
This happens all the time, all the time.
I said, “When was the last time you cried?”
He said, “I don’t know that I ever cried.”
Even as a baby, this guy didn’t cry, but he
was crying backstage. I mean, tears
are coming down, thanking me. And it’s true.
I was happily building buildings in Manhattan,
having a good time, having a nice, simple life.
And then I said to my beautiful First Lady, “What
the hell, let’s give it a shot!” And look what happened.

A Wall and a Wheel

Two things—and I say it—two things that never
get old. Remember the Democrats are saying,
“A wall won’t work.” Really? Tell me about it.
Walls work! That’s one of the reasons our numbers
are so good, but two things will never get old.
You know what they are? A wall and a wheel.
It’ll never get old, a wall. I see so many things,
and I see all these businesses, computers…
You come up with a new chip, you come up
with a new computer, you come up with a new laptop.
Three weeks later, you buy it, three weeks later,
it’s obsolete. But a wall will never be obsolete,
and a wheel will never be obsolete. You come back
in a thousand years: a wall and a wheel.

I’m going to tell you about the Nobel
Peace Prize, I’ll tell you about that.
I made a deal, I saved a country, and I
just heard that the head of that country
is now getting the Nobel Peace Prize
for saving the country. I said: “What?
Did I have something do with it?”
Yeah, but you know, that’s the way it is.
As long as we know, that’s all that matters.
I saved a big war. I’ve saved a couple of them.
They gave one to Obama and he had no idea why.
That was the only thing I agreed with him on.
I would get a Nobel Prize for a lot of things,
if they gave it out fairly, which they don’t.

Now I have my hands, I hear, on The New Yorker,
a picture of my hands. Look at my hands. They’re fine.
My hands are normal hands. This was Rubio that said,
“He has small hands and you know what that means.”
So, he started it. So, a couple of days later, I was on line
shaking hands with supporters, and one of the supporters
got up and he said, “Mr. Trump, you have strong hands.
You have good-sized hands.” And then another one
would say, “You have great hands, Mr. Trump. I had
no idea.” I said, “What do you mean?” He said, “I thought
you were, like, deformed. I thought you had small hands.”
I don’t want people to go around thinking that I have a problem.
I even held up my hands, and said, “Look, take a look
at that hand.” And by saying that, I solved the problem.