Making Payments on a Pink Cadillac

The Advance Sale Discount price for this title has expired. Those who prefer to pay by check, the price is $19/book (which includes shipping and sales tax) and should be sent to: Main Street Rag, PO BOX 690100, Charlotte, NC 28227-7001. 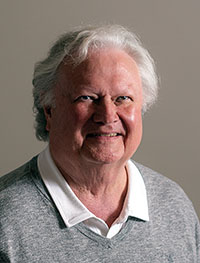 Robert Parham, retired from academic and other preoccupations, continues to write and publish. His recent work appeared in such journals as Southern Review and the American Journal of Poetry. Over the years his poetry and fiction appeared in an array of magazines and journals, including Shenandoah, Georgia Review, Northwest Review, Rolling Stone, Atlanta Magazine, and many other venues. He editor the Southern Poetry Review for over a decade.

Making Payments on a Pink Cadillac is a fun, wide ride–stories that are at turns rambunctious, meditative, unruly and poignant. In “Talking About Elmer” and “John Jay,” the protagonists seem to awaken from a dream only to find they have been asleep at the wheel, “caught up in one of those vortexes of fate that seem to gather up some men in its swirl . . .spitting them later out the top.” ~Phillip Gardner, author of Where They Come From, Where They Hide

Robert Parham’s Making Payments on a Pink Cadillac is a loosely-linked assemblage of sometimes quirky, always heartfelt stories bound together by farm work, cars, and the inexorably complicated relationships we all endure. Parham has the eye of a poet, the ear of a storyteller. This is a brave and memorable collection. ~George Singleton, author of You Want More: Selected Stories

There is plenty of humor in this fine collection, but also an unexpected poignancy as Parham’s characters attempt to find their way in a world they can’t quite figure out. Making Payments on a Pink Cadillac is a delight. ~Ron Rash

“MAKING PAYMENTS ON A PINK CADILLAC”

It’s funny the way everything in a life leads back to one place. For me, it’s to my car. I’ve named the car: sui generis. I have this stenciled, lower case, on the side. In the back window is my University of Arkansas pig hat. I have a woman friend who has strong feelings (not of the kind that would get her inside the White House) about the President. She borrows it occasionally for parties and demonstrations. She has the wild boar call down cold.

My car is pink. This is a sort of residual economic matter. I bought it from an old lady who worked for Mary Kay. It’s not easy to sell a pink car, especially a caddie. Too, if you repaint one, the resale price plummets.

I don’t get teased that much about the car. Or about anything. My nickname is Hoss, like Cartwright. I’m a large man. I’m nice, but I’m not sweet.
Philosophically, I believe life is a complication. On the other hand, I believe I lead a simple life. My friends are good friends, I have enough of them, I have had serious relationships, but I am not married. I am not a serial anything.

Today I have my list. It reads as follows:

Whenever I clean the study I automatically throw away my list without using it to make the next day’s list. It is not clear to me why I have an aversion to this task. I live in clutter, but I am not dirty. I take two baths a day and usually a shower. My bathroom is cluttered. There are three used towels, two used wash clothes, and a long counter filled with vitamins, tooth paste, medicine, electric razor, regular razor, dental floss, brush, comb, hair pick, mouthwash, foot spray, and some other stuff I cannot remember but know I mean to put away or toss.

I did not graduate from the University of Arkansas. In fact, I’ve never been to Arkansas. I’m an independent (if such a thing still exists) who voted for Clinton last election. I voted for a seventh party candidate the election before.

She is a poet who works at the Pelican House Restaurant. That’s what she puts on her income tax return for occupation: poet.
“Randy,” she said last night. “I think we need to bracket our romance.”

If you were in my shoes, this remark would make you very nervous, I’m sure. I’m getting used to it, though. I assumed, rightly, that we were headed into philosophical territory. And indeed we were. I was expecting Bergson or Wittgenstein, even though the cue word could have led the less experienced on a straighter path.

The fact was, Melody and I had been bracketing our reality for quite some time. Indeed, when she wearied of closing the brackets, of defining and subdividing, right down to figuring our flight patterns down to the street, then she was wonderfully romantic. There is nothing sexier than an intelligent woman, just as long as, in the end, she is sexy.
Melody is.

My left nipple is still a little tender from the nip she gave me. I winced, causing our bracketing to be bracketed. Melody coddled me, but I still wanted to circumscribe the next hour with intimations of the necessity of care as her explorations could include conquest, but I wanted to be certain they were practiced with a kind of benevolence.

The woman who sold me the pink caddie is perhaps the finest woman I have ever known. No, I’m certain now, THE finest person.

“I’ve always hated working for Mary Kay,” she said. “I debated just having the car crushed, you know, by one of those big squeezer things that turn it into a block of metal. But I was raised, you know, there’s just enough Depression in my past that I couldn’t do it, any more than I could kill somebody. In fact, I could probably murder before I could do that.”

I offered her a lump sum for the car, but she refused.

“Monthly,” she said. “That way I feel as though it is income.”

At first this seemed like a great idea. There wasn’t any interest. The payments were low, a hundred bucks a month. After a year, though, I began to resent them. They were like, well, alimony or something. I bought a small, speckled black-and-white notebook that I could put in my pocket. I entered all the payments and each month subtracted the payments from the balance. It became infuriating.

In July I tried to pay her the balance.

“You don’t have an early payment clause in the contract,” she said.

“Do you mean you want to charge a prepayment penalty?” I asked.

“I mean, there is no arrangement that allows for early payment,” she said. My impatience ate away at the levelness of her words.

I put my little book back in my pocket, went to the driving range, and hit two buckets of balls with my new Taylor Bubble driver with the 47-inch shaft.

If you want to read the rest of this story and others included in Making Payments on a Pink Cadillac, order your copy today.