In the wilds of Civil War-era Arkansas, plantation owner John Crowley has lost faith in the war and in the South. With his daughter Clara, he awaits the return of his son from the War, filling his time with plans of a scientific journey of discovery. Enter Emet, a golem, with a name but no memory, sold to Crowley as a slave and brought to the plantation. The “unfinished Adam” learns from Othello, a slave driver and master storyteller, while bearing the brutality of the plantation overseer, Mr. Winfrey, and his cruel sons. After tragedy strikes, Master John devises a plan to leave the South behind, to destroy it entirely, including his most trusted slaves. Emet struggles to obey his master as he tries to save Othello and the other slaves. With elements of magical realism and a dash of steampunk, this funny, engaging story redefines what Southern Literature is capable of being. 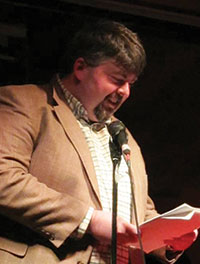 CL Bledsoe is the author of three novels: Sunlight, Last Stand in Zombietown, and $7.50/hr + Curses; four poetry collections: Riceland, _____(Want/Need), Anthem, and Leap Year; and a short story collection called Naming the Animals. He’s been nominated for the Pushcart Prize 11 times, had 2 stories selected as Notable Stories by Story South’s Million Writers Award and 2 others nominated, and has been nominated for Best of the Net two times. He’s also had two flash stories selected for the long list of Wigleaf’s 50 Best Flash Stories award. Bledsoe currently lives in Virginia with his daughter.

“Cort Bledsoe’s Man of Clay is Frankenstein set in William Faulkner’s south with a dash of Jules Verne–an eerie and enchanting book. Bledsoe’s golem–and the brutal legacy of American slavery–will not be easily be forgotten. What is humanity–and more importantly, who and what is human–will haunt you.”

With Man of Clay, C.L. Bledsoe crafts a lyrically soaring fable rooted in creation myths and the questions that underlie them: what is man, how do we know truth, and why is power abused when it can be used for good?

–Ben Tanzer, author of Orphans and Lost in Space

My name is Emet, and within my name lies my death.  Before I came to be with my master, my thoughts were shadows of shadows, men stretching over me like great willows at dusk, their long fingers touching, prodding, speaking words and ideas which I was trained to remember. In this way, I learned the writing of English and the basic skills that I would need in order to serve my master so that my compliance and fealty would naturally be complete. Then came the darkness of confinement which I lay within for weeks, interrupted only by the steady motion of the boat I came to realize I was upon, and the occasional comforting scritter of rats who gnawed on the wood of the ship.

Though at first, I had no way to reckon the passage of time, I noticed a pattern to the changes in the warmth and freshness of air that leaked into my crate and the movements of men upon the boat proper, whose presences became much more apparent when the air was warmest and freshest (though they often brought with them a decrease in freshness as well). In this manner, I was able to distinguish what I later realized was day from night.

I would’ve spent my entire voyage across the ocean from the ancient, arid lands surrounding the dead sea, from whence my clay came, to the new lands of the Americas encased in sweetly dying wood if it weren’t for the curiosity of my shipmates, whom I heard sneak to the crate to investigate it several times.

I reckoned the passage of several weeks during the voyage, far beyond the last tangs of spicy air emanating from the continent, before I heard the scrabbling of hands upon the crate, and the clomping of boots upon the floor outside. There was much hushed talk before the men left. Then, later, when the warmth of day had left the air and I lay staring into darkness, two sets of feet approached, cautiously. Iron clunked into the edge of my crate followed by the groan of nails forced out of wood until a line of night appeared, so bright in comparison to the darkness inside my container that I almost mistook it for day. The side of the crate heaved open and a blinding ball of light (a lantern) entered the hole, followed by a haggard face hidden beneath a lice-infested beard. And then another.

They both looked at me a long time and poked me with their stained, hardened fingers. They focused their attentions, at first, upon my forehead, running their fingers across the word carved there, muttering to each other. One of them drew a knife across my arm and was much impressed at the lack of blood. Abruptly, another man’s boots thunked to us.

“What’ve you done now, you bastards?” He said. He stuck his head inside the crate, scowled at me for a long moment, and then withdrew. The crate was pushed back together and the men left. I sat in this new brightened darkness until shortly after dawn, when the side of the crate was completely removed by the same two men from before, now joined by many others, including the one who had chased them off before, and I sat in the blinding dazzle of day, surrounded by hungry-eyed staring, swarthy faces.

The man who’d chased the first two off—I later learned he was the captain—explained that I was being shipped to the Americas for use there, and as soon as it was learned that I was a slave, the men lost interest in me.

From that day on, I was allowed to roam the confines of the ship. Though many of the men responded to my alien presence in a distrustful manner, it soon became apparent that I was valuable; I possessed great strength, stamina, and focus, and didn’t require sleep, and I was assigned many of the more unsavory and dangerous tasks, such as cleaning and maintenance. This pleased the men, as many of these tasks were of a solitary nature, and man, I was learning, tends towards unhappiness when left in a state of seclusion, though paradoxically, many of the sailors bemoaned the crowded nature of their vessel at great length. Through my new duties, I learned much about the ways of sailing and of many aspects of human anatomy and health and even attempted to make a few humble improvements to the living situations of the men.

Early on, the bulk of my chores were centered on the preparation of food, much of which was lost to rodent and bug contamination. The unhealthy appearances of the men I’d noticed was due in part to the lack of proper diet, something I’d been instructed in. I attempted to remedy both of these situations by capturing and dispatching several rats and using them to prepare a great stew, which the men thoroughly enjoyed until they learned what it contained. Once this was revealed, they accused me of poisoning them, which confounded me egregiously.

“Rats are dirty, filthy things,” the head cook explained to me. “They carry disease.”

This was something I didn’t understand. The rats aboard the ship were very clean creatures who constantly groomed themselves; they were much cleaner than the men. I tried to make it known that I’d checked all of the rats myself to make sure they were free of disease before using them, but the cook only shrugged. I carried a sheath of slate with me, but few of the sailors were able to read. Sometimes I was able to communicate by drawing upon the slate with a piece of crumbling chalk, but it had its drawbacks. Whereas a man could utter a word or phrase and have it be instantly understood, I was forced to explain myself piecemeal, each idea represented by an image which often, itself, had to be explained, until these were added together to form an approximation of my meaning. It was a slow process which few of the sailors had the patience to undertake. To explain the dangers of consuming the salt pork the men were so fond of, I drew a picture of a pig relieving itself and indicated that the swine then consumed its own effluvium, as they were known to do. Therefore, to eat the pig is to eat its waste. The head cook puzzled over the drawings, finally laughed sharply and would speak no more.

Next, I focused my efforts toward better food storage and elimination of opportunities for the rodents to spoil it, and I was much more successful with this, though the diet of the men was still lacking in certain necessary nutrients.