Martin Flores and the House of Dreams

Published as part of the 2003 MSR Chapbook Contest 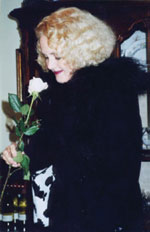 Lucinda Grey teaches writing at the University of North Carolina at Charlotte where she co-edited Southern Poetry Review for several years. She has won writers’ residencies in La Napoule, France, Mojácar, Spain, and Pátzcuaro, Mexico where this collection was conceived. Former chapbooks are Ribbon Around a Bomb, winner of the Quentin R. Howard Poetry Prize, Wind Publications and Letter to No Address, Andrew Mountain Press. Her work appears in Shenandoah, Tar River Poetry, Willow Springs, Southern Humanities Review and other journals.

MARTIN FLORES SINGS IN THE SHOWER

He raises an arm, lathers and begins,
The sea, mirror of my heart,
pleased, he tries it louder, lathering
his groin. He belts it out
and 19 mariachis in full attire
materialize behind him.
Shampoo, he orders.
They comply. The mirror fogs.
He tries Gardel, Dos gardenias para tí.
He bends to scrub his toes,
the basso soars. Painted birds fly off
the tile, one settling in his hair.
The mariachis strum and harmonize,
The first night that you loved me….
Martín Flores flips the towel,
then wraps it around his parts.
His arms fly out in crescendo,
the towel slips. Naked, he twirls,
faster, faster, the mariachis play,
the bird grips harder, round and round
they spin. The house falls away—
the troupe twirls in the street.
Traffic stops, a dog howls
and Martín Flores takes a bow.
The mariachis tip glittering sombreros,
the pájaro trills, the perro wails.
Arriba, Martín Flores! the women shout
until he rises like his voice—
a saint, a miracle at least.

In the Casa de los Sueños
Priscilla orchestrates the clouds at sunset
and the voice of the beautiful Martín Flores
fills the courtyard with flowers.

If you’re lucky, and surely everyone
is lucky here, you may catch his eyes—
sparks of obsidian to warm the nights
that follow sumptuous feasts
in the gilded dining room,
servers filling your goblet
with liquor of the gods.

Who could resist the dream
that beckons from the navel
of the moon—the southern
clime of balmy Pátzcuaro,
ecstasy only a breath away.

Martín Flores takes the hand of the blonde
and pulls her close. Then his hips begin
to rock. Like this, he says, back and forth
like a boat sideways in the surf.
His hips don’t miss a beat. La Máquina,
he sings. He twirls her through,
and again, this time in reverse.
I love your smoky eyes, he says.
pulling her arms around his neck.
You look like Bette Davis.

He postures over her as if to tango.
They sweep like that across the floor—
he, pulling himself taller than she
in her platform shoes. He glides her
backwards, hips never ceasing
to swivel. Uheepa Jee! his gutteral cry.
As the music slows he dips her
to the floor, planting his lips
on the crack between her breasts
swaying like guava jelly.