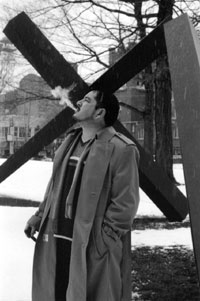 Richard Vargas was born and raised in Los Angeles and Orange Counties, where he attended California State University, Long Beach. From 1977-80 he published and edited five issues of The Tequila Review. He was stationed at Ft. Carson, Colorado, lived in Rockford, IL., and is currently residing in Albuquerque, New Mexico.

If I had not followed Richard’s poetic development over so many years, I would be stunned by the scope of recollection, the maturity of reflection, and the mastery of idiom in these poems.  Now, thinking back to how talented he was even at the start, I realize I should not even be surprised at what he has achieved here.

Gerald Locklin
Author of The Life Force Poems,
The Firebird Poems, and Charles Bukowski:  A Sure Bet

Richard Vargas weaves the humdrum aspects of everyday existence into the poetic fabric of a well-turned phrase, a hard-won insight, a burst of epiphanous light. It’s a rare talent that can do that. Vargas has my respect as a poet of people we often don’t think of as poetic. Everyone has poetry. Vargas has taken the extra difficult steps to realize the poetry of his life. His McLife.

Luis J. Rodriguez
Author of Always Running
and Music of the Mill

Richard Vargas is single-handedly re-energizing contemporary poetry and the American vernacular. The poems in this collection rock with zesty word-pyrotechniques, stylistic sommersaults, and an amazing penchant for cultural iconography that will make you into an instant fan of his work. If you are thinking of giving the gift of poetry to your friends and family, this is the book you want to give them.

then the girl, er, woman
asked me which would
i rather be: a hummingbird
or a woodpecker?
we all laughed but then i
realized they actually wanted
an answer and i was thinking
what’s next? would i rather
be a dung beetle or a wart
on a fat guy’s butt?
a piece of cheese
or a brand new
Penthouse magazine in a
men’s prison?
i began to think of all
the possibilities when
baby face cleared his throat
letting me know they were
waiting for my answer

and how good a
cold beer would taste
right about then

the Jesus i want to know

no, it’s not the one kneeling
in the garden asking the Old Man
for a break just before the local
thugs surrounded Him and said
“you in a heap of trouble, boy…”

at that moment did He hear the moans
of a host of angels?
did fear grip His mortal heart?

he was old
shuffled his feet
to a much slower drum
than the rest of us
looked almost comical
in his teal blue polo shirt
with the trademark golden arches
embroidered on his chest
the baseball cap suited for
pimple faced teenagers was
too big, rested on his ears
and tilted to one side
as he bussed the tables
left littered by single moms
and their undisciplined brats

i was going to say something
like “yo, pops, shouldn’t you
be out casting a few on a nice
day like this?” but the look
in his eyes said “don’t”
letting me know he had
been let go before his time
screwed out of his pension
while heartless young men
in expensive suits exercised
stock options, downsized for profit
vacationed in Cancun
and pulled his medical insurance
like a rug from under his feet

now, snot nosed kids
who think FDR is a new rap group
shoot him orders, hand him a mop
tonight he will go home
watch reruns of the Honeymooners
drink Jack Daniels from a pint
dream of winters in Phoenix
and the trigger he’s
lost the nerve to pull