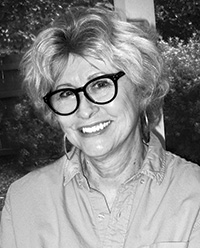 “Listen,” Betsy Thorne says, “Things are happening.” Whether she is writing about a son “fresh home from war” or a father’s move into a veterans’ Alzheimer’s ward, this is a book about what can and can’t be said when roles shift, when children grow up and parents grow old. So many of these poems crush me with their quiet truths. Listen. ~Ed Madden, author of Ark

Thorne’s collection is aptly titled. The poems express reverence for the rhythms, grace, and force of language and the “strangeness of moment / and place.” Each poem reveals a lyrical imagination steeped in personal images and memories: the fragrance of Southern pansies, sycamores, honeysuckle, beaches; the sound of cicadas and hoot owls; the joys of family and friends; the sting of loss—all a “blur in time,” a journey through wonder, anxiety, innocence, and death, but always, irrepressibly, with redemptive words of love. “Can you hear them?” the poet asks. We do. ~John Zubizarreta, Ph.D., author of The Learning Portfolio: Reflective Practice for Improving Student Learning (Jossey-Bass, 2009)

ON A PHOTO FROM SC LOWCOUNTRY

The boy obliged the request,
paused in his duties to pose
outside the railway depot.
He looked sharp in knee-britches,
coat and tie, a porter’s hat
squarely on his head. He knelt
in the dry dirt, his dog tucked
under one arm. It struggled,
but the boy, unfazed, held still,
all details of his face caught.

Against the dark clothes and skin,
the dog glows ghostlike
dead center, a blur in time.

FROM WHITE LIMB OF SYCAMORE

…a cicada shell suspends
midair, motionless – hanging
by a thread of silk, its length
visible, invisible
in shifting, canopied light –
it was not there yesterday
when children walked home from school.
The dog across the street howls,
alone in the house all day,
yaps now at the window as
two boys tromp by, single file.
The lead boy is brought up short,
his shoulders grabbed from behind.
At standstill, he laughs skyward.
He sees it then in wonder,
points to the spot above where
a cicada shell suspends…

it might have been
that a boy of ten shadowed
an older brother prone to
drunken trouble through
alleyways to shepherd him
home to bed predawn
Norfolk Southern on the rails
hoot owls in the hickories
a pittance of sleep to wake
by the shake of his dad’s hand
You’ll be late for school, son
paused outside the kitchen
in the icy dog-trot hall
steam billowing from stovetop
sheen on Ernestine’s ebony skin
Callie with the wide-brimmed
serving bowl Ern fills with grits
mother turned aside at sink
to shoot insulin in her thigh
the scrape of chairs on oak floor
boarders sitting down to eggs
stewed apples then out the door
ham biscuit in his fist
gone cold as the winter street