Meet Me at the Bottom / Kathleen Hellen

Meet Me at the Bottom 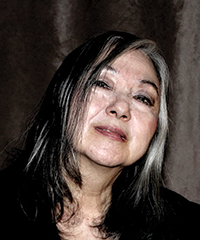 Kathleen Hellen is the author of Umberto’s Night, which won the 2012 Jean Feldman Poetry Prize from Washington Writers’ Publishing House. Her work has been honored with the Thomas Merton Prize in Poetry of the Sacred and prizes from the H.O.W. Journal and Washington Square Review, as well as from the Maryland State Arts Council and the Baltimore Office of Promotion & the Arts. She published two chapbooks, The Girl Who Loved Mothra and Pentimento, and the collection The Only Country Was the Color of My Skin. Brought up in the Southern Steel Valley around Pittsburgh, Hellen lives in Baltimore.

meet me at the bottom is guided by a meditative presence: “I should speak—say something meaningful, and therefore, true.” These lines are about people who struggle mightily, who know “money is like breathing” and “debt is death.” Readers are carried through “the history of misery,” across the “bridge between the wilderness of sin and heaven,” and eventually upwards “to the night sky for a hero.” Hellen’s virtuosic collection speaks, is meaningful, and therefore, human. ~Jeffrey Lamar Coleman, professor of English, St. Mary’s College of Maryland

Kathleen Hellen embodies a voice that has seen too much—but still lives…on the revving/curve of some belief. With a thickness of language and a courage that calls out injustice, she delivers a disturbing beauty: “…the night is just as much a hustle as it is a gunshot wound.” Hellen opens the wounds of war, poverty: “I feel like I should speak—say something meaningful, and therefore, true.” And she does, with a wild desire. ~Jan Beatty, The Body Wars, University of Pittsburgh Press

Kathleen Hellen’s Meet Me at the Bottom teems with rich, layered descriptions that dig down to the heart of injustice. In this brilliant collection, language pops with sound echoes and surprising syntactic leaps, tumbling and jumbling straight to the heart. Hellen capturing the damage done to outcasts, those without choices who try to avoid the camouflaged boobytraps arrayed in front of them since the day they were born. Powerful, unforgettable poems. ~Jim Daniels

…it is still conceivable that someone might possibly have escaped from their singing; but from their silence certainly never. ~Franz Kafka

I woke to windless calm, my ears unplugged, the excellent song intervening like it does some mornings, a consequence of living in convenience in conveyance, if I break a finger like I did (pin, splint), if I sit too long at the computer, my heart a little rabbit racing to the deadline
of an ekg

once, a siren quit across the street where they hung a purple wreath, a psychopomp, companion of Persephone, its wings relentless where I used to live, twice a week, it visited the parking
space across the street, its lambent voice a magnet to interstices, promiscuous the shriek loading up the stretcher, that Orphean summer the serenade of jackals, the owl without its feathers waking up from stone, painting red the streets that belong to it, the howl of cannibals tearing us to pieces—boombox of the needled, limp, the ones too far gone, the traffic parting like the waters in a biblical retelling, too late. I never know when, where it’s coming from, like a bullet to the head.

Take a cab from the foreclosure to a cut-rate habitation. The burnt sky floats over interstates of fireworks and pecan logs and freak motels. The clouds drift, impaled by trees, toward wasted fields of corn toward Armageddon.

a vase shaped vaguely Grecian. On the neck, a band of running dogs appears above the horns disturbing papers. On the handles, snakes. Around the body of the vase, zombies in their armies forage flesh. Never touch the clay, however tempted. Never point too closely at the canvas, a reproduction of the mansions where they live. Cross the line of observation. A hand (or claw?) is reaching. Take

the stairs not the wings you have inherited. In the room where you undress, a faucet drips. A clock ticks. Things like keys go missing. From the black hole of a 50” tv, evil pops out genius in 3-D. Aliens and slashers. Devil-priests. The loved ones you dismissed when they were living.

Fast-forward to the demons in your Hyding. Is it envy is it sloth? You are seven. You are lost. Renfields in the darkness right behind you.

—the moment of the air-lift from the embassy
a moment when its meaning pushed away
(from the Greek) is realized in our defeat, a moment

in which we might have learned—leaving
aircraft, helicopters, UAVs, trucks
420 Vietnamese and South Koreans—moments
have momentum

in Beirut, they push on (the root in Lithuanian)
Or Sarajevo set in motion

Words have ghosts, I watch it on tv
Five Afghan fighters near the Kabul gate, anticipating
take off, the transport plane at sunset taking

leave, the pale light breaking through like phosphorescence
the moment with duration, yet there’s evidence in Sanskrit

a moment can be moved by love, moments when we fly above
the dingy clouds, above the terror of the moment
surrender seats

she sings inside the belly of a song
the puppets writhing. I was riding on the shoulders
of a single cell, heaving in the swell
Let me in, taunting. The anthem of our discontent
to eulogize the last event—her angel signed to save
Homestead, the ironworks, the massacre of every shining moment

she sings as if she knows me (I could’ve sworn she looked right at me)
her eyes connecting sweat, fist
the history of misery
as if we’d met

under the bridge, under the radar of Carnegie and Frick
these massacres with sticks…this dance with Shiva
tick tick tick