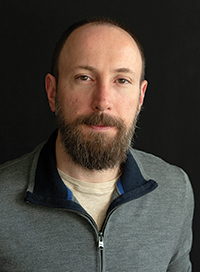 Joseph Kerschbaum has published eight collections of poetry and two spoken word albums. His recent publications include Distant Shores of a Split Second (Louisiana Literature Press, 2018) and Ken (Plan B Press, 2012). His work appears in print and online publications including failbetter, Umbrella Factory, Panoply, Cider Press Review. Joseph has been awarded a Greer Foundation Fellowship as well as an Individual Artistic Grant from the Indiana Arts Commission and The National Endowment for the Arts. Joseph lives in Bloomington, IN with his family.

The spry, surprising, fearless poems in Joseph Kerschbaum’s Mirror Box have so much love in them that the truth has to take to its corner. Tornados, death, mutilation, and a god-like force that loves to flex its destroying magic, these are all here in poems that put their arms across our shoulders. We may live in a mirror box, trapped by seeing only ourselves, but knowing that is what makes us completely human, crippled beings who can feel what is not there, what was taken away. ~Roger Mitchell, author of Reason’s Dream

Formally accomplished, moving between registers of plain speech and profound lyricism, the poems in Joseph Kerschbaum’s book Mirror Box consider the accidents inherent in life and death, as well as the almost unbearable accident of being someone who remains. The body has many ways of knowing and grieving, grappling and living. “I would show you / where it hurts /but when I point / to the pain / I point at air.” This book is ultimately a testament to the vast power of the imagination acknowledging that what the imagination sets fire to, burns. ~Laura Cronk

A mirror box is used in therapy to alleviate phantom limb pain. Through this deft metaphor, Joseph Kerschbaum’s Mirror Box explores an internal world of ghosts, phantoms, and shadows that beg for light–a world of self and others adrift in an existential puzzle. In the title poem, Kerschbaum writes “Only when I look / directly in the mirror / am I free of my phantoms.” Kerschbaum’s talent is looking directly into that mirror. ~Barry Harris, Editor Tipton Poetry Journal

Thousands of chances in a second missed.
Our talking like rush hour, a dance of near misses.

Fenders graze like lips. A mangled mess
with one small misguided

turn of the wheel. A wreck with no impact.
Delicate as traffic, our tongues swerve and miss.

The wreckage stretches for miles.
Travelers stranded, everyone missing

their connections. This conversation
is a million-car pile-up, we’re all misnomers.

The world at a standstill as she waits.
Gridlocked clocks stopped, both hands missing.

Joe, your speaking causes accidents.
Your words are missing children who aren’t missed.

Phantom Limb (i haunt myself)

How do the blind know
they are not still dreaming? I fell

Eyes see
for seven seconds
after the head

has been cut off. At the bottom

of the stairs I found the floor
cold. When the deaf speak

words they will never hear

they will never see detonate.

Yesterday I went to hug someone
before I remembered
I couldn’t. I just shook their hand

with the wrong hand, always

the awkward greeting,
but it’s the only one I have.

How do the blind grieve
for someone

they have never seen? I try not

to miss what’s missing, I wish
I could get past

the recurring discovery
of what is permanently gone.

I don’t find myself

lying at the bottom of stairs often
but when I do

I am not surprised, just bruised.

Mirror Box (wish i was here)

i.
Imagine a gun firing
next to your ear. Imagine
the constriction of your muscles.
Freeze the shock. Take
that state of your body,
pour it into one location –

your arm. Take that mongrel,
twist it behind your back.
Place your grasping fingers
in a vice. Now make your arm
disappear.

Leave the throb
in the ether.

break. I would show you
where it hurts
but when I point
to the pain

I point at air.

ii.
Slumbering limb
needling awake.
This is how

my arm feels
some nights.
This is how
the void

where my arm
used to be

iii.
This box
is a confessional.
I enter
alone. Remain alone.
Just me and the ghost of me.

iv.
The hand in the mirror
is not real.

v.
This is my hand. That is a mirror.
That is my hand’s reflection.

vi.
Each fingertip feels
like a déjà vu –
something that has
and hasn’t happened.
Something alien
and intimate.

The muscles
that don’t exist
begin to unclench
like the jowls of an animal
releasing, allowing
you to live.

Only when I look
directly in the mirror
am I free of my phantoms.

vii.
Ask me
to point
where a void
unlocked its jaw.

Ask where I reside entirely
but there is only air and reflection.

I point at the box.

viii.
The hand in the mirror is real
enough.