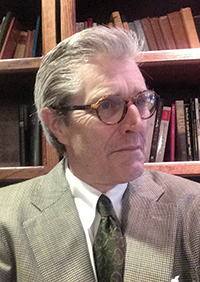 D.G. Geis lives in Houston, Texas.  He has an undergraduate degree in English Literature from the University of Houston and a graduate degree in philosophy from California State University. His first full length collection is forthcoming from Tupelo Press (Leapfolio) in January, 2017. He will also be featured in a forthcoming Tupelo Press chapbook anthologizing 9 New Poets and is winner of Blue Bonnet Review’s Fall 2015 Poetry Contest. He is editor-at-large of Tamsen and a finalist for The New Alchemy (University of Alaska) and Fish Prizes (Ireland).

What a ride! Through an engaging cast of characters in real and imagined encounters, D.G. Geis rails at the human condition. Witty, elegiac and often irreverent, these poems are quick takes that snap, crackle and pop the big questions. Though “Life is loss” and “things go on/ without you”, he allows “the world is full of wonder” — “So pray for the innermost/part of you/to hold together”. A big Yes. ~Lynne Burnett

Greg’s glass of poetry brims with the likes of Wallace Stevens, a teen suicide, and Mr. Carwash. “The royal blue/ of an unopened vein.” I want to run outside and stop strangers in the street. Read this, I want to shout. These words will kick your ass, and you’ll thank him after. “I feel like candy in a piñata/ Getting the shit beat out of you/ by blindfolded children/ is what life’s really all about.” ~Devi S. Laskar, Author of Gas & Food, No Lodging

In Mockumentary D.G. Geis flings the gauntlet and we fortunate readers watch it bounce from Aphrodite rocking Jimmy Choo stilettos to Li Po pissing on a rainbow, careening back from suicides and failed marriages and lost dogs, challenging us with laughter, even in the face of disaster and lives resembling The National Enquirer headlines, highlighting, through scenes of follies and failures and glorious imperfection, our disheveled but still intact humanity. ~Robert Okaji

down the sidewalk
or the neighborly oaks lining up

to shake hands across the street,
the garbage truck

stumbling down Del Monte
with all the lives, neatly bagged,

crushed in the back.
And don’t forget Mr. Sun,

the bright eyed prosecutor,
rising to make his case,

the “For Sale” signs
further down the road,

and the mailman
in his light blue uniform,

This is where the fat lady sings.
On streets with names like Wickersham,

that fatten into liveried streets:
foie gras which even Croesus can’t upchuck.

Above the rooves, her nipples jut
where night’s décolletage sticks thing together

like pizza flyers tied to doorknobs.
A little further is the Country Club,

and bus stops where the maids all clump.
And spastic ghosts still hovering

beneath the eaves, rich old coots long dead,
dazed, diffused, and before that, catheterized

by LVNs in beat up Fords.
And no sirens trill to bring them home.

With fifteen story pines to croon “Goodnight”
and dream of mansions they’ll become.

One fine day quarter-sawn and Tyveked,
wrapped like Jesus in his borrowed tomb,

sacrificed by Aztecs in utility belts.
Bare chested, hearts in hand, they wave

to garbage men and gringo nannies
from skeletons of wood.

And all the uppity realtors
driving slowly by,

leaning out their windows,
watching, waiting,

I Google mapped the place you died

You were not there, of course.
but blasted off to parts unknown,
unlike the bullet in your head
which had a known trajectory.

The pistol you dropped
demanded its own territory,
The Peoples Republic of Blood and Brains,
and a map of your unmaking.

Now I am the one
who looks down from heaven.
An obedient satellite
spying out your memory.

How strange it is
that the world you haunt
is such a magic place!
By one click of the mouse,

see how I make it larger.

O Lord God,
could anyone have made

anything as fucked up as LA?
I’m sure from your height

everything looks like bird droppings
on a Hyundai hood.

in lively downtown Burbank,
it appears you have a plan.

Oh, I don’t blame you
for wanting to off yourself.

But must you take
the rest of us with you?

listening to a lady from Des Moines
talk about something called the LA Galaxy,

which I am beginning to suspect
is not a sports team,

but a blurry spot on the chest x-ray
of your wavy particleboard Creation.

And while traffic stalls
on West Empire Blvd,

I feel it my bounden duty
to register a formal complaint.

The actors are untrained,
the plot is redundant,

the Director is self-indulgent,
and like all cinema verite,

what makes it so real,
is that absolutely nothing is.

So please tell me
that I haven’t accidentally stepped

through a wormhole
in my immaculately clean

passed through to an alternate universe,
and violated The Prime Directive

by bringing this to your attention.
Me, a hanged man, wiggling his toes

just before his neck breaks.
And You, you faithless Bastard,

with an eye for the ladies.