Mrs. H. and Her Tooty-Falooty Ways 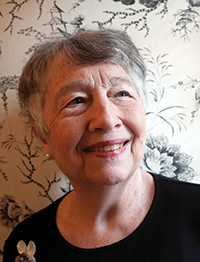 These witty, inventive, and heartbreaking poems snap together like the chapters of a well-paced novella. An adolescent narrator, stationing herself on the edges of her friend’s family, peeks beneath the glittering surfaces of late 1940s privilege—Mrs. H’s monogrammed linen, Mr. H’s polished Bentley, extravagant gifts for their daughter—to discover loneliness and disorder in rooms “so quiet you want to go home.” Like the imprint of red lipstick the enigmatic Mrs. H. leaves on the martini glass, the poems in Dede Wilson’s newest book leave their unmistakable imprints on the reader’s memory. ~Rebecca McClanahan

Despite its lighthearted title, this collection has a richly-textured poignancy to it. Its naïve, worshipful lamb of a narrator recreates the lost world of Mrs. H and her family, with all its terrible cracks and flaws, down to the flourish of a cigarette holder and red lipstick on a crystal martini glass. The dramatic power with which these characters are rendered floors me: Mrs. H. “laughing her laugh that has no laughter in it,” her daughter who “stays in love with trouble,” Mr. H. in his monogrammed dressing gown. Nostalgic, whimsical, often wickedly funny, these poems are a bittersweet joy. ~David E. Poston, author of Slow of Study

Isn’t it nice once in a while to open a collection of poems and chuckle from beginning to end? So it goes with Dede Wilson’s book, MRS. H. AND HER TOOTY-FALOOTY WAYS. Birds on a wire flutter at the sound of her voice, and people sigh when she comes their way, we are told. Impossible! you say of this woman, but in truth haven’t you known someone who closely resembles her? Mrs. H.—a fascination! I found it hard to close the book, find it easy to open again and again. ~Julie Suk

Polished goblets and finger bowls.
Linen so starched the napkins rise
like yeast rolls. (You must not draw
on her white cloth with your fork!)
The maid, in apron and cap, serves you
roasted oysters. These you recognize,
so lift your miniature fork. Next, an artichoke,
upright, and a ramekin of melted butter.
You follow the others, peel
and, with your teeth, scrape the flesh
from the leaf. (You watch as Mrs. H.’s daughter
rips into the heart.) After a steak appears, so raw
you have to look away, the maid offers platters–
asparagus, mushrooms, baby potatoes.
Swiss chocolates follow a silky flan.
Mrs. H. is tilting her head toward her empty glass.
Mrs. H.’s daughter is mashing her fingers into her sweets.

Mr. H. is telling a story. You wonder how he will spin it.
Mrs. H. is laughing her laugh that has no laughter in it.

MR. H.’S FAVORITE STORY
IS THE STORY OF HIS HOUSE

He searched across the state for antique brick
and paved his perfect roof with perfect slate.

His window panes are made of hand-blown glass
and each hinge and knob is solid brass.

He must have been the very first to have
a home controlled with central heat and air.

His carpeting was measured, hem to hem,
and rooms designed to fit without a seam.

In his desire to please his perfect spouse
he let her draft the blueprint of their house.

Mrs. H. sketched and erased–and erased–
until each room was in its perfect place.

He studied her plan, then took a second look.
“My dear, there is no kitchen. How will you cook?”

Mrs. H. can scramble an egg.
You’re not sure that she can
scramble two. But she can shake
and pour a clear martini
into a crystal glass, sit
in that white chair in that white
room and, lifting her red nails,
raise that clear glass to her red lips,
leaving the imprint of those lips
on that clear glass until the day
is smeared with pleasure.

SHE WEARS A RAT IN HER HAIR

Your friend insists there is a rat
under her mother’s hair.
Not a real rat!
It’s only a hairnet

stuffed with hair pulled from her brush.
She places this roll at the back of her neck
then lifts and pins her long black hair
up and back around this rat,

making her look strict and severe.
But when she knocks
on your sixth-grade classroom door
and enters without being asked,

her strappy heels click as she walks,
her long skirt falls into swirls,
and suddenly Mrs. H. becomes
the most exotic mother in the world.