The Advance Sale Discount price on this title has expired. For those whpo prefer to pay by check, The price is $20/book (which includes shipping) and should be sent to: Main Street Rag, PO BOX 690100, Charlotte, NC 28227-7001. 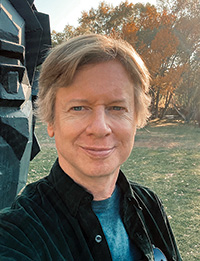 Max Talley was born in New York City and lives in Southern California. His writing has appeared in numerous journals, including Vol.1 Brooklyn, Atticus Review, Entropy, Fiction Southeast, and Litro. He won the Best Fiction Contest at Jerry Jazz Musician magazine in January 2021. Talley’s novel, Yesterday We Forget Tomorrow, was published in 2014 and his surreal collection, Delirium Corridor, debuted in December 2020 from Borda Books. He teaches writing at Santa Barbara Writers Conference and at Santa Fe Workshops. www.maxdevoetalley.com

These stories show an artist’s eye for relevant detail, a musician’s ear for pitch-perfect dialog, and the writer’s heart for dramatic beats. ~Shelly Lowenkopf, The Fiction Writers’ Handbook, Love Will Make You Drink and Gamble, Stay out Late at Night

Talley’s unique ability to imbue the quotidian with the slightly surreal (and often hellacious) qualities that truly do comprise day-to-day existence is what makes My Secret Place so relatable. Not just for artists or “celestial vagabonds,” but for any person with non-vegetative brain waves. From tales of New York art hacks who drive out the semi-pure of heart to satirical missives aimed at the publishing industry’s so-called taste, Talley deftly mocks life’s absurdity and leaves the reader wishing their own brushes with the Kafkaesque were as humorous. ~Genna Rivieccio, author of Corona(tion) Year, Vol. 1 and Vol.2 and editor-in-chief of The Opiate

Writing well is hard. Writing funny is even harder. Max Talley has done both. His sense of humor and sharply-honed writer’s craft informs a collection smoldering with savage satire. There’s much to enjoy as he beams his cultural laser at diverse subjects. Read it now: My Secret Place. ~John Reed

We’re Here to Protect You

“Jill, do you ever hear whispering?”

“Late at night, when you wake up and the world’s gone quiet.”

“Uh, no, Lori. What medications are you on?”

“That has crazy side effects, Lori. People drive, make phone calls, or even hook up and don’t remember later. Maybe you weren’t really awake.”

Lori Beckman rode in the back seat of a towncar bumping and jolting through the Marina District of San Francisco arguing with the driver.

“We are following the shortest GPS map route. Do you wish to take a longer way?”

“The least mileage would be the fastest.”

“Not necessarily,” she replied. “We’re hitting stop signs on cross streets. The lights are timed on Lombard so we could go a steady speed.”

“I don’t understand that,” the male voice said.

Lori hated arguing with drivers, whether her ex-husband, work associates, or Uber employees. Debating with a driverless car struck her as absurd.

She began yoga breathing as they passed clusters of cypress trees in the Presidio until the fogged lights and mass of the Golden Gate Bridge loomed ahead. Lori was forty-six and her ride a job perk: being driven home to Marin County after a long day with overtime.

She had worked at Huzzah through triumphs and scandals, through irrelevancy and rebirth. Ten years was a long stretch at a San Francisco tech company—where people rose then fell, often in quick succession. Perhaps Lori had lasted because her rise had been incremental, with no sudden promotion beyond her capabilities.

Huzzah previously expanded from a search engine site to adding an entertainment streaming channel. Now it planned to debut a Costco-like warehouse, except manned by robots. Customers could order online food supplies to be delivered the same day by drones, a fleet of vans, or even express mail service. They offered Lori a position on a team overseeing and implementing Huzzah Foodlink in the Bay Area.

Desperate to pay off her mortgage, Lori accepted.

Suddenly she received an astounding salary—if she lived anywhere else. However, Lori endured seventy-hour weeks for the last month with no let-up in sight. Making a fuck-ton of money held zero advantages if all one did was work, travel back and forth, and sleep. No time for a life. The disintegration of her marriage four years ago had only exacerbated her sense of isolation.

“What? You already took a year off to get your life together. If you stay, you’ll graduate next spring.”

“Don’t freak. Remember you said always line up a gig before ditching your current one?”

Lori felt a nascent migraine swell inside her skull. “This better be good.”

“Dad is totally cool with it.”

“Of course he is. Your father lives on an organic farm in Hawaii. He’s the compost whisperer or something.”

“Dad followed his bliss. Anyway, Omar hooked me up with a sweet opportunity.”

“Mom, gas pumps have screens now. As a host, you get drivers undivided attention for one to three minutes. Longer at charging stations. Plus, it’s a launching pad to Reality TV and infomercials.”

“I knew you’d be proud.” Melissa’s tone shifted. “But there’s something else.”

Lori didn’t like conversing in Huzzah’s driverless cars. Coworkers claimed the vehicles had microphones for data mining, and to spy on employees. “Driving now. Call you in fifteen.”

Melissa waited on the small porch texting. Never a good sign when she traveled over from Oakland to speak in-person. Her Honda Civic sat blocking the garage.

“Hey, Mom.” Melissa squinted at the windshield. “Those driverless cars are so freaky,” she said. “I heard airlines fly mostly pilotless now. I mean, pilots are in the cockpit, but just to reassure passengers.”

Lori cut across her front lawn until she tripped, sprawling forward onto the dewy night grass.

“Mom, you okay?” Melissa dashed over. “23andMe results said because of granddad, I’m at a higher risk for dementia. But I figured I had fifty years.”
Lori examined what she assumed was a displaced stone, then laughed. “It’s my Tertill.”

“A little robot gardener that trims weeds. Runs on solar power. It’s supposed to be asleep. Usually only functions in the morning.”

“That is so creepy.” Melissa helped her up. “I’m glad it wasn’t a condition.”

“I don’t have a condition.”

“So what brings you over?”

“I’ve been stressing about the job opportunity, and Mingo dumping me.”

“Yeah, he chose prison over me.” Melissa’s mouth trembled. “So I need money for airfare to visit dad and chill awhile. Have to be relaxed for my new TV gig. Is five hundred cool?”

“Totally.” Melissa nodded as Lori transferred funds on her iPhone.

Lori knew her daughter regarded a loan as a suggestion, not a contract.

“Thanks, Mom.” Melissa hugged her and drove off.

Inside, Lori told her Amazon Echo, “Alexa, tell Geneva to start cooking my meal,” then watched an episode of The Americans. She swallowed an Ambien afterwards. Tomorrow, Lori wanted to look rested for her date, rather than harried and overworked. Fortunately, Huzzah had granted her a rare weekend off.

Online dating in San Francisco had been problematic after her divorce, and her thirtyish, tech coworkers dated younger women.

The sleeping pill proved effective but Lori jolted into awareness at an eerie sound outside. A ratcheting noise. Mechanical. Lori drew her bedroom curtains open and saw the Tertill roaming around the garden under the moonlight. It was mowing, carving a huge word into her lawn: HELP!

To read the rest of this and other stories included in My Secret Place, order your copy today and have it delivered to your home or office when it is released in July/August 2022