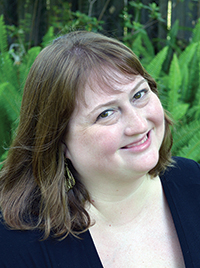 Caitlin Jackson attended and graduated from Oberlin College and the University of Central Florida MFA in Creative Writing program. She has wanted to be a writer since she can remember, even dictating stories to her mother out loud before she could write them herself. Caitlin currently works as a Technical Writer, but survives as a poet. She lives in Winter Springs, Florida with her engineer, Chris, and her Jack Russell terrier mix, Loki, who may just be the actual reincarnation of the Norse god of mischief.

Dislocations and disruptions abound in these powerful poems. Figures from myth are “always changing, bones cracking, fingers melting into hooves,” and the poet herself is enmeshed in the turmoil. Yet even as office life and its “insect clicks” close in, she stays connected to the planet, to its sunlight and dust, palms and pelicans, snow and purple mountains—the spinning home she makes for herself and for us all in her remarkable first book. —Pamela Alexander

Caitlin Jackson’s poems roam the landscape of dreams, myths, wishes, and the mundane day-to-day, guided not by a compass but by an openness to life’s surprises, good and bad. And how refreshing to read poems without pretense, without gimmicks. Her modest but fearless voice is rare these days. — Don Stap

With sharp vision and an eagerness to wipe sleep, dreams, and childhood myths from her eyes, Caitlin Jackson gives us a speaker who rises above the myths that can keep us buried. “At 13 I took the body of Christ / into my mouth for the last time. I left him to dissolve— / mush between my teeth.” The speaker is resurrected again and again—into her own language, her own dust, her own world. — Terry Thaxton

I came close once.
It was like falling asleep
on a ship,
or a train.
Soft waves, steady
track clicks, your breath
in and out imagined.

Now in the dark of mornings
when some restlessness wakes me—
a building’s sigh, your face yanked
from a dream—
I have to pretend I am close again
to slip back to sleep.

And in the bright day
of cruise control and toothpaste
taste leftover and screens
after screens I know
I have left something
on the train
or the ship.
The black and green of a broken
earring, a smudged window
thumb print, the opened
umbrella of my closed eye lid.

Empty handed, I stand on the shore
waiting for rain.

The Lines are Busy

From one continent
to another
I am chucking bottles into desert sands.
If sand is glass and glass is water
why can’t this sea shift with currents
and carry me further?

But my words are wedged in dunes—
static.

Oh,
wait for me my love
I will throw back my head and howl
when the moon is black and gone. I am not.
My pain sifts through brain cells
like your boat putting into shallows
reeds waving shyly at our toes.
I’m blaming you.

I can see you sudden and sharp sometimes
swaying palms down in a foreign
Applebees, the tequila burning off your distress
like fuel boosters falling through the atmosphere

until they splash into sea, a letter tucked inside,
illegible by now.

Cerberus Lost in the Woods

can’t find the way back to his gate.
Forever ago, they left him alone there
to trace the passage of time
and count all souls with a six eyed glare.

He is mighty.
When he raises his heads, the air
holds all scents and in his rolling eyes
are the reflections of all things.

But in everything nothing was familiar
until finally now thick
in trees he can twitch ears to bird song,
leave broad paw prints in snow and fill nostrils
with smells of beating blood.

This is the world he was waiting for.

Below unguarded the dead drift up
gray ghost petals shedding from fingertips,
from toes, from tongues and there they are
in your doorframe
to call in low tones
what is for dinner and have you missed me?