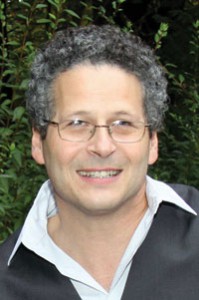 Paul Hostovsky is the author of four previous books of poetry, Hurt Into Beauty (2012), A Little in Love a Lot (2011), Dear Truth (2009), and Bending the Notes (2008). His poems have won a Pushcart Prize, two Best of the Net awards, numerous chapbook contests, and have been featured on Poetry Daily, Verse Daily, and The Writer’s Almanac. He works in Boston as a sign language interpreter at the Massachusetts Commission for the Deaf. Visit him online at www.paulhostovsky.com

In poems funny and wise, playful and sad, carnal and spiritual, locker-room casual and master-class artful, Paul Hostovsky names friends, enemies, writers, lovers, gentleman plumbers, and many others. In the process, he names the paradoxes and complexities that define us all. These poems “smile at you through the pain,” and you smile back in painful recognition. This book—maybe Hostovsky’s best yet—not only names names, it kicks ass.
–Eric Nelson

Naming Names is proof positive that Paul Hostovsky just keeps getting better. Here again the acute, bemused, loving attention to the idiosyncracies of our polysaturated world. Here the New Jersian candor. The delight in language—”that predacious lefty sidearm pitcher with / strabismus, and a penchant for wild pitches” . . .  “the sensation always a bit hairy— / as the word seeps down into your  vocabulary” . . .  “powering the buoyant / antique iridescent technology of the poem.” Here again—in spades—the enlarged, Whitmanian heart.
–Nick Norwood

This book feels like a staring contest between the profound and the  promiscuous. It goes back and forth but overall the profound wins out, in part because it’s performing some very clever jiu-jitsu. These
poems spiritualize the bodily functions. They are devoted to the body in all its juices. Hostovsky’s voice argues well for its humanity, with just enough cleverness, introspection, and self-awareness to balance out all the negative capability wanking in the loo.
–Frank Gallimore

I like this guy
before we even meet.
He’s the only one
who called me back, and then
he wipes his feet
for a very long time
on the mat
before coming inside
with a little bow,
then setting out bravely
for the upstairs bathroom
a few steps behind me,
like a lieutenant
or a constable. I look up
‘meticulous’ after he leaves,
and am startled to find
it comes from fear
in Latin. Because he seemed so
fearless, knowledgeable,
mindful of the whole long
history of flood. He was
a very good listener. “It could be
the spindle in your shower valve,
or it could be something
in the drain assembly,” he said
as he drew the bath,
then drew a wrench
from his plumber’s belt
and climbed into my tub. His entry
in the yellow pages
was the humblest
of all the plumber ads
with their splashy logos
and trite slogans. It read, simply:
C. Bowen, Plumber,
with a number
that rolled off my fingers
like an arpeggio.
He nailed it in under
an hour. And his bill
which has come in today’s mail
like a coda
is simply too beautiful
to contemplate.

The urinal
cake, that deodorizer
thingy: small, white,
hockey puck-
like, lozenge-like,
lemon Italian ice-
like, deceptively
fragrant in the urinal’s
sepsis, ultimately
irresistible
to the three-year-old
that you were
when you reached your hand in
to take it
and put it in your mouth
while I stood next to you,
not seeing you
because I was looking
blissfully up
at the dropped ceiling,
peeing
the jumbo regular
coffee of the last
rest stop out in torrents,
exhaling contentedly,
feeling good about
life in general
and you and your beautiful
mother waiting in the car
in particular,
not to mention my perfectly
functioning bladder
emptying itself
the way it should,
which always feels
good no matter how
you cut it.

I whacked off in these woods once.
But that was a long time ago when
everything rhymed a little with
the trees all facing upward and the sky
was full of itself and no one
was around. And everything smelled good.
I smelled good myself. A sweaty,
muddy, musky, burning smell of
autumn or late summer or very early
spring was in the air, and I was so
excited to be so young and existential
and solipsistic, that I peeled off my shirt
and pants and underpants, and stood there
erect and steeply rocking under a sycamore,
my peeled bark in a little pile at my feet,
my head tossing in the wind, my mouth
opening, wider, wider, as if trying
to pronounce all the vowels at the same time
and failing deliciously, and sinking down
to the ground, totally spent and spluttering
a few choice consonants like kisses meant
for the pursed lips of the wind.